It looks as if I’m in love with a new urban mystery series!!! I tend to be quite picky about my urban mysteries, but this series checks off so many things on my list. I’m very excited to have found The Spectral City series and I hope I’ll be able to convince you that you should start reading it right away too.

So let me start with a short list of things that fascinated me so much about The Spectral City series: 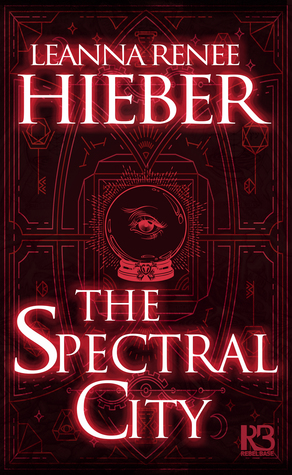 Check out on Goodreads
★★★★✬ 4.5 stars
How I read this:
free review copy from the publisher

The first book in the series is called The Spectral City, and while I enjoyed both books, I certainly enjoyed the first one the most. It sets up the tone so well and goes quite slowly, putting you into the whole situation bit by bit. This whole series revolves around Eve, a gifted psychic, who is building a police ghost precinct from scratch in New York, albeit with some support from big names, but mostly just a lot of scorn and distrust from skeptics who are mostly men – and they’re not just skeptical about the ghosts doing police work, let me tell you. It’s as if they’re more skeptical of the women, doing the police work! The precinct has already gone off to a nice start and Eve is happy with her results, when… One of her best ghostly assets, and a dear friend as well, vanishes. To get to the bottom of it, she will have to try her best, because this could be enough to put the whole project in jeopardy. So the search begins…

So What Did I Love About The Series?

I really enjoyed the setting. I have a weakness for books set in the not too distant past – perhaps the steam and industrial revolution age the most. I really loved this series by Emma Newman that had this funky steam power magic system, but sadly, it seems the series is now on hold (or I haven’t been able to hear anything new about it *sob*). So since reading the last book, I have been sad about not being able to read anything in this amazing time setting, perhaps even with a little magical twist. So although The Spectral City and A Sanctuary of Spirits aren’t about magic, the paranormal element (working with ghosts) and the time setting is EXACTLY what I’ve been looking for. I just wish more books were being written about this time period and fantasy settings!

A photo of me, staring with mouth agape at a train from the industrial revolution era in the London Science museum

As for the strong leading ladies, I think the time setting makes it all the more relevant. After all, that was the time when women fought to be recognized as equals, as in individuals, the most – or, at least, when they started the fight. Eve, the main character, fights on two fronts – she is trying to build herself and her colleagues not only a place to work and to be valued in the police force, but she’s also working through paranormal means and is trying to let the ghosts have their say. In Eve’s world, much like in our world, mediums are mistrusted about as much as women must also have been mistrusted back in the day, so Eve has a double battle to wage. This kind of story makes for some really powerful female characters. They’re women who have to fend for themselves, prove that they can, and because of the nature of their work, also prove that they’re not lunatics. Hard work!

A #steampunk, empowering and #diverse setting in an urban fantasy - what more could you ask for? Start this new amazing series by @Leannarenee now: Click To Tweet

While this book is probably not meant to champion diversity specifically, it does not shove it under the rug either. Most urban fantasies just carry on without any mention on this front whatsover, but The Spectral City has quite a bit of diverse characters: one is Jewish, another is of Native American heritage, and another one is trans. A lot of the characters suffer from some sort of impairments or even disabilities. Racial questions are portrayed less, but it’s certainly talked about in terms of the unfairness, the hardship, the double standards. The author takes care to mention the heritage of some characters, and they are definitely not only European-American of origin.

What appealed to me the most was that these books represent the “spoonie” status quite well. Since most characters have some paranormal abilities, they also have some illnesses or troubles that come along with them. One of them suffers migraines and bouts of weakness, another one has seizures. Quite a few of the characters speak ASL to accomodate one of their colleagues with selective mutism, and that’s not the only character in the book to have had it (there are like three!) I have to stress that most authors wouldn’t “go out of their way” (as it’s often considered, when it comes to these time periods) to include ASL, a trans woman and spoonies into a book that’s set at a time when none of this was recognized – but she did. It’s one of the reasons I truly loved this book.

The Lovely And Supportive Vibe

I also really loved the vibe in the books. Everyone cares about one another so much! The characters are, as I said, true softies, and I really like reading such stories. Perhaps to some it will seem sugary – but I don’t think it is. I felt like the vibe went really well with the time setting. Just think about books like Little Women – doesn’t it have that vibe? I can’t claim society was ACTUALLY like that back then – but we can definitely say that might have been an ideal of the time. And it’s certainly a pleasure to read.

An #urbanfantasy with steampunky vibes and the feel of Little Women? This is why @avalinahsbooks recommends it: Click To Tweet

Oh, finally this part! Could I swoon any more? I don’t know when I became such a softie – I’m usually not a big fan of romance, but I guess I’ve found my poison, and that’s slow-burn fake dating. So basically, not to spoil too much, but this book has a lovely trope – a pair of characters start fake courting to get their parents to stop meddling in their affairs, as well to prevent as a possible end of the career that just started for the female character. And this fake dating to appease the folks bait is just about melting my heart.

The fake dating couple so clearly have a spark between them, and it seems they are the only ones too blind to see it. There’s a lot of blushing and not understanding their own feelings, there’s shyness and all that – oh, I just can’t! I’m so invested and completely shipping it. Swear this never happens to me!

A drawing of a comic version of me, swooning over The Spectral City:
my eyes are hearts, and my curly head is steaming, while I’m intensely blushing

What’s Next In The Spectral City Series? 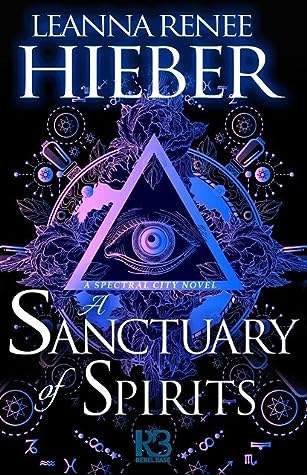 Check out on Goodreads
★★★★☆ 4 stars
How I read this:
free review copy from NetGalley

The book that follows and is being released right now is called A Sanctuary of Spirits, and I certainly enjoyed it too. Out of these two, perhaps my favorite would be the first book, but I certainly like where the story is going, and I am really putting high hopes into this series and can’t wait till the last one comes out.

A Sanctuary of Spirits follows the first book quite closely, and to me felt more like it was just another half of the same book, as I read them back to back. You know how some urban mystery series tends to come neatly packaged in little chunks, like separate stories? A Sanctuary of Spirits didn’t feel like that – instead, it felt like a cohesive story. The plot is quite large and overarching, and only part of it is uncovered in this one, so you’ll certainly want to read on. Of course, all the good parts are still present – the slow burn romance simmers on, we get to find out more about Eve’s past and get into the methods of her precinct some more. I can’t wait to find out where the next book will take us!

I thank the publisher for gifting me a free copy of the ebook in exchange to my honest opinion. This has not affected my opinion.

Do you have any favorite urban mystery or urban fantasy series to share with me? And do you enjoy ghost stories?