This book has been ABSOLUTELY WOW and if we hang out, I’ve already told you countless times that you need to read it. If I haven’t? Well, YOU NEED TO READ IT. There. And now onto the reasons why!

5 Reasons To Read Creature of Will and Temper 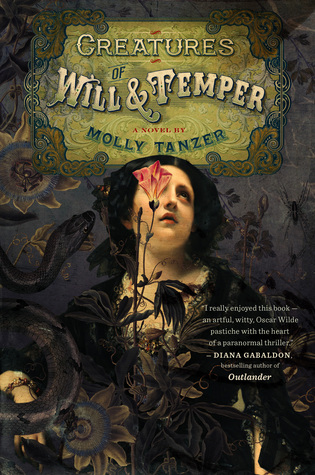 Essentially, it’s a retelling of Dorian Gray. But it’s also very different! First of all, the main characters are girls. Two sisters, Evadne and Dorina could not be more different from each other – Evadne is homely, but strong, loves fencing and is a simple person, while Dorina is a beauty, brimming with life and hoping to experience everything passionately. Over a disagreement, they both get marched off to London to visit their uncle, where they meed Lady Henry, who is quite progressive for her time, and… Well, is a diabolist (it means, summons demons). Things move on from there…

This story is about so many things! Love, passion of life, passion in general… Appreciation of beauty, and even just finding yourself. Also, with impeccable style and fabulousness!

The story is told in the third person, but between two perspectives – Dorina and Evadne’s. What’s amazing is that they are basically polar opposites, and the author does a great job representing both of their points of view! Which means, it presents both of their hurts and complaints about the other, and does not defend either one. It’s very objective, doesn’t demonize or defend either of them either, does not judge. You can’t pick a side between Evadne and Dorina, and that’s the charm of it.

(Wrong story, I know! But the GIF totally works!)

Queer In The 19th Century And Not Bothered

Truly in Oscar Wilde’s tradition! Most of the characters are queer in this book, and very vibrantly and enjoyably so! It really works for them. I can’t tell you whether the quality of the rep was good or not cause it falls out of my realm of experience, but all I know is that these characters were a pleasure to read. There’s no pathos about characters being queer (“look! I’m being diverse just to be diverse!” – you know what I’m talking about, some books do this). They just are. In a very honest and natural way.

The Battle Between New And Old

The intersection of the 19th and 20th century: challenges ideas of class, dress and society, especially regarding women and sexual orientation, or just societal norms. Dorina and Evadne symbolize two generations – one is willing to embrace it, the other is unwittingly angered about it, and although she’d like to go with it, she can’t shake propriety. Lady Henry, meanwhile, challenges every belief that of those times by basically flat-out acting like a man. Of course, I find it hard to believe a woman wouldn’t be institutionalized for something like wearing men’s clothes back in that day, or consuming tobacco in public. No matter who she was, or how rich she was. So this calls for some suspension of disbelief, but all in good cause. And it certainly spiced up the story!

Demons And Swords! …And Vigilantes!

Come on. Do I have to elaborate? They summon demons and some of them fence. It’s brilliant! The demons here aren’t evildoers necessarily – they are not always interested in our affairs or meddling with the world. Some of them are pure consciousness that wants merely to appreciate, to enjoy through human eyes. I believe this fits SO well with the Oscar Wilde theme of Dorian Gray – embodies the hedonism so well. You will also read about Lady Henry’s society of appreciation of beauty. Would it be really corny to say I appreciated that a lot? (YES.) As for the swords? No, but seriously. It should just speak for itself!

Just take my word on it! Alright, so you’ll have to suspend your disbelief at times, but hey, isn’t all urban fantasy kind of like that? I particularly like books like this though! It’s not just ever so slightly (and stylishly…) paranormal, it’s also a little bit steampunk through being based in Victorian times (I wouldn’t say full on steampunk, though), and it’s got just the right amount of darkness in it – a mere pinch, all it needs! It reads incredibly comfortably, the characters are great and it moves at just the right pace. What I also liked was all the art appreciation. I mean, it was about an appreciation society! And so much drama between the sisters, and you’re unable to take a single side! I absolutely loved this book and I believe you probably will too.

I thank the publisher for giving me an early copy of this book in exchange to my honest opinion.

Have you read any books like this, and would you care to recommend? Have you heard about Creatures of Will and Temper yet? Are you going to read it?