The Spec Set is not your typical YA. It’s actually not your typical book at all – I’m not sure I can even place it! It’s a unique bird, a true genre bender. But if I had to find a couple of words to characterize The Spec Set, I would say… Fast, surprising… Explosive. Both literally and figuratively! It turned out quite different from what I was expecting it to be, although I’m not even sure you can convey an adequate enough picture in a blurb for a book like this. When I picked it up, I wasn’t sure what I would get, but it checked off certain points that I liked – disability, neuro-divergence, empowerment and possibly a scifi adventure. Yep, all those were there – but the book was quite different than what I expected it to be. It was a wild ride indeed! But I can say I enjoyed it. 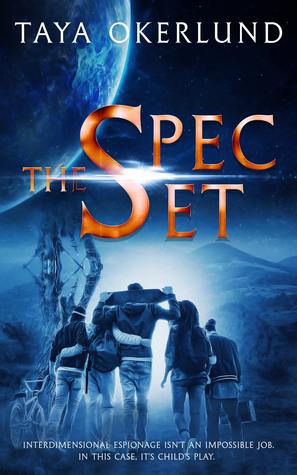 It all starts quite innocently: a neuro-divergent 12 year-old Max who has a serious sensory processing disorder and is selectively mute, wants freedom to see a therapist he chooses for himself. Despite having tried dozens of different specialists to help his son talk, his dad doesn’t feel like allowing him to choose. So Max has to wrangle a complicated plan to at least get to spend the summer with his therapist’s daughter who will be staying at a science camp. Of course, Max’s older brother Emile (who is also neuro-divergent and has pyrrole disorder) gets caught in the crossfire of the conflict, and this is where he gets involved in the story.

All sound innocent so far? Sure it does… Little did you know though, that in about 15 minutes this situation will involve the FBI, the CIA, explosives, kids with superpowers and wormholes into another world… Yup. Stay with me.

You’ll Never NOT Be Surprised By The Spec Set

Okay, so I might have worded that in a bit of a complicated manner. But what I mean is that what I was expecting was a light YA, maybe a contemporary with some real life struggles of neuro-divergent teens, maybe some added adventure that would empower them – all in the limits of our natural, normal day to day.. But that’s not at all what The Spec Set is! It’s no YA about a science camp. Shit gets very real, very fast in this book!!! And the funniest thing is, when you think that shit is already pretty real… Well, it gets EVEN more real. And even then it’s not done getting more real.

It’s like when I said that you could call it explosive, both figuratively and literally. That statement really describes it the best!

A GIF of someone in a… funny yellow costume, running away from explosions

Another thing apart from the crazy pace, is that it didn’t just have the urgency that’s common in many YA adventures – it also had this wild scifi / fantasy side to it, and I TOTALLY did NOT expect it to go there. At many points in this book I lifted my eyebrows, did a double take or opened my eyes wide at what was going on, only to have to ask myself again and again, if this is still the same book that I’m reading? The one where a bunch of kids went to science camp..? And now… wait, how?

A GIF of a baby, very intently and urgently reading a picture book

However, that part wasn’t actually confusing. I would say it was entertaining! I’m not sure I’ve ever read anything that surprised me more than The Spec Set – not even The Illuminae Files surprised me that much (gasp!) Like, okay, the twists in The Illuminae Files are amazing, but they come from the same setting, and you can sort of see them in the cards, when you look back. They make sense. The twists in The Spec Set? Man, I would have never seen it coming. Not in a million years. This might be a thing about the book that some readers may not enjoy – precisely this thing where the author keeps pulling tricks out of the hat and you have no clue how the story got there – but I don’t know, I enjoyed it. If only for the originality and how I’ve never actually read anything like this, The Spec Set has my vote.

A GIF of a skull, with pictures rapidly changing inside of where the brain should be

Another important thing to talk about is that The Spec Set both has diverse characters, as well as neuro-divergent characters. I won’t talk much about diversity this time, although it’s also present in the book, because I want to focus on neuro-diversity. Diversity is an important issue in fiction, but at least we’ve already started the dialogue about it. Meanwhile, neuro-diversity and neuro-divergence remains a largely avoided subject, and there is so little fiction released with characters who are neuro-divergent.

Neuro-divergence can be a complicated subject to write fiction on – purely because there are so many kinds of it, and not all kinds can be represented by the people themselves – some types of neuro-divergence won’t allow the people to actually tell their own stories because they might have limited functionality in society or other challenges that prevent them from doing so. Essentially, there are also so many ways of being neuro-divergent, that even #ownvoices tales can be relatively limited, because one person’s experience might wildly differ from another’s. Well, The Spec Set comes from an #ownvoices author who also comes from a very neuro-diverse family. So she knows what she’s talking about, but even so, neuro-diversity remains a topic of debate when it comes to fiction and language in general, because it’s a spectrum both in terms of abilities and the challenges that these people may deal with (again – not everyone necessarily experiences them as challenges! But some people do.)

And I believe this is part of what The Spec Set is about – that to some of them, being “differently wired” is just a way to be, and to others, it may be very restricting and a taxing way to live. That some would never change it. But some would. Because we’re all different.

As I said, it’s no contemporary. It’s a scifi fantasy, so these kids don’t just have disabilities or aren’t just simply on the spectrum. They also have some powers that come with that. In the afterword, the author says that this is not the case in reality, that being neuro-divergent usually doesn’t mean you’ll have some savant capabilities or anything, much less X-men like powers. So I think the reason this is part of the story is simply to empower kids like that, and act as a parable to their ‘differentness’. And it does empower them, in my opinion – they’re superheroes of a sort, and they’re fully in charge of their situation. You don’t often see neuro-divergent people depicted as the silent superheroes, and I enjoyed that.

We could descend into debates of whether it’s right or not right for neuro-divergent kids to be portrayed as something they’re not in reality, or wanting to change who they are. But I suggest not to debate this – instead, I suggest imagining how a neuro-divergent teen might feel, seeing a kid like themselves, empowered with ability, choice, and quite simply kicking butt. Imagine a kid seeing a character question themselves if they’re okay the way they are, or whether they should change, given the possibility. These are questions we all ponder sometimes, especially as teens, so it’s natural that neuro-divergent teens will have them as well. Now imagine those questions enabled to them by being written in a book, and the teen not feeling alone in asking themselves that anymore. Do you think that’s empowering? I think I do.

Overall, this is one hell of a story. It might blow your mind, or you might think it’s far fetched and too fast for you. Or you might laugh at the wild ride like I did, and appreciate these kids kicking the life out of all the obstacles in their way. One thing’s for certain though – you won’t read anything like this for a while, or maybe ever. It’s different, it’s fast-paced and it’s quite wild.

The Spec Set by Taya Okerlund, ★★★★☆ 4 stars: A Fast, Surprising And Explosive YA With Neuro-divergent Characters Click To Tweet

This is quite an explosive story, as I said, so there will be quite a few triggers. They include

Have you read any books with neuro-divergent characters lately, or at all? Are there any you could recommend?