I was sooooo excited when I found out that there was going to be a sequel for Spinning Silk, a paranormal fantasy set in Japan I greatly enjoyed last spring! Of course I jumped at the chance to read it, and after I did? I’m even more excited! Cause there’s going to be part 3! I was lucky because I got to read it as a buddy read with Dani @ Perspective of a Writer, so we will both be reviewing it buddy-read style. If you’re not familiar with this format on my blog yet – we both give each other questions to answer, so the review is kind of like a little interview. I hope you enjoy it! And Dani’s post with my questions and her answers can be found here. 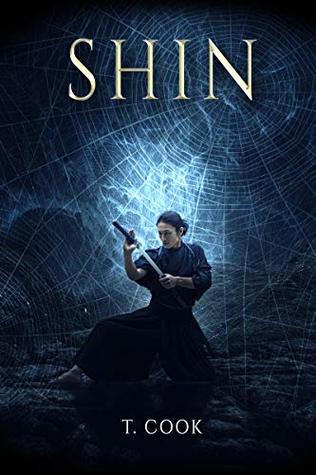 In Spinning Silk, we learned the sad story of Furi and Shin, a love that was always destined to end in pain and sacrifice. Furi, a silk weaver, endowed with exceptional powers at her craft, lives a hard life as a slave, and Shin just happens to be there to help her out and place her in the right spot for what needs to happen… And what needs to happen is the death of a very important person in the government. But neither Shin nor Furi will be happier after the outcome.

Shin is sort of a retelling of the same story – however, through the eyes of Shin, and not Furi. The book reveals so much about how both Shin and Furi were pawns in a much bigger story of political games – games between humans, games between gods even. This double way of telling it gives a lot more insight on what happened and why, and it gave me so many answers to questions I had after the first book. And hope for the story to continue!

Dani: I went into Shin expecting to learn new things about the events in Spinning Silk, but from Shin’s POV. How does this jive with your own expectations and what you found reading Shin?

I was so happy to find all my questions answered! I felt like Spinning Silk ended quite abruptly, and I didn’t quite get what happened in the end. Shin answers these questions perfectly – everything just snapped into place and made sense after I read it. Moreover, it tells the story so beautifully – it fills in on the emotional detail I might not have picked up in Spinning Silk. I think these books have to be read together, even though it is said that Shin could be a standalone. They just compliment each other so well. So when it comes to expectations, Shin definitely exceeded mine. I loved it!

A GIF of a teddy bear, being buried in hearts

Dani: The folklore and mythology, “Japanese Spider Spirits mashed with Tanabata folklore traditions” was a major reason I read Spinning Silk, but it didn’t end up being an aspect that occupied my mind while reading. I found we learned so much more about it in Shin. Yet it was an aspect of the story I enjoyed in both books. What did you feel about how and to what length the folklore was explored in Shin compared to Spinning Silk?

This is another thing I enjoyed about Shin so much! I felt like Spinning Silk had folklore, but maybe it wasn’t expanded on so much – you just sort of felt it in the background. But in Shin, everything is explained much better. I feel like it makes sense too, since Furi didn’t know anything about her origins, and since it was told in her voice, we knew as much as she did. But with Shin, everything is very different – since he knows a lot more than Furi does, and we get to learn from his perspective, so we get to find out too. Does this make any sense? It’s how I felt reading it anyway.

Dani: Since much of Shin is following the same events as in Spinning Silk did you feel there was enough added to the story coming from Shin’s POV? And was there a moment in their joint history that you wanted explored MORE?

Oh yes, definitely! I think it was also good that a half a year passed betwen me reading the books, so I forgot quite a bit of the story. I appreciated it so much that the author loosely explained the events and reminded me what happened. I felt like it wasn’t too repetitive – but just enough to give you a recap if you read Spinning Silk a while ago.

I couldn’t say I wanted any moment to be explored more! That’s the thing – I kept wanting moments to be explored in Spinning Silk, but that’s what Shin did for me. I now feel like I have all my questions from the first book answered.

A GIF of a cat reading a book, with glasses

Dani: Both Shin and Furi were born into difficult circumstances that seemed to direct their lives no matter what they wanted for themselves. Did you notice this about their journeys and how relatable is this to you as a reader?

Yes, I felt like this was a really strong running theme in both the stories. It’s also interesting how it was presented differently for both characters – because it seems that fate pushed Furi in the direction of creation (weaving, also continuing the bloodline), and Shin – in the direction of protection, nurturing (fighting for those he cared for, healing them with his knowledge). It was an interesting way to represent the feminine and the masculine in the story.

It is, however, sad to see both Shin and Furi being thrust in directions they did not want to go to, in what seemed like a destined, inevitable manner. Both books are filled with this constant premonition and the struggle of duty, or destiny, to do something you don’t want to and would, in fact, rather do the opposite. I feel like this made up a very important part of the story though. This hopelessness, this destiny is what made the story what it is.

A GIF of a tear rolling off a women’s cheek

Dani: Reading Spinning Silk the romance didn’t feel like your typical slow burn romance even though that is the trope it falls under… I really enjoyed how subtle it was compared to most romantic storylines. How did your views on Shin and Furi’s romance in Spinning Silk change and/or evolve after reading Shin?

It made the story so much more real to me! I am not a fan of romance, at least open and sweet romance – so this was the perfect way to write it for a reader like me. It’s unintrusive to the point that even the characters are basically stumped when they figure out they have feelings for each other. And the tragic nature of their love made the story all the more real for me. I really enjoyed the way it was written. Also, Shin made the romance more believable for me – somehow when reading only Furi’s side, I was more skeptical about their feelings.

Dani: In Spinning Silk the magic in the story was soooooo subtle and mostly happened off the page in a mysterious manner. In Shin we know where the magic comes from, how did this affect how magical you felt the story was and did it affect your enjoyment of the story?

I think that was part of why I understood the whole story so much better. It was kind of missing from Spinning Silk from me! It’s not that I didn’t quite understand how things worked, but that it bothered me that it wasn’t explained, especially Shin’s mysterious disappearances or how things ended up after Furi had her blackouts and seemed to attack people. It’s explained so well in Shin.

Dani: The main characters of Spinning Silk and Shin are obviously Shin and Furi and they occupy the page the majority of the time. But both books are populated with some extra special secondary/minor characters that I love. Which of them was your favorite and which would you like to learn more about, perhaps through a novella from T. Cook?

I was really surprised to learn more about the nature of the Madam who took care of Furi! I think I did pick up on the fact that she was also paranormal in Spinning Silk, but I somehow hadn’t picked up on that she was quite so important! She was also a character I loved in the first book. I was so excited to find out more about her true nature, and yes, I’d love to read more about her!

Well, first of all, of course you’ve got to read Spinning Silk, the first installment of this story – you can find my review here. Then, there’s The Four Women – I have recently reviewed it here – it’s a dark and somewhat paranormal story set in modern day Paris, and although the setting couldn’t be more different, the levels of despair and the love story is quite akin to that of Spinning Silk and Shin. The other two books aren’t as similar, but they had similar running themes. The Breedling and the City in the Garden is a fantasy set in the beginning of the 20th century, and it’s also somewhat dark and has a whole separate magical universe alongside the normal human one. You can read my review here. And The Mermaid and Mrs Hancock might be the story that differs from these most of all – it barely has any paranormal in it, but it’s soaked through with darkness, and there too is an unlikely love story. You can find my review here.

Be sure to head on to Dani’s post to read her take on this book!

Do you enjoy paranormal fantasy or folklore settings? Have you read Spinning Silk?