I’m still reeling after finishing Shards of Earth – what a story… For those who have experienced Mass Effect (re-released this week, by the way! My husband is playing it as I’m writing this post), I can only say that it’s a very similar story, both in terms of how grand, amazingly written and dark it is. If you’re a fan of stories like that, you will not be disappointed.

It was just an amazing book, and now I have no idea how I’ll wait for the next installments. This is a book of some 560+ pages – and I gobbled it up IN TWO DAYS. I wasn’t able to move away from it. Now that I’m finished, I am still not sure I’ll be able to move away from the grandness of it for a long time. I’m still just thinking about all that happened.

TL; DR: if you loved Mass Effect, you MUST read Shards of Earth. 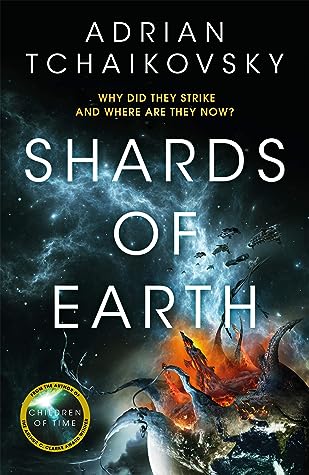 Check out on Goodreads
★★★★★ 5 stars
How I read this:
free review copy for blog tour

This was my first book by Adrian Tchaikovsky, and I quickly learned that he’s amazing at writing battle! I’m a reader that’s hard to keep interested in battle scenes, but this book? It drops you straight into the action, onto a spaceship, and things are HAPPENING. I could immediately feel my heart hammer faster. The pages melted – and that helps when the book is like 560 pages long!

I also loved the quite diverse cast. This book features a mostly-cloned (genetically grown?) warrior women race, like a clan of Valkiries with impeccable discipline – they represented a very strong fighter woman element. Yet, being born very able-bodied (stronger than normal humans), they weren’t the only strong fighting woman type in the story.

The ship crew that we follow also contained a woman who in all respects would be considered born disabled in our society, but she was incredibly strong and capable in the story, and valued for her skills, which were simply placed elsewhere than able-bodied people’s (she was able to control artificial systems and fight with the help of technology, which she was also very good at repairing and creating.)

Both women were very tough! Aside from that, the book also normalizes nonbinaries in society, and that aside, of course there are a couple non-humans on board who make it all the more interesting to be around them and learn their differences and how they function and communicate with the humans. 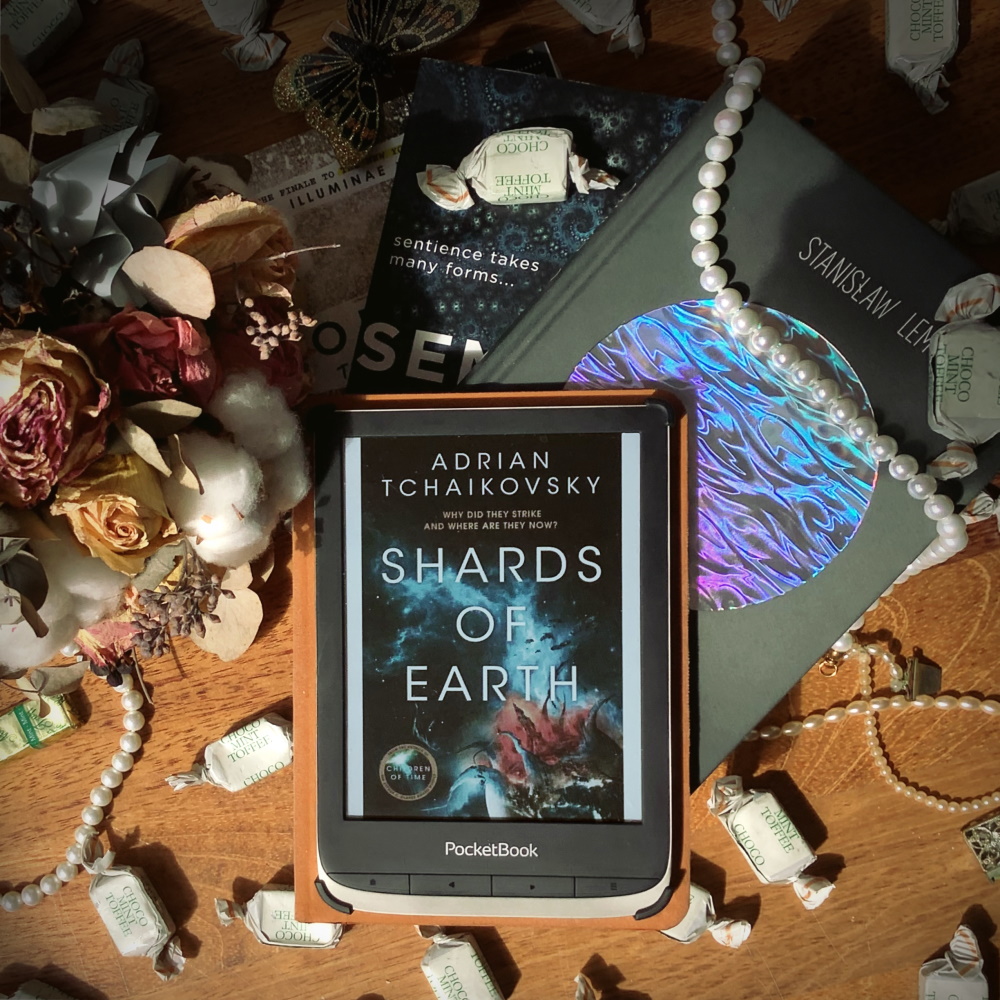 An image of the cover of Shards of Earth by Adrian Tchaikovsky on the screen of a PocketBook Color, with some other scifi books under it, candies and some other items all around it; Photo by AvalinahsBooks

There was one notable thread of character clash – between the genetically engineered woman and the disabled woman. Olli, born disabled, hates the Partheni’s guts – because she believes that if they were to take over, people like her would cease to exist (or rather, would be “corrected” out of humanity’s genetics). And she is right to be angry on that part. But on the other hand, this particular Partheni woman didn’t create her race – she doesn’t want to change anyone else into a genetically modified human. It’s just that she was made and born that way, and of course she loves her sisters and the rest of her kind. They’re her home – and you can’t blame her for it either. I’m not summing up the whole thing here, but I thought that clash between these characters was very well written, and challenging, and both points of view were presented as very valid.

In this conflict, I don’t know who’s right. It made me think a lot. It made me feel a lot. And that’s a good plot and good writing. Moreover, that’s a good way to stress society issues we are beginning to have now ourselves – what with the way to check DNA and “eliminate” issues in the womb, which is rightfully incenscing a lot of society groups at the moment. It’s an ongoing issue that will only escalate as the 21st century progresses, so it’s only right to talk about it in fiction. 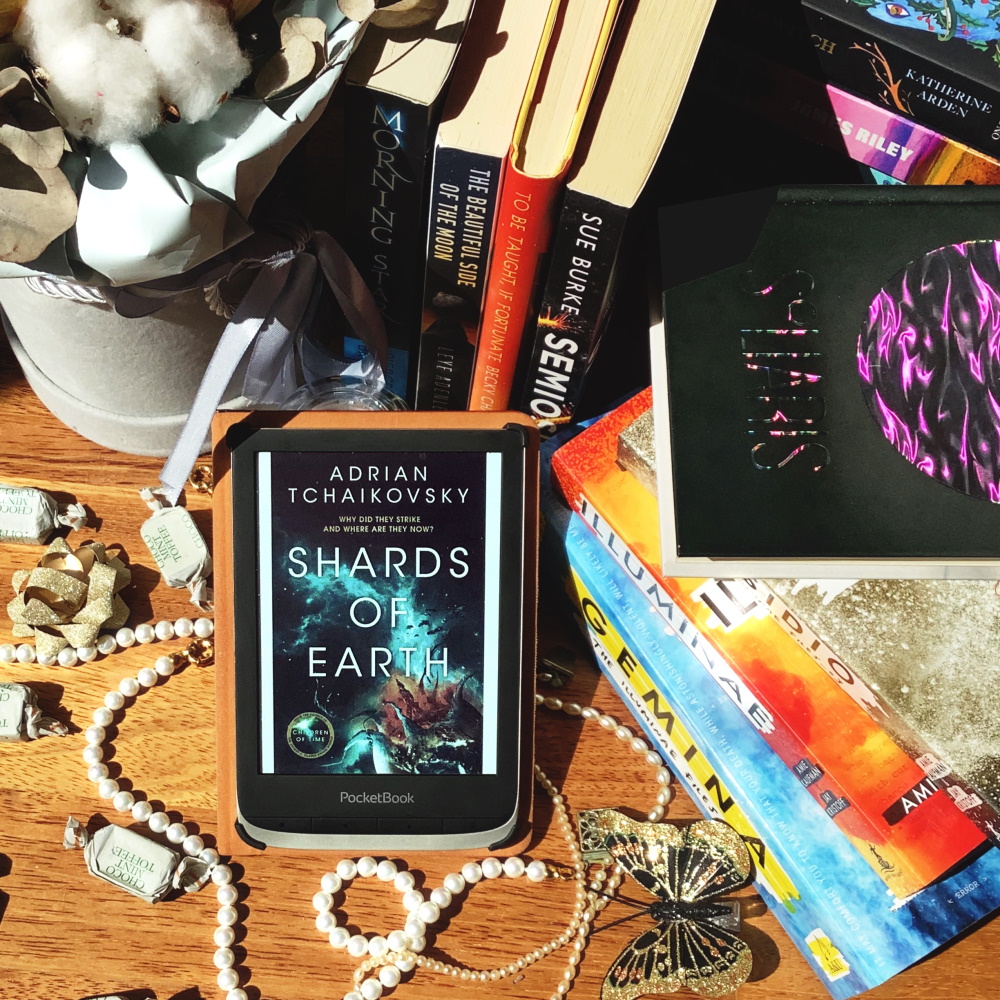 An image of the cover of Shards of Earth by Adrian Tchaikovsky on the screen of a PocketBook Color, placed in the left bottom corner of the photo, with other scifi books on the right, necklaces and candies around it all; Photo by AvalinahsBooks

I can’t help feeling like Shards of Earth reminded me a little of A Long Way to a Small, Angry Planet by Becky Chambers. They are very different books and the stories and plots themselves are very different – Shards of Earth is a much grander, darker plot that involves not just just the crew, but entire worlds and civilizations at large. Meanwhile, Small Angry Planet was more about specific persons and their histories.

However, the ragtag crew and the way they interacted reminded me a lot of that story. And that’s how I knew I’d definitely love the book – if you love the crew, you end up loving the story. There is something incredible about an odd mixture of very different people, all written in a way where they just come off the page. Scifi lets authors accentuate character traits through outward appearances, even races different to humans can lend an intensification of some character traits. It’s part of why I have a long running love story with scifi.

And the best part is that seemingly all the characters have some sort of secret – at least, the central ones. And it’s a slow reveal – you get to guess at all the reasons they might be doing this and that. And then you find out. And it’s not quite what you thought.

Shards of Earth is an unforgettable #scifi – grand and sweeping, and yet, also detailed about the immediate members of the crew you follow. It's a must read: Click To Tweet

It’s also one of those books where the author actively engages in torturing the reader – by making the characters irresistible, and then plucking them away from you. Wherever they go, there’s trouble and they’ve got to devise yet another way to get out of it, it’s just so active! The next thing you know, you are suddenly able to read into the subtle cues that a non-human gives to transmit secret intent that even the crew isn’t quite reading into. It’s an experience, this book, and it’s great. I haven’t read such a good scifi for a long time, and I truly can’t wait to read the rest of the series.

Shards of Earth by Adrian Tchaikovsky was AMAZING. I absolutely can’t wait to read the rest of the books in the series – and I can’t wait to pick up other books by this author that have been recommended to me by friends before. The Final Architects is shaping up to be an amazing scifi story, grand and looming, one you couldn’t possibly forget. The first book felt comparable to the Three Body Problem by Liu Cixin for me, or Mass Effect, if you’re a gamer – and that’s a measure of AMAZING scifi. I can’t wait to read more! 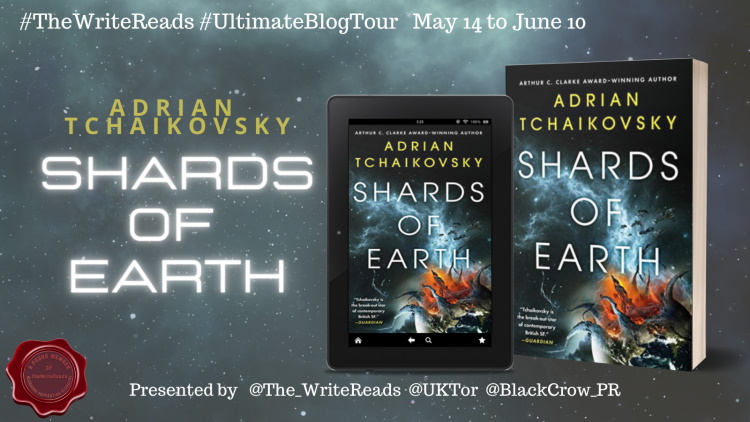