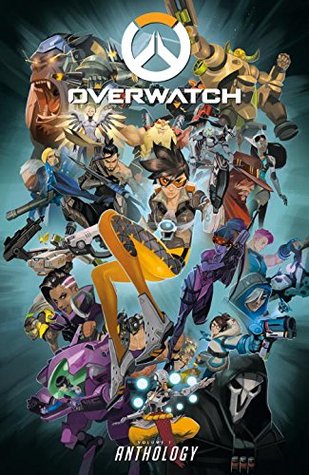 Check out on Goodreads
Get at Book Depository
★★★✬☆  3.5 stars

Ah, Overwatch. The only place where telling the time on your stopped wristwatch is foreshadowing mass manslaughter (at least, you hope so)

Don’t you wonder where it all started for our rag-tag band of heroes / villains / … Wait, why are you here? Well never mind that. This Anthology is essentially a mashup of various official Blizzard Entertainment Overwatch comics that venture into the lives of our characters and the events they’re part of, so we’ll probably get a linear story out of this, I’m sure of it! The important thing for now is that finally, in book form, we have all the answers to our questions. Why did they join Overwatch? When? What are their origins, yep, all our answers lie within these covers. Or do they?

So did it meet hopes and expectations?

Really, the answer to that is both yes and no. The fact is, if you were hoping for an actual progressive story to start forming within the background of these panels, you’ll be pretty disappointed. That’s not to say there is no story, there’s tons, but it’s all scrambled, from the order of presentation to the setting and mood of each piece. Blizzard are clearly very careful not to blur any lines, if they want you to understand something about a character, you will immediately recognise it, but if they feel that it’s not in their interests to put that heavily shipped fan theory to rest one way or another, well, keep hoping, OK? Your head canon will work someday!

The Tactical Visor led to some real gems though.

So I want to make it clear, I LOVE these comics, they clearly focus on the re-launching of Overwatch, so we get a fresh approach from “where did they start” to “where are they now?” If you’ve followed the lore up to this point, boy you’re in for a treat, get ready for an Earthshatter cause these are breaking some serious ground. While they don’t create a vivid sense of progression and direct understanding for each hero, we do learn to feel the characters here, and we’re lucky enough to follow the trail of our old soldiers a little further than the rest, so in that way, it’s definitely well accompanied by a cup of tea.

Alright Ebil. That’s all great, but, where’s the Bastion?

OK, so there are some problems and this is why I can’t bring myself to give it a 4+ star review! As is usually the case with game lore, these comics are just too sparse in terms of length and content. Not only do we end up without a real sense of “place” in the story, but we find more questions than answers. Despite having trawled the internet for lore, some of the concepts referenced are simply too vague due to a reluctance to lock themselves into a certain path or history. You can’t really blame them, but when someone perhaps less well-versed sees the gorgeous artwork (which is 10/10 btw) and looks into it, I would imagine they’d be more lost and disappointed than I was. It definitely suffers from “pre-requisite knowledge” and I can’t overlook that. Even with the knowledge certain aspects still leave me puzzled.

At the end of the day, these were free extra fan service comics, they’re aimed towards the nuts who live and breathe the game and just want more. It’s quite possible that my slight disappointment is only due to the fact I wanted a meaningful story to be told, but these short tales aren’t for our heads, they’re for our hearts. I feel more connected to each character, like I understand them more, their motives. If you take the time to read the backstory, these comics make you understand why they’ve become who they are now, and that was Blizzard’s aim. Who knows, this is volume 1, maybe the story I’m looking for is lurking around the corner as sure as a Reaper with Death Blossom…

I thank Blizzard Entertainment, Dark Horse Books and Edelweiss for giving me a free copy in exchange for an honest review.

Did you read any of these comics when they were released online? Do you play Overwatch? Most importantly, what did you think of my first review post? Share all that and more with me in the comments below!