Otherwood was a brilliant story, and I loved it – but I also sort of don’t know what to make of it? It’s one of those stories that you understand more subconsciously rather than in a straight-forward manner. When I got the review copy, I expected it to be a fantasy woodsy tale, but it’s nothing like that – it was something much bigger, weirder and more interesting. Otherwood was beautiful, wistful, poignant and had the right amount of magical realism to make it just that much of an enigma. This story will swirl in your mind for weeks to come. 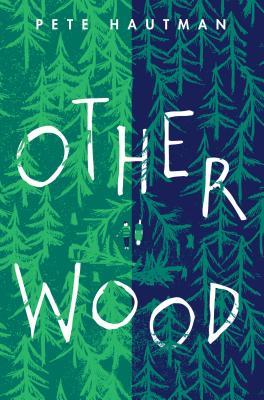 Stuey recently lost his grandpa, and Elly’s parents just moved back in to their family’s old home and so she has nobody there. It’s no wonder the kids become good friends.

They both like hanging out in the woods, but they don’t know that those woods hide many stories – some of them nobody living even knows about anymore. But the tendrils of secrets can make any bright story dark, and one day something unthinkable, and really really strange happens.

Unfortunately, nobody really believes Stuey’s story, and since he is only nine, he soon stops believing his own memory too. But is there a way to explain what happened that day that changed everything? And to unwind all the mysteries that surround the past of their two families?

Change Of Mood Builds The Story In Otherwood

Otherwood starts out as a really cozy book. And it’s not even related to what happens, sad things happen too – it’s just that the storytelling is somehow cozy. Everything seems safe and warm, like the safety of childhood – that ‘knowing’ you have inside that nothing bad can truly happen.

The two main characters, Stuey and Elly live in a really sleepy place, by the forest, where life is slower than anywhere else – they even call themselves free-range kids – cause they can run around pretty much anywhere they want. There’s a sort of sense of freedom in Otherwood that a city kid like me could never dream of experiencing. I liked imagining it while I was reading. The rays of the sun seen through the mist in a sparse forest; Photo courtesy of marcelkessler from Pixabay

But then there always comes a time when you must grow up. When you must abandon that feeling of ‘everything is really only good’. Because bad things happen, everyone suffers some kind of loss sooner or later. Perhaps you remember this moment from when you were growing up yourself – when you lost that childish innocence.

So the mood of Otherwood shifts – gradually. It really reminded me of the shift from your childhood into your teens – suddenly, everything is unclear, everything is shaky – and you definitely expect foul play at every corner. It felt like the mood turned into something like that as well, and I feel like it really affected the storytelling. This book built its story on mood, and I felt that it was done very well.

That same ray of the sun, through a dark and foreboding forest; Photo courtesy of Martin Winkler from Pixabay

Otherwood builds its storytelling through the mood – cozy to dark and foreboding, and the mystery becomes intense: Click To Tweet

Okay, so Otherwood is not about ghosts – at least, not in the creepy sense. But it is about ghosts as secrets, unable to disperse unless they’re uncovered and put to rest. Family secrets, secrets that the living don’t even know anymore, create a rift in Stuey’s and Elly’s world, and have deep repercussions on their lives – despite no involvement of their own in the affairs of their great-grandparents.

It was a really strange story, and I know I will be picking it apart for weeks to come – but at the same time, it’s more like Otherwood is about the symbolics of things. The magical woods, merging realities and the power of hidden things to destroy, the power of truth to rebuild. I really can’t explain more because I’ll give you spoilers! You really just have to read it for yourself. It’s a really strange story, but it’s strange in the best way possible, if you know what I mean.

Otherwood is about the magic of the forest, merging realities, and the power of hidden things to destroy, the power of truth to rebuild: Click To Tweet

Elly and Stuey are new friends, and they’re kids of two families that were in sort of a feud years and years ago. It’s all forgotten, for the kids – and they’re too young to really understand it anyway, but not so for the adults, despite being it three generations old. Old feuds bring ghosts with them, secrets that tear at the fabric of reality, in the case of Elly and Stuey.

There were many reasons the kids’ families didn’t agree – most of them were differences of background and circumstance, some just personal history between two men. But there’s more to that – there was history of racial hatred as well. Elly’s family is Jewish, and that was grounds enough for Stuey’s great-grandfather to deny her family from his country club, among their other disagreements.

Stuey doesn’t understand this – and he also doesn’t understand why Ellie’s mom doesn’t want Ellie hanging out with Stuey anymore – after learning he comes from that same family. A past of bigotry is getting in the way of two children’s friendship – children who don’t understand why people would treat someone differently due to their race, heritage, outward appearance or religion. Two children, holding hands in front of a sunset, facing a train track or walking along it; Photo courtesy of mores345 from Pixabay

Stuey’s mom explains this complicated past to him, and I really liked his section. While she understands that the deeds of her great-grandfather have nothing to do with her and she personally never felt this way, she can also understand why Ellie’s mom is holding a grudge – even though she personally was never affected by the action of the great-grandfather – the bitterness that her parents and grandparents felt travels through generations. Stuey’s mom explains to him that while this family history of hers – a great grandfather who was a bootlegger, avoided the law, excluded different folks from his rich people’s country club – seemed romantic and “wild west” to her to hear about when she was a kid, later she realized how sad and misguided it was, and how regretful she feels that she personally can’t do anything about this family history.

I can’t even explain this in my review, because it’s such a hard topic – but I felt it was done really nicely in the book. It just gives you this feel, like how you understand that Stuey can’t do anything about his family’s past, and it’s not his fault at all – but at the same time, you also understand that it was absolutely wrong of his great-grandfather to do what he did, and that Ellie’s family has a right to be angry – although they shouldn’t hold it against a kid who just happens to be a distant relation of a man who was being bigoted towards others. So it shows that when an unkindness is done to someone, both sides lose, eventually – nobody wins.

In Otherwood, forgotten family past threatens the friendship of two children. Only the solution to the mystery can unspool it all: Click To Tweet

This book has a very strange way of telling a story of dealing with loss and PTSD. It uses magical realism to tell it, and it is a little bit confusing because it’s hard to reconcile it with the true reality. But then again, it also makes you think, what is ever real? Do we ever know the two sides of the story, any story? And what if our memories of traumatic events aren’t actually what happened?

Experiences shape us, and some things you just can’t come back from. You have to deal with them, and it’s not always easy. This was dealt with in a really masterful way in the story, and it made me think a lot about how we process loss.

Otherwood is about processing loss, among other things – how hard and confusing it can be, when everyone seems to want to tell you how you're supposed to feel and what really happened to you: Click To Tweet

Otherwood was a memorable story. I’m not sure if it’s a story for kids, as it seems to be marketed – it IS a bit dark, in my opinion. But it was amazing and certainly philosophical. I can recommend it to anyone who likes a touch of mystery and magical realism in their fiction. I know I’ll be mulling this story over in my head for weeks to come.

Otherwood was beautiful, wistful, poignant and had the right amount of magical realism to make it just that much of an enigma. This story will swirl in your mind for weeks to come. Click To Tweet

What are some books that you started expecting one type of story but ended up with something completely different, although in a good way?