I feel like if I wanted to give The Royal Abduls a proper review, I’d have to write a whole other book about it – I just can’t see how I would put it all into a single-post review. This story was great, and it’s just so full of everything – it covers a large variety of topics, but the most important thing – it does it all very well. It’s not too much, and every subject goes in pretty deep.

In short, it’s a book about not knowing where you belong – both culturally, as well as individually, but it’s also a book about abandonment, growing up with divorce, without roots. It’s about assumptions, labels people give each other, things we think about others and ourselves and how those things can be unexpectedly different – in both good and bad ways.

It’s also about helplessness, perhaps helplessness we train ourselves into, and all-engrossing loneliness that seems to be becoming more and more ubiquitous. And, to be honest – those are not even all of the topics. For example, a sprinkle of women’s struggle in academia is also definitely there.

Even if I wanted to, I’m sure I wouldn’t be able to name everything that was covered in The Royal Abduls – it felt that extensive. And that’s exactly why I strongly recommend to read it.

It's impossible to sum up The Royal Abduls in a review – this book was so full of deep themes. Belonging, abandoment, loneliness – it's all there. Read more about The Royal Abduls: Click To Tweet 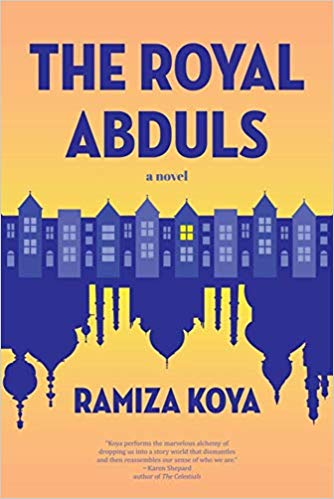 Check out on Goodreads
★★★★★ 5 stars
How I read this:
free review copy through NetGalley

Amina just broke up with a long-time boyfriend and changed her job – she’s moving closer to her brother’s family, and she is hoping to be more present in their lives. However, things aren’t all great there either. Amina is a second generation Indian in the US, basically, she feels more American than Indian – only English was spoken at their childhood home, and they never practiced the religion of her family – her parents never pursued it. So it’s very strange to her when her father suddenly develops and interest in India out of nostalgia and gets his grandchild Omar, Amina’s nephew, interested in it so much that the kid even develops an Indian accent – despite both him and his parents being born in the US.

Things escalate from there, and Amina needs to cope with both her, her brother’s and her nephew’s problems. The Royal Abduls is about breaking points in life – when a whole waterfall of stuff assaults a person all at once. It’s also about identity – finding one, when you’re not even sure where you actually belong. And frankly, it’s about much more than that – this story is complex and incredibly deep.

The Royal Abduls is about breaking points in life – when a whole waterfall of stuff assaults a person all at once. But also, it's about discovering your true self: Click To Tweet

Amina Was A Character I Loved And Could Relate To

Amina is a nice, relatable character. She is kind of lost, a little resentful about how academia and life in general works for introverted women. She’s not sure what she’s doing with her life, and she can’t really say no to things she doesn’t want to do – so she always finds herself being pushed by life, rather than getting what she wants out of it. This makes her resentful of people who have managed to get what they want and who are just being themselves for the sake of it.

Strangely enough, I felt a deep affinity with Amina – even though I’m local where I live, I look like everyone else more or less and I come from the same background. But there was so much more to Amina’s character than her heritage that made me relate to her – so many struggles she faced that made her feel exactly how I used to feel when I was younger. It’s all described in a manner that I found very close to my own experiences. An image of the cover of The Royal Abduls on a flatlay image, with other books and candles, candies around it; photo by AvalinahsBooks

Some readers may not like Amina as much as I did, because she can’t always make up her mind, stalls instead of making decisions she should really be making, stays silent when she should really speak up – she is not one of the go-getters, and she doesn’t really know where or even who she wants to be. But that’s the whole point – struggling all your life to find the real you, and what YOU really want, unable to really fit into any slot – you end up being passive in everything, because what will it really change, anyway? This passivity boils over for Amina and it’s the whole arc of her character development – after all, it’s only so long you can keep sliding and trying to avoid breathing in and making life go on from the frozen point. I really loved how it was done.

Dilemma Of Immigrant Children – Can You Belong To Two Cultures At Once?

One of the main themes of the book seems to be the lostness of immigrant children and grandchildren – especially if their parents didn’t really instill a lot of their culture in their day to day lives. Who really are they? What is their identity? They’re obviously not white, but are they really, truly of the other identity? Do they belong with the people of whichever country their parents once left? It seems they don’t feel they belong with one or the other anymore.

This theme is mostly expressed through Amina’s nephew, Omar. He struggles to fit in, and instead of trying to do it, he chooses to rather fit “out”. Despite being second generation and mixed race, raised as any American kid, Omar longs to find an identity, so at first he starts to manufacture one for himself. He scrambles to find his connections to the country of his heritage, sometimes desperately. The child really wants to belong, and India now seems to him like the only place he could actually belong to.

If you can't really fit in, maybe the answer is to fit... out? This is one of the themes of The Royal Abduls: Click To Tweet

And at first, Amina thinks it’s harmful – after all, even she grew up without any of her culture around her even in her family of immigrants. So what’s the point of making it all up? But as time passes, she starts helping Omar discover himself, and his culture. And perhaps discovers a little bit of herself as well.

The Royal Abduls Tells The Story In Alternating Points Of View

The story is always being told through the third person, but the points of view change, and I liked that. By seeing things through the eyes of both Amina and Omar, we hear their different perspectives, and see how you can’t ever truly know what the other people are thinking because we humans mostly operate on assumption. We think we know, but we may be utterly wrong. In fact, to me it seemed that this was another smaller theme of the book, cause so many characters assume things, and then are either shown they assumed completely wrong, or it’s just us as the reader who learns this. 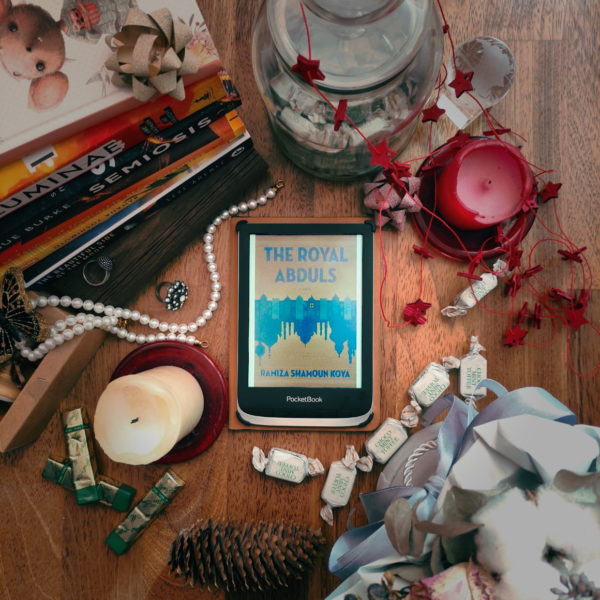 An image of the cover of The Royal Abduls on a flatlay image, with other books and knick-knacks around it; photo by AvalinahsBooks

Omar’s point of view is also good because we get to learn about living in a country where people keep “othering” you – from a child’s perspective. Omar doesn’t really understand whether he belongs or not, or where he belongs. He asks whether he’s an immigrant – despite him and his parents both being born in the US. He doesn’t understand why people keep asking where he’s from. All these things are unnatural and confusing for a child, and they should be – Omar’s perspective highlights this, because through the eyes of an adult, it all seems as just the way it is, sadly – but through the eyes of a child it takes on a new, stark quality of ‘this doesn’t and shouldn’t really make sense’.

The Royal Abduls was an incredible story, it was powerful, and more importantly – it was an ownvoices story of a non-practicing Muslim after the tragedy of 9/11. I’ve never really read anything quite like that – anything with so many themes, and so much said in just one book. I can truly recommend The Royal Abduls to just about anyone – it’s a story that will stay with you for a long time.

The Royal Abduls was an incredible #ownvoices story of a non-practicing Muslim after the tragedy of 9/11. The book encompasses so many themes, I must recommend it: Click To Tweet

What are some ownvoices books you’ve read lately?