When I saw the blurb of The Lost Shtetl, I was immediately drawn in. It sounded like an absurdly ridiculous, yet mesmerizing concept – a Jewish town in the Polish woods so remote it gets overlooked for more than a hundred years, so much so that it is even missed by the Holocaust. The people living there go around their daily lives happily and quite boringly until one day something happens that calls for the summoning of the gentile authorities, and one of their men is sent out to look for them. What he finds… Is the 21st century.

WILD, right? I immediately craved reading it!! How is this going to be put together? What’s going to happen? What a wild idea altogether!!! Imagine a man in 19th century garb and a mule with bags walking into a present day city! Wow!

And I was so lucky to be granted a review copy. I started reading immediately and I didn’t want to put down The Lost Shtetl even for a minute. It drew me in so much I kept glancing at the clock and wondering whether I’d have to stay up that night.

And I definitely did. 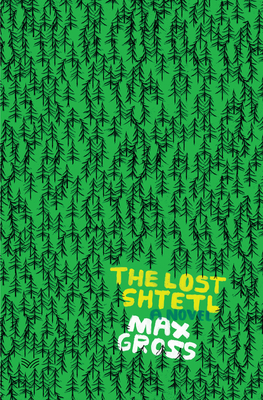 The Lost Shtetl Is Very Readable And Easy To Follow

The writing of this book is simple and very nice to read. The narrator seems like a comfortable personality, inserting mannerisms here and there so you remember that he actually exists as a person and this isn’t just a third person perspective. It reads really nicely and the pace is just right.

There are many side characters and they’re all described in detail. They all come alive on the page, and before anything really happens, you already know most of the more important characters living in the town. Knowing them like that makes you feel like you now know the whole town – it has a certain vibe. And yet, the descriptions are not lengthy or boring – they’re very interesting because they’re done through events and stories. I really liked the way it was done.

But apart from these passing characters, there are a few who will come through in more detail than the others. I got really attached to these characters. We follow their fates through the entire book, and their stories are not simple at all. The contrast of such a simple, seemingly boring town – and yet, such complicated drama that outsiders can’t even work out, was what gave the story its salt, in my opinion.

Imagine Stepping From The 19th Century Straight Into The 21st

The first part of the book is devoted mostly to the collision of the new world and the old one. This is done in part through the whole town being plunged into the present day reality, as well as through the experiences of the first few people who leave the town. For me, the experiences of the first stragglers were what made the biggest impression.

So imagine being the young man who is the first one to see the 21st century – it’s like he’s shoved in a time machine! It was something unbelievable reading about him experiencing the way the times have changed.

Seeing him discover cars that move themselves, or lights, or all sorts of strange mechanisms he’d never seen before. What must it feel like to essentially land on another planet? Travel by a time machine? I loved reading this part. It made me wonder and wonder. It also made me realize how many things we take for granted – like the fact that we can predict the next day’s weather fairly accurately.

But the book isn’t solely about that – that’s only the fun part. There are a lot more heavy things that go along with it.

Imagine stepping from the 19th century straight into the 21st – that's what the characters of The Lost Shtetl do. I didn't want to put it down even for a minute: Click To Tweet

The Novel Goes Deep About Hatred Of Otherness

This novel isn’t directly about, say, the Holocaust or antisemitism, but it is woven into the background tightly. It’s very hard for me to sum it up cause obviously I don’t have a background on these topics, and also because there were many threads regarding them in the story – but at least one that I got from it was that it seems if you’re Jewish, you can’t really run away from antisemitism – not even if current societies claim they’re “not doing that anymore”. And that no matter how compelling your argument will be, the world at large can just turn away and say “no, you are wrong”, and that’s that – nobody cares.

The Lost Shtetl is about many things, one among them is how if you're Jewish, there is no way you can run away from antisemitism – even if the world claims it's changed. Click To Tweet

It was a personal shock for me to read about how Yankel was being cruelly treated because he was Jewish (in particular, dressed in the Orthodox way.) This wasn’t the only instance in the book where this happens – the whole book is full of small, seemingly insignificant instances which, if you look at them separately, seem a one-time thing and possibly unrelated, but if you look at it from the characters’ perspective, you just want to scream about how unfair it is, after you realize that this happens again, and again, and again!

It’s shameful to think this still happens now, in our age. You’d think Poland of all places wouldn’t have this problem – the country that suffered perhaps the most during the Holocaust. The older citizens of rural Poland are depicted as very strongly anti-Semitic – and that made me very sad. I want to hope it isn’t true. But I’m afraid there is probably a lot of truth to this depiction.

Anyway, but there’s a lot to unpack there and I can’t even get my thoughts in a line – there’s SO MUCH to think about, when it comes to The Lost Shtetl. That’s for the reader, each reader, to unpack on their own, so I will move on now. I’ll just say that it gave me all sorts of emotions. I am still brimming with them after having finished reading it.

It’s So Detailed On Jewish Traditions And Way Of Life

I can say I learned a lot about Jewish traditions from this book, and it was very interesting. For example, I never knew that Jewish Orthodox women wore wigs to hide their real hair. Or about the divorce practices. It was all very interesting to read about.

I also learned that nearly all the slang words I’ve always taken for granted have apparently come from Yiddish. I only mean where I live – in Lithuania, and since this book is about Jews in Poland, I can see how the words would have traveled from there and reached us (Lithuania and Poland has A LOT of common history.) For some of those slang words, I’ve always thought they were Polish! That’s honestly so cool, and to think I never knew it. (I suppose this goes for a lot of slang we use in English as well, cause Yiddish certainly left it’s mark on the American colloquial English.)

The Emotional Side Of The Lost Shtetl

I’ve already mentioned, but I’ll say it again. After having finished the book, I wasn’t sure if I’d be able to sleep – I was just too angry still at everything that went down, on behalf of the characters. So I have to warn you, it’s not an easy read. The first half of the book is quite fun and easy-going – but then you get attached to the characters and their fates, and things go south… And, well, you’re just upset.

You’re going to probably be upset at this book. But that doesn’t mean you shouldn’t read it. All the more you should – to know about these situations, that they happen and that they suck. Just be prepared for the feels.

Be prepared for the #feels, when reading The Lost Shtetl – you will seethe on behalf of the characters, and you will grieve for them – but it will carry a lot of meaning too. Click To Tweet

Have You Ever Wondered About The Societal Aspect Of Isolation?

Another thing is how some of the locals face the historical disasters emotionally, when told about them – because their town luckily didn’t get hit by them. The few touchpoints the town had with WWII survivors were touching to the core and I loved how it was all written (I wouldn’t want to say more for fear of spoilers.)

What happens to a society when it's been accidentally forgotten and isolated for 100 years? Explore that in The Lost Shtetl: Click To Tweet

There is just too much to sum up when talking about this book – it covers a lot. From the traditions and simple life the isolated villagers were living, to the way modern life affects them – economically, emotionally, culturally and otherwise – it was all very interesting. But apart from that, there’s the emotional and moral side of the pitfalls of history, on cultures intersecting, or rather, colliding – and on whole societies dealing with prejudice, war and calamity.

Because of all this, I thought The Lost Shtetl was a spectacular book. I can certainly recommend it, and it will remain one of the most unique books I’ve read this year. Definitely worth a read!

The Lost Shtetl is a spectacular and unique book that incorporates the otherworldy collision of two generations an age apart, as well as the daily struggle of being Jewish in non-Jewish societies: Click To Tweet

Have you read any books with a premise like this, where the characters jump in time without actually jumping in time?