Lights Out in Lincolnwood was one of the more original stories I read this year, and maybe not even just this year. I’m not quite sure I’ve read anything like it before! And I’m very glad I chanced upon this book, because not only was it snarky and kind of funny, but it was also serious in the way of, “but what if?”

I love premises that make you think and ones that aren’t strictly traditional, and that’s precisely what Lights Out in Lincolnwood is like. The situation the main characters, the Altman family, go through, is certainly not a story you hear told a lot. Not in movies, not in books, and I LOVE stories like that. 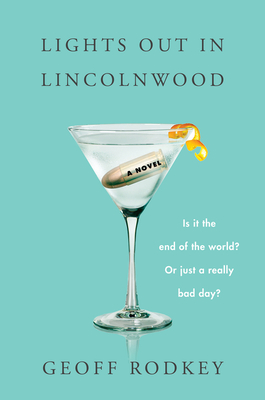 Check out on Goodreads
★★★★☆ 4 stars
How I read this:
free ebook copy through NetGalley

What happens is that despite the day starting as usual as the Altmans go about it, suddenly all electronics stop working. Cars and trains stop, phones won’t turn on, planes… Fall from the sky. At first people react as if it’s a nuisance – at least, those who haven’t seen the planes fall – they think it’s another act of terrorism. The family members, upon starting their usual morning with bickering and stress, break up and go their own separate ways, only to get stranded – each in a situation of their own. Lights Out in Lincolnwood is about a family figuring out their current situation just as much as them figuring out their entire, messed up lives.

And I have to say, the Altmans are pretty messed up. They’re a disaster waiting to happen, but because of the distorting lens of daily life and routine problems, nobody has noticed that the family is on the brink of certain desctruction. Every single one of the Altmans is focused solely and entirely on himself or herself, without a single thought of what might be going on in the universe of the person next to them. It’s no wonder that they all fumble about the newly developed situation with completely disastrous circumstances. Watching the Altmans navigate a possible apocalypse is a little bit like watching a bunch of cows trying to stand up on the surface of a frozen lake. It’s sad, but also just that little bit funny, and so you just can’t look away.

We start following the Altmans as they are all in a transitory state – the wife in between being a full time mother and going back to full time work (which is not going well for her, not to mention her secret drinking problem), the daughter in between school and college (and her disastrous relationship with her mother), the son in the first throes of puberty (and the social terrors it brings), and the dad – in between of handling his career change and his crazy family and… Not handling it anymore. It’s interesting, because as you start, you already know what’s going to happen – the Altmans’ lives are not going to continue as they were, but you keep wondering. Where would they have been, if things hadn’t happened the way they did? Would they have figured themselves out? Or not?

It’s a question that’s eerily relatable to our lives right now – where would we be now, if the pandemic hadn’t hit back when it did? Some of you may have new jobs, some would be married (as opposed to in engagement limbo, unable to even book a wedding due to quarantine). Some would be living in another country. Some would have embarked on a career change or found the love of their lives in a busy bar on some Saturday night. But now we’ll never know that, cause that’s not how it went. Same with the Altmans.

But aside from that, the book also explores the idea of what if? What if something really did happen, and our world was never the same anymore? How would you cope? Would you have enough supplies, or the mettle? This is not a zombie apocalypse book, but it is a realistic exploration of the idea, and in that sense, it reminded me of Station Eleven (although that story is set much farther down the road – Lights Out in Lincolnwood only happens like three-four days into the trouble.) The story flings a family of privileged entitled people into some real trouble and asks them, how would they cope? You see them flail, but you start wondering, how would YOU cope, if your entire world come crashing down? Would you believe it’s temporary? Or would you enter the new dark tomorrow with a fury? 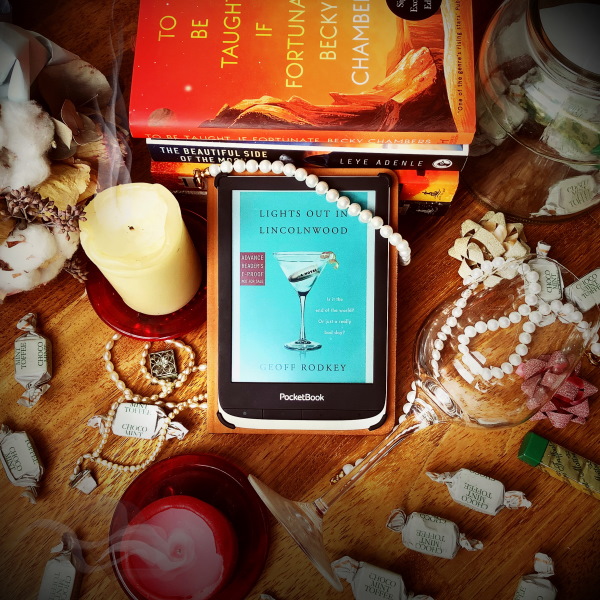 An image of the cover of Lights Out in Lincolnwood on a PocketBook Color e-reader, there is candy around it, some candles and an empty wine glass, some pearly necklaces; The cover of Lights Out in Lincolnwood is bright aquamarine and has a glass of martini with a lemon rind on it, and there is a bullet sinking in the drink. Photo by AvalinahsBooks.

I also loved how their problems were presented both through a close up and far away lens. From further away, all the problems each family member is having seem manufactured, meaningless and totally entitled first world problems – and yet… Once they are all shown in more detail, they become world shattering, really actually quite painful things that impact the people very much. To the point where when you look at it from their perspective, you can’t really blame them for acting shitty about things, because they’re really bothered by something. It’s interesting how that is – and I guess a lot of people’s problems only seem big when you’re the one having them, but not when you’re looking at it from the side.

I felt like the family was a sort of depiction of our current society, and it’s seriously ridiculous. It’s like a caricature of us, and our lopsided priorities. There are planes falling out of the sky, the water’s being rationed and the world seems to have ground to a halt – and yet, the Altmans here are worrying about their next nicotine or alcohol hit (or the absence thereof), their crushes or even their lost Airpods. It’s really quite striking how it all looks in light of what’s going on, but what none of the family members seem to be able to realize.

As for the story… The book gets wild, and then gets wilder. I didn’t expect the ending for sure, and it was one hell of a ride. The family’s definitely not the kind of protagonists you specifically want to side with, but they are interesting characters, and by messing up the way they do, they open up the way for more interesting plot points. There was growth in their stories, and they kind of makes you feel like you’ve got your shit together, when you’re reading about people like that.

Surviving in a possible apocalypse is only half the picture – dealing with your family and neighbours is the other half. Lights Out in Lincolnwood is relatable in the uncertain world of today: Click To Tweet

Lights Out in Lincolnwood was certainly one of the more original reads of mine this year! I am definitely going to remember it for a long time. Despite the dark scenario, the book is still upbeat and quite snarky, so it makes the reading fun. It also makes you think, what if? Would you be ready, if this happened? And what are you taking for granted in your life?