So last week, in my review of Beside The Music, I promised you an interview with the author, BJ Knapp. Happy to say that I’ve got the interview questions right here and I’m going to share them with you in just a few seconds! But first of all, let’s meet our lovely interviewee. 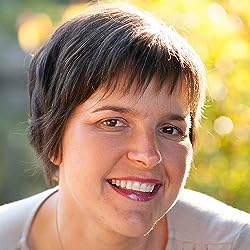 Although we already know that BJ Knapp a writer, there’s more to the story. I have to say, not everyone writes a book with a premise such as rockstars living in your home. So it doesn’t surprise me that BJ is a former college radio station DJ. How cool is that? As for books, Beside The Music is just the tip of the iceberg. Day to day, BJ writes corporate pieces, but her prouder achievements are her original angry chick rock songs, usually about bad boyfriends, accompanied by her out of tune guitar. BJ resides in Rhode Island with her husband and two dogs. She is an avid sailor and scuba diver, and also enjoys pretty much any outdoor activity such as hiking and geocaching as well.

So now I think we’re finally ready to face the music.

So you wrote a book about living with rock stars. Considering all the detail in the book, I have a feeling you’re no stranger to the world of music either. Do you have any background in performing, song writing or just general rock’n’roll fun?

BJ: I love 80’s rock, and I have read every single 80’s rock star I can get my hands on.  “I Am Ozzy” by Ozzy Osbourne was by far the most fascinating one I’ve read.  I literally read it in just about one day.  I do have a background in performing, too.  I used to play guitar and write my own songs.  I played them at the open mic nights in Providence, RI and Boston, MA.  In fact, the story of how Brenda and Tim met in Beside the Music really is the story of how my husband and I met. I became friends with him and the guys in his band and eventually I opened up for them at their shows.  The rest was just my imagination of what I think living with entitled rock stars would look like.

Which brings me to the next question! Reading the book made me feel like you really knew their quirks. Some of those things don’t sound made up at all, you know what I mean? Do you really mean to say that you never experienced anything like… a band in your house?

BJ: I get asked this all the time, and the answer is no. I like to say that Beside the Music is based on actual events that never happened. What’s funny about this question is that my friends ask me, and I usually say “You’ve been to my house, you would have noticed if Motley Crue—or some other band—was living there.” So, while the story doesn’t sound made up, it totally is made up.

Well, I know I’m amused by the fact that even your friends ask you that. Let me just say I’ll believe what I believe! (teehee) But onto further questions. Beside The Music was fun, strong and honest. I loved the voice! How much of your true self is in that voice? I guess I’m asking if Brenda is very different from you, or maybe you feel she’s a kindred spirit?

BJ: First, thank you for the compliment. I wanted it to sound like this story is something that could actually happen. I wanted Brenda to be both likeable and unlikeable at the same time, like real people are. I wanted her to get so bogged down that she didn’t feel like she could see her way out, and then have the answer present itself to her, like it often does in real life.
My friends who have read the book all say that they heard my voice when they read it—to the point where they think I should be the narrator for the audio book. And I am not against that idea at all. Brenda does have some of my characteristics. I don’t like wine, neither does Brenda. Brenda is sarcastic, I am very sarcastic too. Brenda gets distracted at work when her personal life goes haywire, and so do I. (I think most people would, though, if they went through what she did.) Though my personal life never went quite as haywire as Brenda’s, I do get very distracted at work if, say, my husband and I are disagreeing about something.

Doesn’t everyone! Brenda was indeed very lifelike, so I’m glad to have my suspicions confirmed. But tell me, how did the idea for writing this book come to you? Was it one of those lightning bolt kind of inspirations, or did it take you a while? Maybe there’s a story attached to it?

BJ: I often google the names of old 80’s rock stars that I haven’t heard of in a while. You know, the ones who didn’t have the staying power. I want to know what they are doing now. Are they still out there playing, or did they close the door on that part of their life and move on to something else?

Then I thought about the inevitable meeting these musicians must have had with their management. They were called into a conference room where they showed up in their leather and eyeliner. They got told that the gobs of money they made is now all gone. Then they freak out. Then they have to figure out what to do next. Do they try to make a go of it again? Or do they leave the meeting, wash off the eyeliner, and get an office job in a cubicle?

I originally had this scene in Beside the Music, because at first I was trying for a multi perspective between the band and Brenda’s point of view. But it was too much to go back and forth—you really have to commit to it and I didn’t want to because it would have been a very long book. I wanted Hydra, my band in Beside the Music, to shoot for the comeback. So they first had to get some publicity and meet their American fans, and then the story snowballed into Keith meeting Brenda, Keith starting to write a song at her house, and then the band moving in.

I’ve totally had that when I was writing a story once, a long long time ago (in a galaxy far far away…) So I totally get that! That’s the best way to write a story, I’d say. In a way, it unveils itself to you as well. Which brings me to the next part – the characters. Personally, how did you feel about all the characters in the book? Who was the most fun to write? Who would you love to write about again?

BJ: I had a manuscript coach tell me to dial back Portia—the snooty meddling mother in law—and I said absolutely not. I had a blast writing Portia. I wanted her to be the paper boy from that John Cusack movie “Better Off Dead.” The paper boy always seemed to show up at the most inopportune moments to ask for his two dollars. “I want my two dollars!” he’d shout from his bicycle that had been fitted out with skis, as he chased Cusack down the mountain at the skiing competition.  I wanted Portia to be that. I wanted Portia to storm in, irritate Brenda, and then glide on out on her high heels on cobblestones. Portia is so over the top that Brenda’s reaction to her is comical—even if she makes Brenda feel bad about herself. But I don’t think I could ever write a book that’s just about Portia’s rise to ultimate snobbiness because that wouldn’t be as funny. She’s an insane snob now, and how she got there isn’t as interesting. As far as I can tell, she’s always been that way.

I am, however, interested in Keith’s rise to fame. (Note: Keith is the rockstar character.) He has become an entitled jerk of a rock star, and his path from normal guy to rock god would be an interesting one to write. I am also interested in Erik the band manager. How did he become this force that only exists to make the band happy? It’s to the point where what he’s doing only serves to inflate the band members’ ego so that they continue to produce music (and ultimately money). How did Erik become that guy?

Yes, I think I would like to hear more about Keith or Erik, or maybe even Toni, the band’s publicist! But leaving future books aside, have you written any other ones? What are your writing plans in the future?

Great news! I know I’ll be looking forward to reading that. As for my last question, of course, what is your favorite band?

BJ: My favorite band of all time is Rush. For three guys, they have so much going on in their songs and on stage. They are fastidiously incredible musicians that my mouth still hangs open after listening to their music. I tend to focus on different components of bands rather than the whole. For example Chevelle and The Dangerous Summer have incredible drummers. When I listen to their music I zero in on the drums. If I am looking for something gentler to listen to, I love Carbon Leaf and Willy Porter.

Thanks BJ! For now we’ll be saying bye, but if there’s any news on her new book, I’ll let you all know. What about you though? Have you ever imagined yourself living with rockstars? And what are YOUR favorite bands?