Today’s my stop for the blog tour of Instructions for Dancing by Nicola Yoon with The Write Reads blog tours, and what a story it was! It’s got everything – a sweet love story, grief and betrayal, yet healing as well. It’s a story about how life can’t really ever be a fairytale, but it’s what we experience along the way what makes it real – what makes it worth it. Loving someone enriches you, and that’s what Instructions for Dancing was all about for me. The real question is – will it heal your heart or break it? It kind of did both for me! 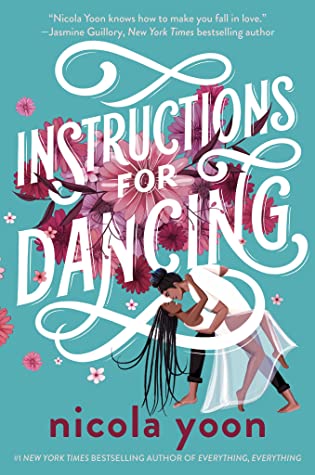 Check out on Goodreads
★★★★☆ 4 stars
How I read this:
free review copy for blog tour

Instructions for Dancing had such an interesting premise. Evie doesn’t believe in love anymore, ever since her Dad betrayed her Mom, and in her eyes – her and her sister too. She’s as bitter as she can be, and yet – she stumbles upon a “gift” – poor Evie now has an ability she’s never asked for. Imagine just starting to see everyone’s romantic history, past and future, one day – and it happens every time they kiss. Is it something you’d feel is romantic? Or would you freak out, because it’s unnatural and maybe you’re going nuts? (You can probably see where that took Evie.) Certainly a great plot point for a book though! I couldn’t resist.

Evie was an avid romance reader – but that was before her Dad left her Mom, and before she found out that he did it because he found another woman on the side. That truly did a number on Evie – she can’t trust anymore, and she doesn’t believe in love anymore. So much so that she’s dropping off her favorite and well-loved romance novels anywhere she can find a place for them.

And that’s precisely where she meets a mysterious woman who gives her a booklet with, literally, instructions for dancing. After which she starts seeing these weird visions… And wants to get rid of them as soon as possible. Which leads her to the dance studio the booklet belongs to. And so, Evie takes a dance class. 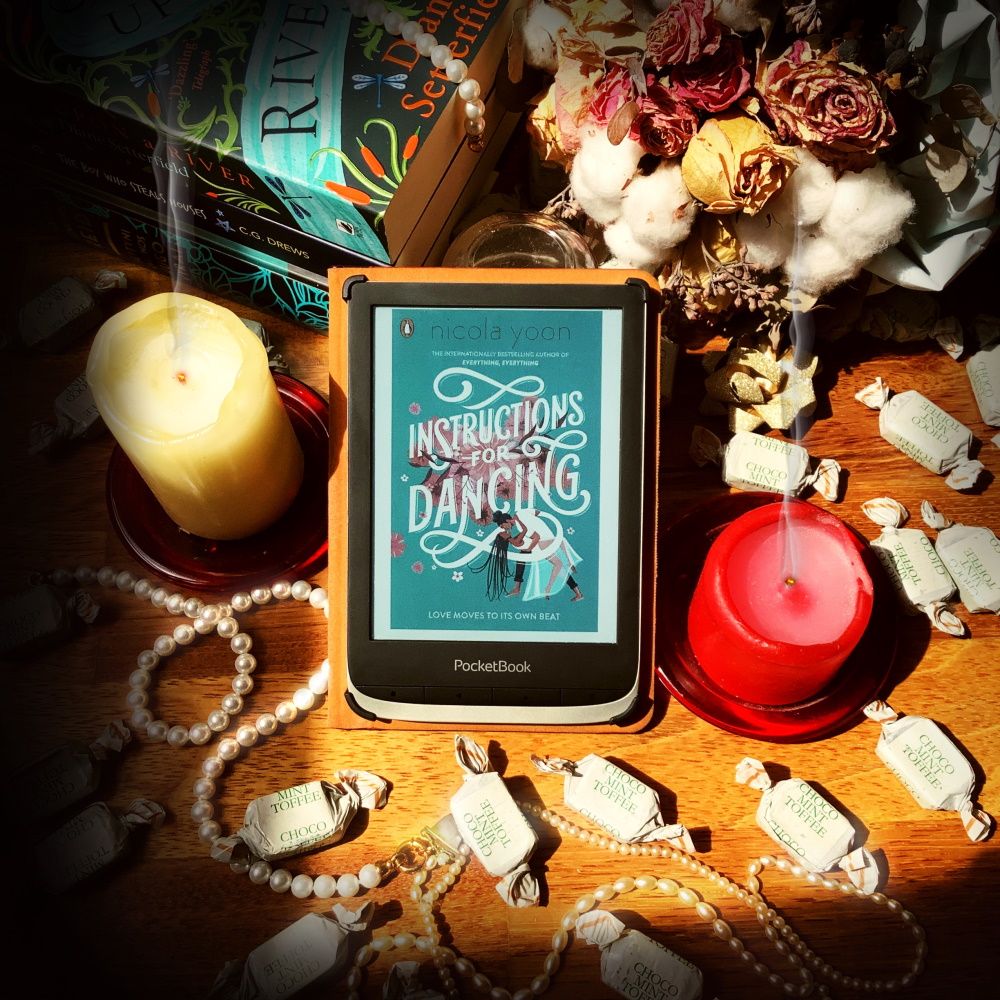 An image of the cover of Instructions for Dancing by Nicola Yoon on the screen of a PocketBook Color, it’s a bookstagram setup with candy and necklaces and other books around it; Photo by AvalinahsBooks

I have to say, it was fun to read about dance classes. I’ve taken many, and I’ve danced most of the dances that were mentioned in this book. It was nostalgic to read about this! It’s all described very genuinely. (Apart from maybe the fact where complete beginners are able to dance well enough to earn money after just a few classes, which I’ve never really seen happen – after so few classes people usually struggle to dance long enough and keep their moves varied enough for their partner, much less any spectators, because they know so few moves. But hey, it’s a fictional story. You have to make cuts in order to let the story flow – and the author admitted she took liberties with the dancing to facilitate the story.)

Another thing I liked is that since Evie is an avid romance reader, she knows all the typical romance plots and tropes, and often references them in the story. So we get this narrative that sort of breaks the fourth wall – it’s almost as if Evie knows she is in a romance book, and will inevitably fall in love with the love interest, and is constantly commenting on it, but at the same time, she’s living it and so she knows it’s the real thing for her. It’s a really unique format and I haven’t really read anything like this before. It was quite a cool way to tell a story! 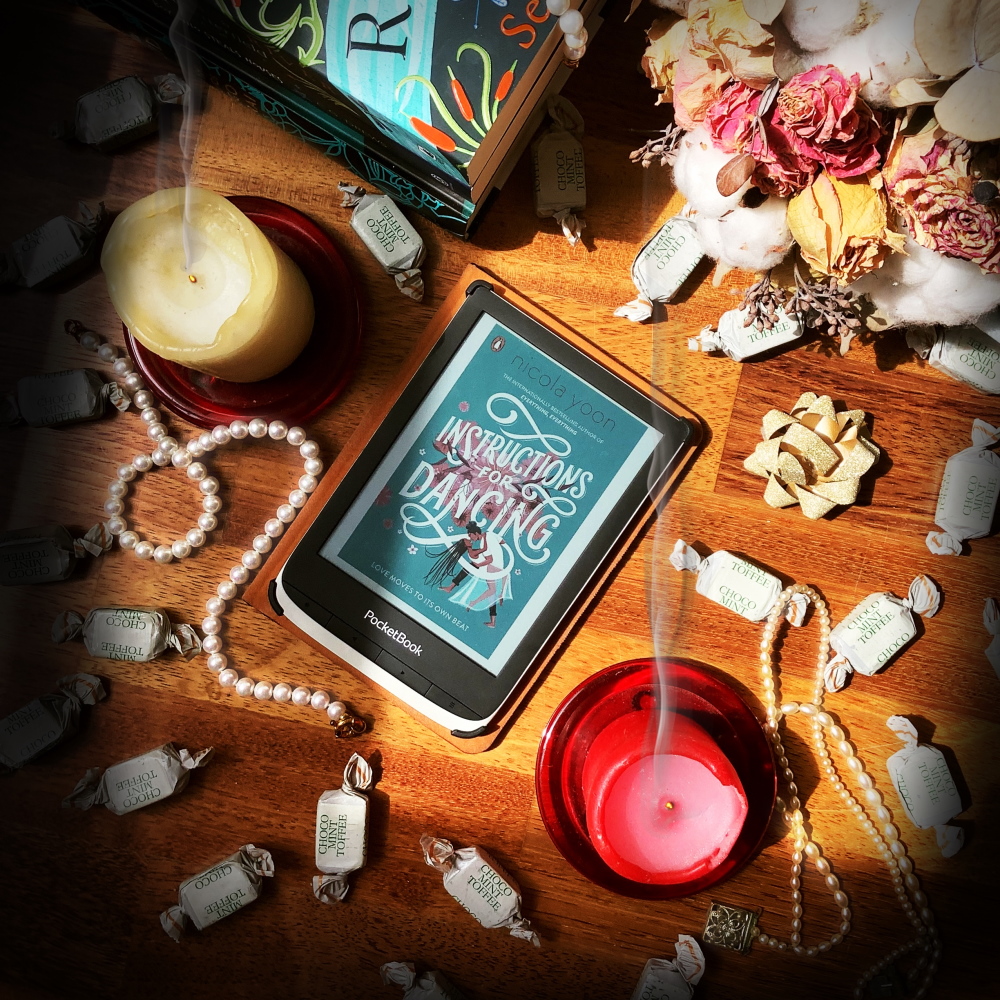 An image of the cover of Instructions for Dancing by Nicola Yoon on the screen of a PocketBook Color, candles and candy is around it; Photo by AvalinahsBooks

This book was mostly chill and lovely, despite dealing with some really tough topics and this is a huge spoiler BUT also a huge trigger, so proceed at your own peril and click the blur if you want to find out. That’s the least spoilery way I can say it.

Despite that, it was beautiful. It’s about letting go, living in the now and realizing that it’s not Life is messy and hard and unpredictable, and the only thing we can hope to keep are our experiences that we had going through things, and that’s why we should treasure them.

Instructions for Dancing may heal your heart, or break your heart – or actually both, but either way you won't forget the story: Click To Tweet

Instructions for Dancing may heal your heart, or break your heart – or actually both, but either way you won’t forget the story. It’s a very gentle YA with an incredible book boyfriend and a deep message. 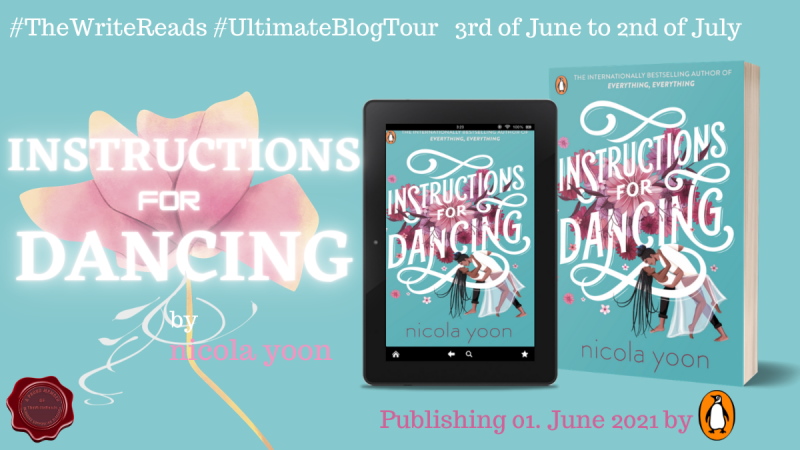