And, Taylor Jenkins Reid does it again – Malibu Rising is an unbelievable, steady burn novel that doesn’t let you down a for a single moment. Strong characters, unique destinies and a sufficiently tangled, yet chill plot that will leave you hoping she’ll produce one more of these gems sometime soon. 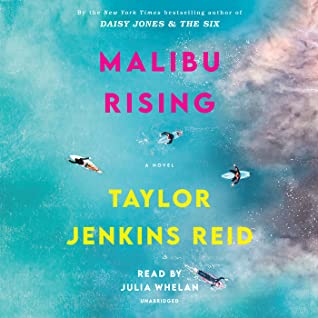 Check out on Goodreads
★★★★★ 5 stars
How I read this:
free audiobook copy through Libro.fm

So far, I’ve only read Daisy Jones & the Six, but I’m glad I have The Seven Husbands of Evelyn Hugo, because I’m getting more and more excited to read it now (especially after my reading buddy told me that some of those people in Malibu Rising were cameos from that one!) Despite the hype, Malibu Rising did not disappoint at all – it’s somehow strangely, both a very similar book to Daisy Jones & the Six, and at the same time, completely different. It’s got a similar tone and vibe, and it will make you feel just as attached to the characters as that one did. Also, while there is an abundance of characters, you still get to know them and their struggles just as well as you did in Daisy Jones & the Six.

And yet, Malibu Rising is also so very different from Daisy Jones & the Six. It’s about families, but also sort of… From the other side of the view. In Daisy Jones & the Six, we saw everything through the eyes of the man But in Malibu Rising, it’s all seen through the eyes of the children – the ones left behind by the ‘big and famous’ man. It’s clear that Taylor Jenkins Reid still wants to explore the same kind of human drama, even fame and luxury included – and yet, she wants to show us the other side of it. And she does it brilliantly. An image of the cover of the Libro.fm version of the audiobook of Malibu Rising by Taylor Jenkins Reid, opened in the Libro.fm app; books and random items strewn it all; photo by AvalinahsBooks

The four children, the main characters of this story, are left behind by their very famous and rich, yet totally deadbeat dad. It’s not a clean story at all, and it’s definitely worth to read just for that bit, because it’s a human drama described very well and very sensitively. As someone who had an absent dad myself, I’m always very sensitive to these types of stories – and yet, this one did not disappoint. It even fueled my interest in the story further – Taylor Jenkins Reid really does now how to egg you on, how to make you burn in anger for the characters and how unfairly they’ve been treated.

And she delivers – I was very satisfied with the entire story, both the lead-up and the resolution. The growth of the characters was great. The end result to all involved is just the right kind of ending you’d want. This story really satisfies. And at the same time – it’s just complex enough to make you think hard about life choices – whether yours or someone else’s. Taylor Jenkins Reid is great at weaving family drama. An image of a mobile phone which is displaying the Libro.fm app with the Malibu Rising book view paused during play, there are other decorative items like hair pins and bows around it; photo by AvalinahsBooks

Taylor Jenkins Reid has the uncanny ability to tell stories outside of normal timeflow – in Malibu Rising, it’s like she matches the pace of the stories of the past and the present so perfectly. Everything is revealed at just the right time. So you won’t want to put the book down!

Taylor Jenkins Reid does it again – Malibu Rising is an unbelievable, steady burn novel that doesn't let you down a for a single moment. Click To Tweet

To sum it up, I’d say Malibu Rising is an experience – you delve into it completely, and when you surface, it’s like a whole other world. There are quite a lot of characters and they might take a while for you to get used to, but it’s well worth it and you’ll fall head over heels with all of them, or at least most of them. This story is one of a kind and definitely worth a read.

I thank the publisher and Libro.fm for giving me a free copy of the audiobook in exchange to my honest review. This has not affected my opinion.