Wow… What a book. Giving the Devil His Due is haunting, morbidly interesting, graphic, important, fascinating. It hooks you like a disaster you can’t look away from – it’s scary, but also you just kind of need to know. I can’t quite describe it, but it’s just my lack of words. Because it left me speechless – and I mean that in the best way possible. 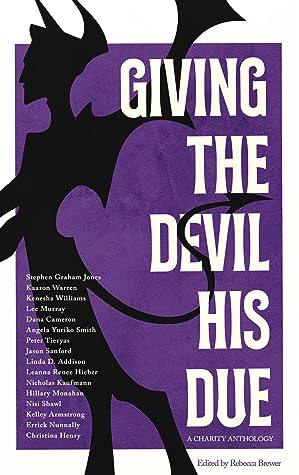 Check out on Goodreads
★★★★★ 5 stars
How I read this:
free ebook copy from publicist

The whole book is dedicated to fighting violence against women, and talking about it, spreading the awareness. But if you think this book is going to be soft, think again.

Yes, the women come out on top. Yes, the perpetrators are punished – unlike in real life, in many such cases. But, BUT. Expect it to also be heavily triggering, because before we get to learn of their just desserts, these guys HURT women. And this is the bit where I said it’s like a disaster you can’t look away from.

Some of the women in the stories are trapped in a life they never asked for, some experience violence at home. Some are trying to make it in academia. All struggle.

But at the end of the tunnel, there is light. Or at least, if not light – there’s always revenge. ALWAYS.

If you think you can stomach it and think it won’t trigger you, it’s definitely 100% worth the read and it’s a stunning book. 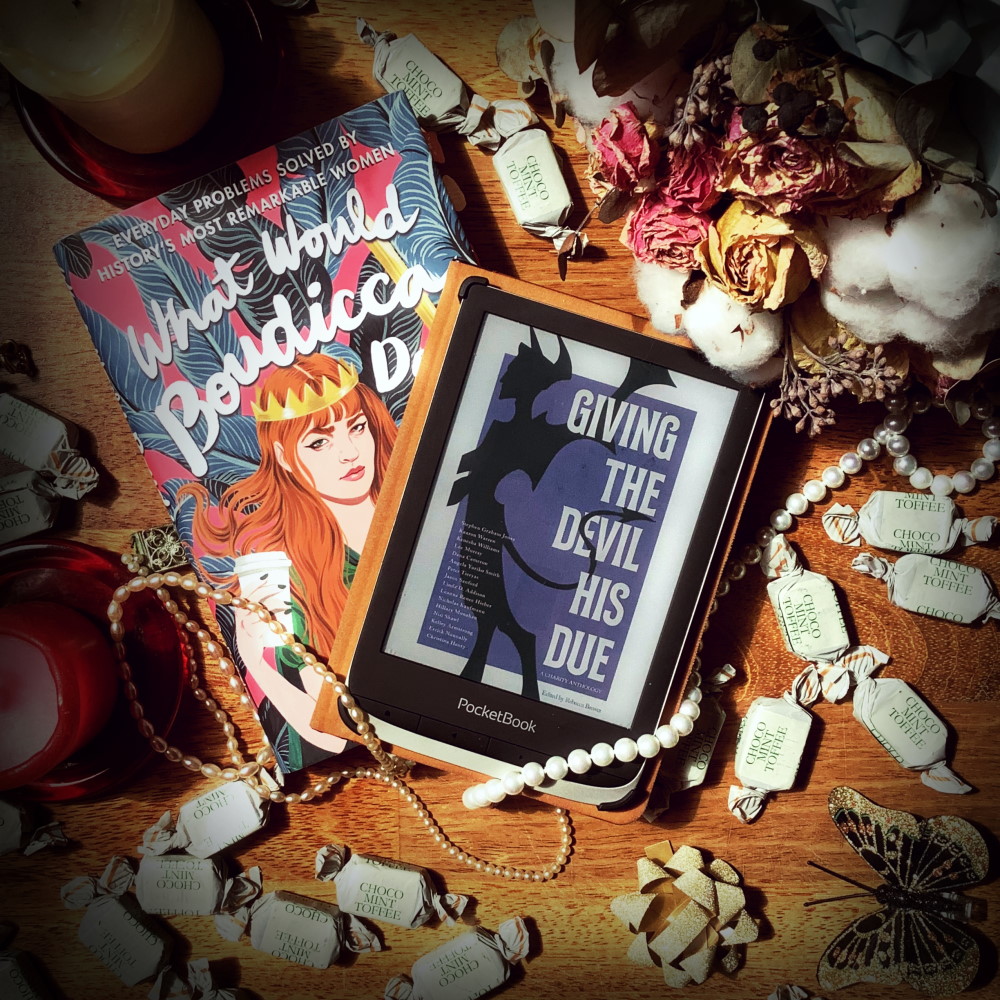 An image of the cover of Giving the Devil His Due on a PocketBook Color e-reader, there are necklaces and candies next to it, and there is a copy of What Would Boudicca Do? underneath the ebook reader; Photo by AvalinahsBooks

My only disclaimer is that, I don’t morally agree with some of the things in the stories – violence against violence and revenge isn’t the best answer, at least, not always. Revenge destroys the person inside. Having been in one of these situations myself, I found that wanting revenge, even if you could have it, will never give you peace. You can only get peace for yourself once you’ve forgiven, because otherwise, you’ll never be able to put it past you.

But I think, that’s probably part of the point to these stories – what if we could turn these situations around, and have the victims come out on top and get rewarded for their revenge, as opposed to how the perpetrators get rewarded for being horrible a lot of the time? It’s just… It makes you think. You don’t have to agree with the notion of revenge or what happens, what the characters choose. But it will make you think. And that’s a good story that does that.

I also can’t deny that it IS satisfying to read some of the stories. Even though I wouldn’t want the people who harmed me to be punished in such awful ways in real life, reading about it… I don’t know. It’s a cleansing experience, in a really morbid way. It’s SO hard to explain. The book was very unique to me specifically because of this.

I grew up in a home with violence (thankfully, my mother escaped – early on). I’ve also had other related experiences when I was young. Things I’ve dealt with for decades afterwards. So this wasn’t an easy read for me. But at the same time, I felt compelled to come back to it. It was like a glimpse into some parallel universe – one where karma is instant, instead of “somewhere out there”. It was an odd feeling. It certainly made me think a lot. This book was truly special.

Frankly? I don’t even know where to begin. The book deals with a lot of violence, mostly aimed at women, but not exclusively – because the women do get their revenge, and sometimes it’s gruesome. There is mutilation, murder, rape, there is a lot of awful stuff going on. While it gives the victims power, it’s still chock-full of triggers. The book is truly amazing, but if you’re in a dark place right now – maybe you shouldn’t pick it up, at least for the time being.

Giving the Devil His Due is a very special anthology – and not only because it’s meant for charity and ending violence against women. It’s a collection of stories where the victims are given power against their aggressors, and it shows how violence begets violence – how easily the victim can also become an aggressor. It truly shows the dark side of humanity, but it also sheds light on how complicated acts of cruelty and their effects can be. As you read, it makes you wonder at how thin the line between what’s right and what’s wrong is. This book was brilliant, but it should certainly come with a disclaimer that you will keep thinking about it long after you’re done reading.

Giving the Devil His Due by @PixelProject is haunting, morbidly interesting, graphic, important, fascinating. You will never forget these stories of empowering abuse victims: Click To Tweet