I absolutely loved The Dreamweavers. A quick and satisfying middle-grade fantasy read that is based on Chinese folk tales, great for the child and adult alike. What I particularly enjoyed was that the author entwined her own fantasy with tales told her by her grandparents, as the author was born in China herself. Any fantasy tale that’s steeped in the author’s own culture is usually well worth the read! 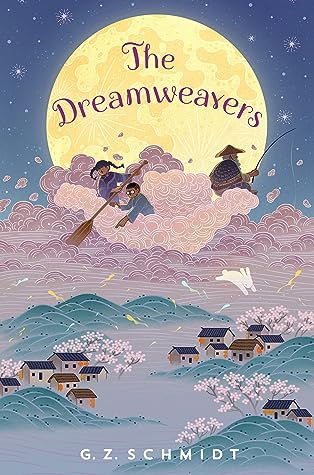 Check out on Goodreads
★★★★✬ 4.5 stars
How I read this:
free ebook copy from Edelweiss

The Dreamweavers has a gorgeous cover, and it’s representative of the story! The story is truly fantastic and magical (and you will see the characters do whay they’re doing on the cover!)

Mei and Yun’s family all have the ability to see odd wisps of color floating around objects, people, places. But the twins Mei and Yun have never paid much attention to this, as it was just natural to them – up to the moment when really weird stuff started happening in their village, which led to their grandfather being taken away to the Imperial prison to be judged, despite being completely innocent.

The twins’ parents have been lost for a couple of years now, and with the grandfather, their only family, now gone, the kids have to decide what to do. It’s time to learn more about the mysterious City of Ashes, and why there’s been a black cloud of ill will coming from the City and looming over their home.

So Mei and Yun have to make a daring journey to the City of Ashes – the city where their parents were lost, the city which is allegedly cursed. Will anyone help them? And how will they save their grandfather?

An image of the cover of Dreamweavers on a PocketBook Color e-reader, there are other books on the right of it, and a candle and some necklaces and candies around it; Photo by AvalinahsBooks

I loved how imaginative this story was. The children have to travel to a scary cursed city, as well as the Imperial palace itself. They have to do all sorts of cunning tasks, and of course – make friends with kids and adults alike. There is a fair bit of dream magic involved, but what I liked the most was that there is a definite moral thread throughout the story – there is character growth, and the children impart some very wise insights on some of the characters.

The Dreamweavers was a great fantasy story. Not only is it set in a genuine setting and steeped in folk tales, but it’s also got some very wise moral lessons for the reader. There is a lot of historical detail that the author explains at the end, and I thought they greatly enriched the story. I loved the characters and the legend that the book was centered around. Definitely worth the read!

The Dreamweavers is a quick and satisfying middle-grade fantasy that is based on Chinese folk tales, great for the child and adult alike. Click To Tweet