I was incredibly excited when I was approved for a review copy of The Freeze-Frame Revolution – and rightly so! It turned out to be a remarkably refreshing scifi that is both new, yet retains the best parts of hard classical scifi. I absolutely loved it and now can’t wait to read more by Peter Watts! 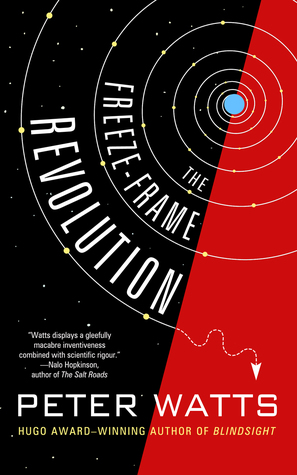 I was incredibly intrigued about this story, when I read the blurb – because it had the line “How do you stage a mutiny when you’re only awake one day in a million?” – now tell me, doesn’t that sound flat out amazing? I was very curious about how this will unfold. Turns out, the characters live on a space ship that carves out wormholes throughout space and time. Their journey is pretty amazing, and yet, they are figuring out that it might be coming to an unexpected close, since they haven’t heard anything from their own people in much too long. When they embarked on the journey, they knew that essentially, they have no idea where they’re going and if they’ll come back. But when that slowly starts shifting towards becoming reality… They don’t like it anymore. More than that – they realize they are now in the hands of their so called ‘artificial stupidity’, that wasn’t designed to be very smart (or they themselves wouldn’t be necessary). The whole book revolves around the relationship between the natural and the artificial intelligence and their coexistence. Who will win?

It’s For The True Scifi Fan

A GIF of a girl saying to a boy, “How do you even know that word?”

This is no light reading, it’s full of science speak – real and fake, but really intricate and atmospheric. It’s been a while that I’ve read such a convincing scifi! Puts you right on the spot, on that weird, incredible, mind bending ship that seems to travel back in time, bite wormholes in the fabric of the universe and outrun gremlins that come out of them. Seriously though, if you don’t like scifi speak, then this isn’t a book for you, probably. It was hard to picture even for me, being a scifi fan, in places – but it was well worth it, and it was definitely incredibly enjoyable. Give me more!

A GIF of a drink, most likely whiskey, being poured into a glass sideways, probably due to changed gravity conditions. It looks very scifi.

You will see a lot of very interesting places on this trip. Forests in a space ship. With miniature suns and leaves blacker than black. Gravity wells. Mysterious things you find on the other side of wormholes. Some living, some… perhaps not, but you can’t really tell? You will also find dancing artificial intelligence. And tribal art on a space ship. This book has it all! My imagination took a wild ride. It was one of those stories you read while feeling like you’re actually watching a movie. It was an incredible experience.

The Moral Side Of Natural vs Artificial

You might have already gathered from my blurb that this book deals with the interesting question of intelligence and its sources, as well as natural versus artificial intelligence and their relationships. Which is the true, the real one? Is the other one just a sequence of pre-planned actions? Or does it actually have a mind? Perhaps even a soul? Is it living?

Sunday, the main character, has a stronger relationship with Chimp, the ship’s artificial intelligence than many others on the ship. To them, Chimp is but an AI, they don’t even consider him to be alive. But Sunday? Instead of calling Chimp ‘it’, she calls Chimp ‘him’. Deep down, she considers herself and Chimp friends. Sunday is a very complicated and interesting character herself – she’s very detached, either a result of trauma before the mission, or maybe it’s just the way she is – but she doesn’t quite see the whole picture when it comes to figuring out everything that’s going on around her, or understanding other humans. So she has a really hard time making her mind up about the course she is going to take. And even when she takes it, she constantly thinks and rethinks it all, wondering if what she chose was right.

A GIF of a woman’s face looking nowhere in particular with a sad expression, deep in thought and seemingly crying

Being A Teacher’s Pet With Stockholm Syndrome

And this brings us to the next part. Sunday is very confused about her feelings, because she both knows the AI is not looking out for her interests, only the interests of the mission – but she also has an emotional attachment to it, antromorphises it – and she doesn’t know if he really has a personality or not. If he’s sentient or not. Fighting a battle for the insurrection, she is also fighting one with her own self – should she betray something she thought of as a friend, but might just be a ruthless machine, or not? Maybe it’s alive after all? Maybe it did care for her, for them? Did it not display a special fondness for her, compared to the others?

When I finished reading it, I was actually surprised that this was a novella. I was convinced it was a full-length book! I think, considering the length, it’s somewhere between the middle, but the fact remains – it’s a shorter format, and yet, the book was completely fully fleshed out and didn’t lack anything, in my opinion. I’ve read novellas where the format itself took away from the story – but not in The Freeze-Frame Revolution. Both incredibly smart, imaginative and well written, in my eyes, it’s a full-fledged novel in its own right.

GRAB IT! NOW! I just can’t begin to tell you how much I loved it. And I know for a fact I will be reading it again, and perhaps soon (mostly because reading the ending when you’re borderline falling asleep does not work out in the best interests of you actually understanding what happened! LOL) I already have another book by Peter Watts, and I can’t wait to read it.

I thank Tachyon Publications for giving me a free copy of the book in exchange to my honest opinion. Receiving the book for free does not affect my opinion. You can buy the book here at Book Depository and buying using this link supports the blog.

Have you read anything by Peter Watts? Do you read a lot of scifi about artificial intelligence?