Today I want to share a book series that’s been really warming me up in the past half a year or so. A Summoning of Souls is book 3 in the Spectral City series, a story about the living working with the dead on a common goal – ensuring the safety of New York. The books focus on the first Ghost Precinct of the Metropolitan police, entirely run by women who are all sensitives and have a great respect for the souls of the departed. The series is filled with such warmth and love, as well as respect for cultures and people’s stories, that it makes for an especially encouraging read in the year 2020.

The Summoning of Souls is the perfect closer of the story that’s been unfolding in the first two books, The Spectral City and A Sanctuary of Spirits. I don’t know if it’s the last book in the series (I hope not!), but I know I would still love to hear more about these lovely characters the story is about. If you’re thinking of checking the books out, please see my review for The Spectral City and A Sanctuary of Spirits, and now let me tell you what I loved about A Summoning of Souls!

Are you ready to dive in to a story filled with such warmth and love that it makes for the perfect read against the moods of 2020? Check out The Spectral City series: Click To Tweet 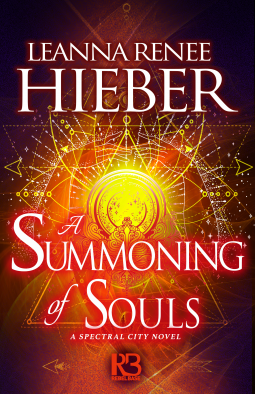 Check out on Goodreads
★★★★☆ 4 stars
How I read this:
free review copy on NetGalley

The first two books start us off with the Ghost precinct having just opened and solving its first cases. However, things don’t go very smoothly, and with the first serious villain, the precinct has to close and the operatives go into hiding.

But that won’t stop Eve and her colleagues – in this last book, A Summoning of Souls, they’re ready to deal the final blow. Not only will the ugly history of the Prenze family and their ghosts be explored, but the final touches will be put on the romance we’ve all been waiting for! In A Summoning of Souls, everything spins off to a close in the most perfect way possible.

A Summoning of Souls Is Like A Time Machine

So the first reason to read this series that I’m going to tempt you with won’t be about the story itself – but rather, about the mood. To me, the books in The Spectral City series are just like a time machine! That’s definitely one of the reasons I enjoy them so much.

The Spectral City, A Sanctuary of Spirits and A Summoning of Souls are full of descriptions of New York in the time of 1899, as well as people’s customs and even clothing. (I spend a particularly great amount of time googling the dress names and clothing styles to see it all better in my head.) Leanna Renee Hieber really does bring this spectacular decade of the turn of the century to life. And I am not surprised she is so well versed in writing this! Check out the photo Leanna has on her website and social media – it really does show you she has a particular fondness for the vibe of the times: 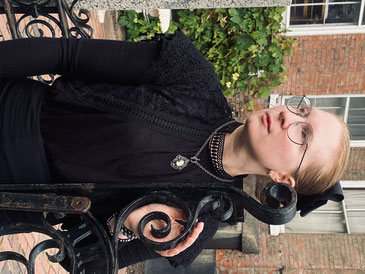 A photo from Leanna Renee Hieber’s website: it’s Leanna, standing in front of a reliefed wall, wearing a lovely black retro dress with a cameo, and a hairstyle to match the ensemble

If you follow my blog, you may know that I’m VERY particular about my romance – and often, I’m not a big fan of it in general. Well, that’s just because apparently, I was born in like the 1850’s and my idea of how romance should be presented to me is from way back in the day! (Hah.) Which is why I am a HUGE fan of the romance in A Summoning of Souls and the other books in the series. It’s a soft, slow and very cautious romance, which would have fit the social mores of the times – the scanty chance of intimacy, the idea of ‘less is more’ and all of the blushing in the world. (Plus, this is a romance that started as fake dating. Any fans here?)

A Summoning of Souls has the perfect romance: it's soft, slow, cautious, befitting the year 1899 – the scanty chance of intimacy, the idea of 'less is more' and all of the blushing in the world. Swoon! Click To Tweet

The slow burn love affair between Eve and detective Horowitz continues! I am a big fan of this pairing, and I can’t help falling in love with them both. In A Summoning of Souls, Eve and the detective finally become ready to face the facts – that there IS something between them, and it’s not just a sham to get their respective parents off both of their heads. The romantic tension between them electrified me! And they were both so sweet.

Detective Horowitz is the kind of soft gentleman that I especially liked seeing as a love interest in a book. He is sweet, gentle, a perfect gentleman, smart and also discreet. He will not rush Eve, but at the same time he comes across as mature – not childish, as you may assume from my earlier description. I love his character! It was such a pleasure to read more about their blossoming relationship and the respect they afford one another.

A World With Hope

Perhaps what I liked most about these books though, is the central idea that they have – that despite all measure of hardship, the evil will be overcome. And despite how powerful the bad guys may be, there’s always an equal or even bigger opposition of good guys who will fight them.

In 2020, when the everything has been quite a hot mess all year so far, THIS is the notion I want to have of the world. Reading this kind of story brings the hope back. And I can tell that the author truly believes such a world is possible, because she writes it with great conviction. It really steadies me to read stories like that.

But that’s not all – yes, it’s a world with hope. But also, all the characters who are fighting for good are just so full of integrity and so wonderful. I can see how some people might say, “oh, they’re all just too good – real people are never like that”. That may be so, but this is fiction – and you know what, I want to read about characters who are full of honor, humility, self-control and compassion. I want to believe that maybe, to some people, this is a reality. It makes me feel better about the world. I wish more fiction existed that was like this.

@Leannarenee writes her world full of hope, and her characters kind and full of integrity. THIS is the kind of storytelling we need in 2020: Click To Tweet

The Spectral City Series Is Great At Recaps

Whenever I read a series and there are large gaps between the books, I worry about remembering what happened in the previous books. I read a lot of books and my memory generally isn’t that great. But with A Summoning of Souls, there was nothing to worry about. Leanna Renee Hieber catches you up with the story so well! But at the same time, it’s just so natural and seamless that it wouldn’t get boring even for a person reading all the books straight in one go. Writing story recaps in this manner is a huge talent.

A Summoning of Souls is full of warmth and hope, and it may give you back some belief in the world. It's respectful, diverse, soft and very, very sweet! Click To Tweet

I really enjoyed the whole Spectral City series, as well as its ending, A Summoning of Souls. I really can say that I recommend this series to you wholeheartedly! It’s full of warmth and hope, and it’s just a book that may give you back some belief in the world. It is respectful, diverse, soft and very, very sweet!

Have you read any stories with ghosts that aren’t quite ghost stories – they’re not intended to be scary, but rather incorporate ghosts as simply the other characters in the story?