The Writing of the Gods is incredibly easily readable and instantly draws you in. It’s very easy to jump into even if you have never read anything of the like before – it’s very friendly to any reader (barring maybe children, but I know I would have enjoyed it as a teenager myself.) This is a great thing for nonfiction, because quite a few nonfiction authors fail to make their books accessible to non-academics. In fact, I may have not noticed this, if I wasn’t reading another nonfiction book at the same time as this one (Kindred – a book about Neanderthals), and found them in stark difference of accessibility. Where Kindred fails to explain cryptic terms, The Writing of the Gods doesn’t even use them where it can be avoided, therefore making your reading experience natural and accessible. 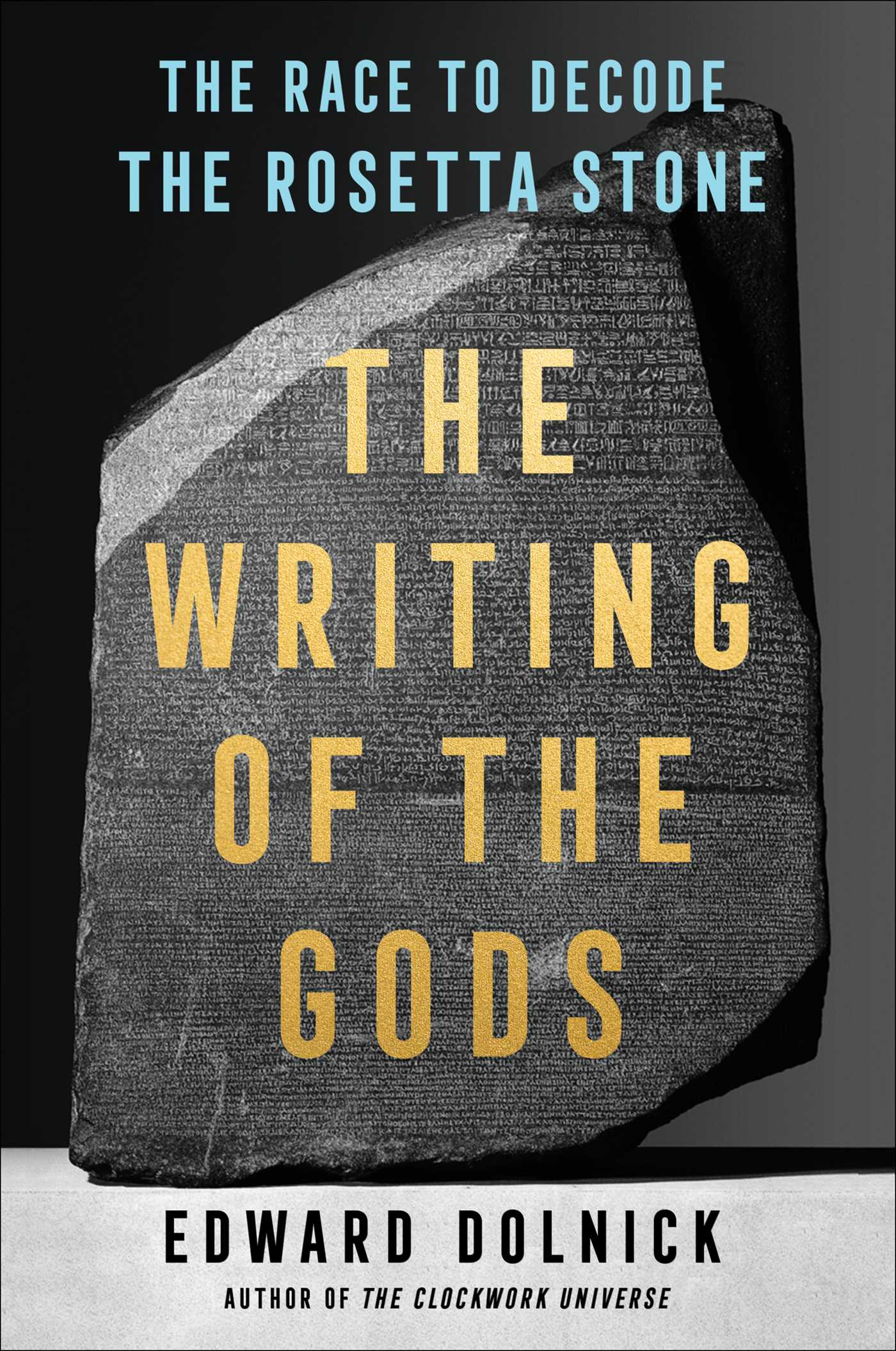 Check out on Goodreads
★★★✬☆ 3.5 stars
How I read this:
free ebook copy from Edelweiss

That said, one thing I noticed was that this book was a little repetitive. It sometimes comes back to the same bits of history and glances over them again, almost as if there was not enough material and it’s trying to fill out the book? Then again, at the end the details on furthering the efforts of decoding after Champollion and Young’s deaths were nearly glossed over in just a couple of pages, and I found that odd as well, so maybe it’s just the chosen pacing, which I wasn’t sure I liked so much.

What made me think this was the case even more so, was that there’s not a whole lot about the deciphering of the script in general, at least not until the very end. At least a third of the book is about how the stone was found. Then there’s quite a bit about Young and Champollion, the men who were trying to crack the code. And only then it starts on the decoding itself, all the while going on many tangents about who helped whom transport unrelated Egyptian obelisks to this or that country and on with their life stories as well.

At one point it even went on a tangent on how writing in general was invented, and that’s straying quite far from the original topic, in my opinion. It’s almost as if there’s not enough information to make the story of the decoding full enough without the extra bits about, say, Napoleon and Nelson (don’t get me wrong, those were interesting too, and I’m probably going to pick up some nonfiction about Napoleon, too.) 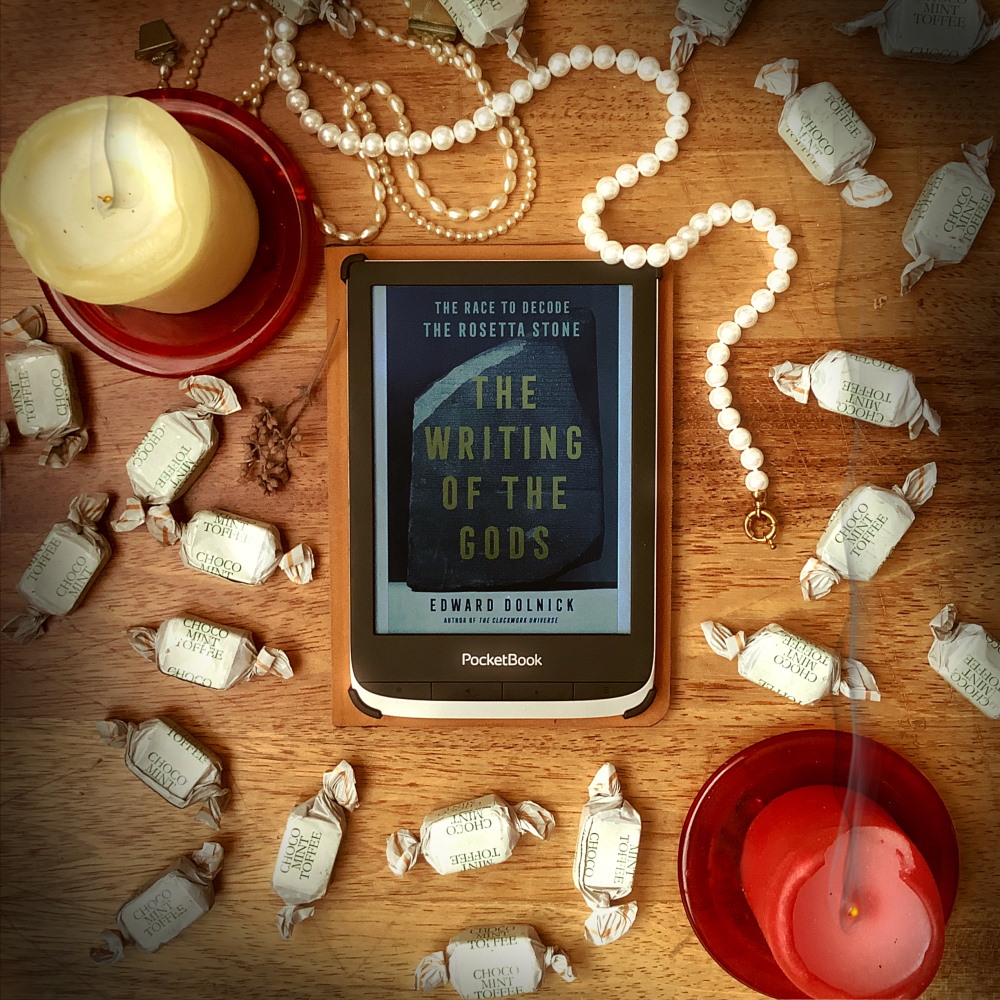 An image of the cover of Writing of the Gods on a Pocketbook Color ereader, there are candles around it and some necklaces and candy scattered all around; Photo by AvalinahsBooks

Anyway, if this was the only book I’d read about deciphering, then maybe I wouldn’t be saying it – but my bar is set extremely high, as a year or two ago I read The Riddle of the Labyrinth – the story of deciphering Linear B. It seems you can’t write a thrilling story about that sort of thing, but you totally can, and the author of The Secret of the Labyrinth proved this – I was glued to the pages, reading it like some high-stakes adventure novel. The Writing of the Gods is a great book, but it’s nowhere near The Riddle of the Labyrinth. When I think of that book, it’s almost as if my eyes glaze over as I peer sightlessly somewhere over the horizon.

However, despite all the tangents and a slow start, the book did satisfy my curiosity at the end. It does talk about the rivalry between Champollion and Young a lot, it details their characters and their life stories, but most importantly – in the second part of the book there is sufficient info about the way Egyptian writing works. That was the bit that interested me the most, and it delivered. The Egyptian writing system definitely has got to be one of the more interesting ones, so I was very happy to read the examples and explanations.

Ever wonder how the Egyptian hieroglyphs were decoded? The Writing of the Gods by Edward Dolnick: Click To Tweet

The Writing of the Gods is an easy to read account of how the Egyptian hieroglyphic script was decoded and understood. There are a lot of hystorical details not only about finding and working with the Rosetta stone, but also about ancient Egypt and its traditions as well. The book may feel a little repetitive, but if you know nothing about this bit of history, you should enjoy it for sure.