I’m an unlikely reader of fantasy adventures, but there’s one series that’s settled deep within my heart, and it’s definitely got a place to stay. I couldn’t really call it a series in a linear sense, it’s more like a couple series all about the same world – the world of Arvia, as crafted by D. H. Willison. I’ve simply fallen in love with this place!

You might remember me raving on about these stories here (Harpyness is Only Skin Deep and Find Your Harpy Place) and here (Hazelhearth Hires Heroes).

And whenever you love coming back to the world of a story so much, it always feels so good to hear that there are many more stories planned to go on. It’s why I’m doing this interview today!

So today on the blog, we have D.H. Willison – to talk more about the stories set in the world of Arvia, and where the future may be taking it. An image of the cover of Love, Death or Mermaid? on a PocketBook Color eReader, with a faux pearl necklace on it, candy all around it, there’s a dried flower bouquet and a large book behind it, a candle on the left. The cover is mostly blue, it features a mermaid, angrily staring at a ship with red sails in the sea; Photo by AvalinahsBooks

Please introduce us in brief to the world of Arvia. What kind of adventures are we in for, if we decide to follow your books into this world?

Big monsters. Bigger friendships. Arvia is a weird and dangerous world. My protagonists are frequently underdogs. But they survive–and win through wits, empathy, and the help of friends. You’ll find the most unlikely of friendships as people and monsters alike find there can be strength in their differences.

How was the world of Arvia born in your imagination? What inspired it? 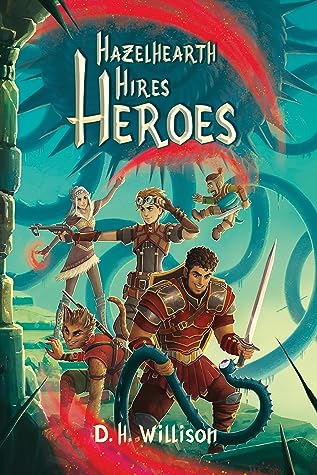 Check out on Goodreads
Hazelhearth Hires Heroes
by D.H. Willison

I’ve been inspired by fantasy since I was a boy. As soon as I learned to read, I could be found on our living room floor with my nose in one of my family’s collection of Wizard of Oz books. And it was probably that that got me interested in fantastical creatures, and especially my love of creatures larger, smaller, or just plain different than humans.

But my list of inspirations has grown very long over the years. From classic mythology to modern SFF, manga, comics, even video games (look closely, and you’ll find a few easter eggs from “The Secret of Monkey Island” in my books.) In fact, there are a lot of easter eggs in my work. Names, anagrams of names, locations, names of boats and ships.

Here’s one little hint. Does the cover composition of Love, Death, or Mermaid remind you of anything? For most people probably not. If you read Tintin as a child, it just might. I asked the artist to use the cover of The Black Island comic as a design reference. (Yes, I know the Hergé version didn’t have a giant mermaid in it.)

What do you base your lore on? Are there certain inspirations in the media (books, games and other stories) that you have incorporated into your world? 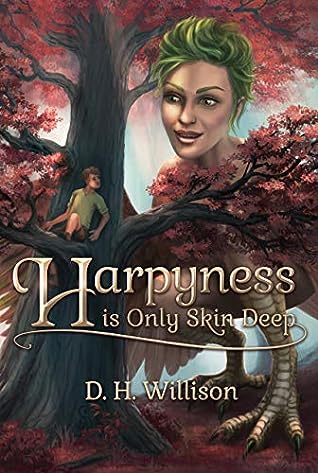 Check out on Goodreads
Harpyness is Only Skin Deep
by D.H. Willison

Many of the creatures/concepts have roots in classic mythology, or in some cases, biology/science. I get ideas from everywhere (including other fiction, games, etc), but I’ll do a lot of research about the history of a specific creature/myth, and then think through the consequences of some of the mythology or biology. Let me give an example: harpies.

The mythology varies quite a lot, with some versions portraying a beautiful, humanoid woman with wings, others a more bird-like creature. Some versions portrayed them as foul smelling, whose mere presence would spoil people’s food. So there’s a lot of leeway. But personality is the really fun part. The most interesting part of non-human characters for me, is not how they look, but how they think.

Many stories portray harpies with rough language, which can be fun to work with, but one of the more interesting ideas is that they are creatures sent by the gods to punish the unfaithful. So, let’s extrapolate–if they punish wrongdoers, especially those who cheat, it could follow that they would be loyal to those who’ve proven themselves worthy of their trust. From there, I think about how their culture might develop, and then how an individual within this culture would grow up.

And finally, there are biological aspects that might come into it. A creature of the air would have to have excellent spatial acuity, and probably be very good at math. With no hands to write things down, they might also have well-developed memories.

What are the themes you most want to explore through your books? 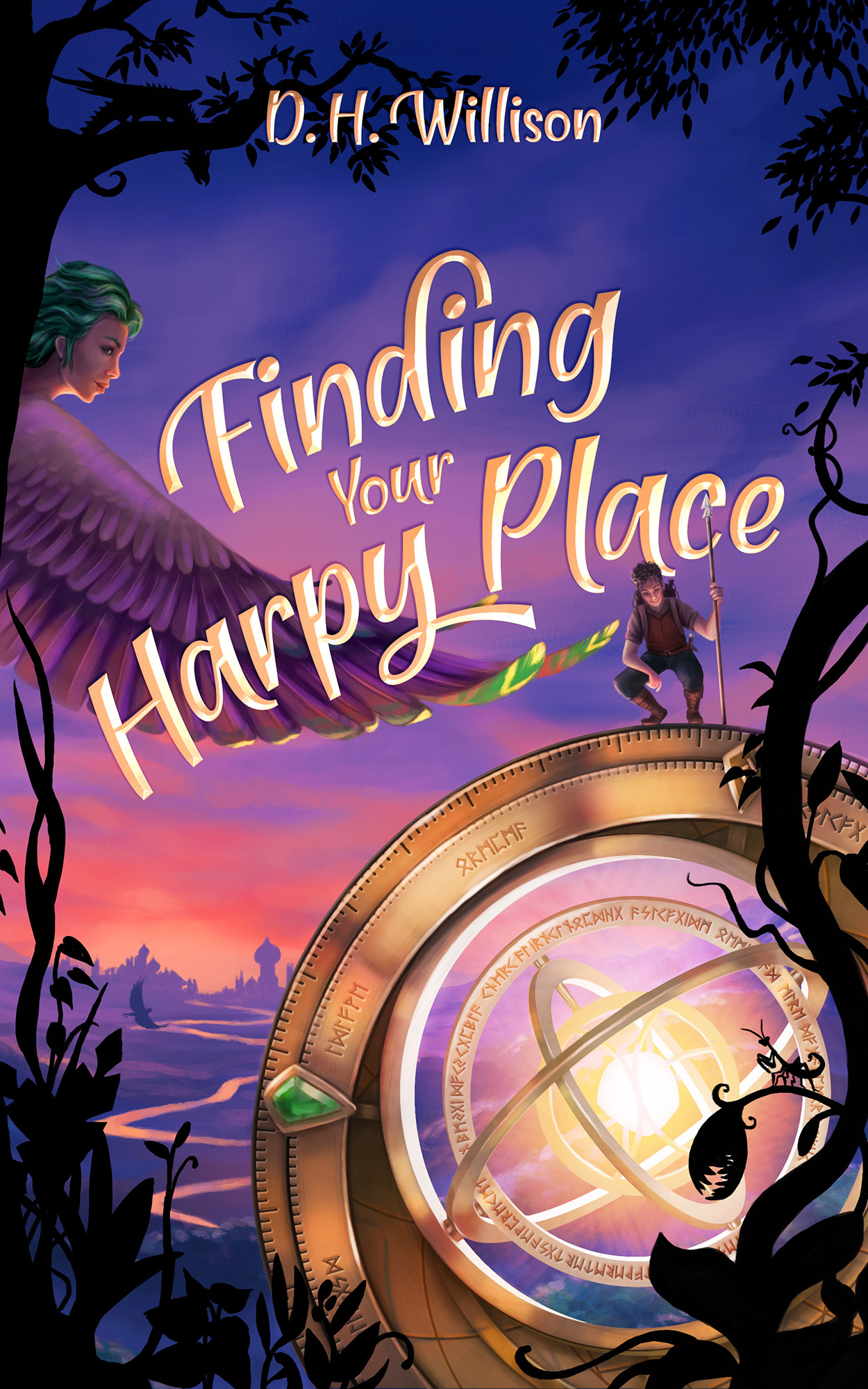 Check out on Goodreads
Finding Your Harpy Place
by D.H. Willison

Honestly, creative, alternate conflict resolution is a big one for me. Sure, it’s fun to run around blasting fireballs and hitting things with swords. But that doesn’t have to be the default solution for everything. Many of the giant creatures on Arvia are intelligent and can speak. And where there is communication, there can be understanding.

Arvia is specifically designed to completely subvert some of the more typical fantasy conventions and tropes. The toughest, strongest, most magically powerful humans are not top dog. In fact, they’re more likely to die, due to overconfidence, due to fighting things when they don’t need to. One of my favorite movie scenes is from The Holy Grail, when Lancelot provides his favorite color and just walks past.

Of course, you can’t talk your way out of every conflict. But even where you can’t, the idea of being creative pervades my work. For example, the scene where Darin rescues Rinloh from the beast hunters through the creative application of magic novelty popcorn is a particular favorite of mine.

And finally, there is an optimism and hope that flows through my work. Sure, things may look bad. Really bad. But it’s a core belief of mine that people… or aliens… or giant mythic creatures can work together for a better world. They have to want to.

What drew you to writing fantasy altogether? Why fantasy, and not scifi or contemporary, for example?

Honestly my first book could have been a scifi. Actually my first book was a scifi, but I never published it. I may edit and publish it at some point. It was a novel about a somewhat low-tech team of scientific explorers. Basically Star Trek with steamships instead of starships. I don’t actually draw a hard line between fantasy and scifi–it’s really kind of a continuum for me, how much science versus how much magic. As far as contemporary fiction, I have nothing against it. But when you write a book, regardless of genre, you are creating your own world. You can choose for that world to be virtually identical to the one we live in, or you can let your imagination run wild. And I have a strong preference for free-range imagination.

You now have a few different stories set in the world of Arvia. Are you planning to stick to the storylines of the same characters, or are there more stories in the works? Tell us more about the stories that are already out, the ones which are coming out and the ones that you’re planning. 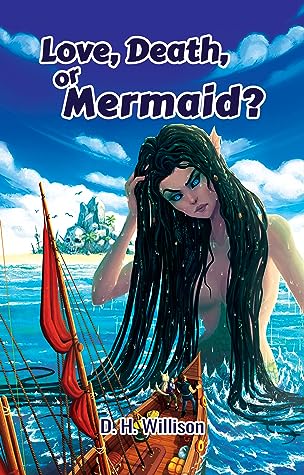 Check out on Goodreads
Love, Death, or Mermaid?
by D.H. Willison

The next story to be published after Love, Death, or Mermaid? will be a continuation of the Tales of Arvia series. This one will be centered around an environmental disaster. OK, it will be centered around a certain harpy and a certain human, but they will be dealing with a series of mysterious tremors releasing wild magic and wilder creatures onto the surface world.

After that, no specific plans. I have ideas to continue with the characters of Hazelhearth Hires Heroes. I really like the themes of found family in that one. And by the end of that story the characters were really coming together as a team. Even the characters of Love, Death or Mermaid? have the potential for an additional book (and some readers may notice a bit of cross-over potential between that, and the Tales of Arvia books. Which ones come next? I haven’t decided.

I try to write all my stories to function as stand-alone, so at least there should be no cliffhangers for my readers regardless of the publication order.

I may even take a crack at editing and publishing my original scifi novel. If I had infinite time, I’d like to write all of them. Yet, sadly, there is this thing called ‘sleep.’

One other thing I’ve always wanted to do was to create a special edition of one of my books with special binding, interior illustrations, bonus material: a real work of art. I don’t yet have the following to run a kickstarter campaign to create such a masterpiece, but it’s definitely a long-term goal.

Thank you D.H. Willison for the interview!

Here is more info about the coming book “Love, Death or Mermaid?”:

Opportunity knocks on the humblest of doors. But it knocks only once.

When an overheard conversation leads to a hunt for a long-forgotten pirate’s treasure in the sunny tropics, Herbert can’t believe his luck. With shipmates including the charming if somewhat feline-featured Katie, a suave and dapper captain, and a hyper-competent crew, such an opportunity seems too good to be true.

And we all know how that usually turns out.

He soon discovers that said adventure vacation of a lifetime comes with minor downsides, such as being hunted by giant sea monsters. Including an alluring—if somewhat bloodthirsty—mermaid. Additionally, the term ‘lifetime’ refers to a significantly shorter time-frame than he envisioned.

Set sail on the high seas of Arvia! (Must supply own cutlass.)

A stand-alone novella on the world of Arvia, intended for adult or young adult readers.

The first three chapters (which the author promises don’t end in a cliffhanger) will be available for free here on his website, while the entire novella will be just $0.99 on preorder on Apple books, Barnes and Noble, and Amazon Kindle. A paperback is available for $5.99 at Barnes and Noble. Banner of all books currently published by D.H. Willison: Harpyness is Only Skin Deep, Finding Your Harpy Place, Hazelhearth Hires Heroes and Love, Death or Mermaid? Image by D.H. Willison

If you would like to support the AvalinahsBooks blog, please visit our family’s Etsy shop! We sell bow ties, collectable toys, linen items and more. Shop small ❤️