When I started reading Villa of Delirium, I didn’t know for sure what it was about – I often start novels without looking into it much – I’d rather the book tell me the story than the blurb. And the blurb told me it was set in a beautiful Greek villa, built based on ancient styles. That’s something I’ll always want to read about.

But when I finished the book… It turned out that the people Villa of Delirium was about were real, and the villa actually exists! I had never heard about it before, and it stunned me. I am still spellbound from taking the virtual tour which you should absolutely take and reading the NY Times article on it. Wow. Take that tour and tell me you don’t want to read a book about it?

A Tour Of A Forgotten Age Through This Amazing Historical Novel – Villa of Delirium by Adrien Goetz, ★★★★✬ 4.5 stars: Click To Tweet 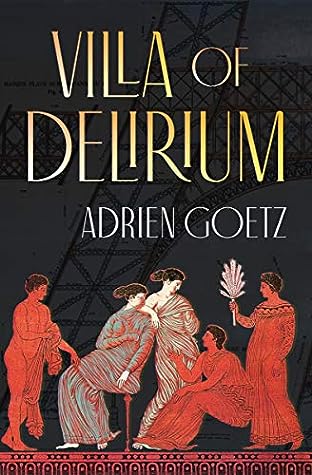 The Villa of Delirium is a story of family tragedy, told by a person who is both only an onlooker, as well as a sort of participant. Achilles, a boy from a poorer background has been all but adopted by a family of rich intellectual Jews at the turn of the century. He spends all his time with them, sees their majestic Greek style villa being built, even starts learning ancient Greek on the guidance of the head of the family.

Apart from being a family tragedy, it’s also a completely separate (and quite tragic) love story which the main character experiences during his time there. But more than that, it’s also about the majestic house that everything happens in. In fact, this book is just as much about the house and art as it is about people.

Villa of Delirium is a slow story. It meanders back and forth – you will know everyone’s futures before you even get to meet them properly – but it does so at a very leisurely, chill pace. It does set a tone that matches the virtues of the people who lived in the house.

I enjoyed how some of the more pivotal developments were likened to scenes of the art depicted in the house as murals, mosaics or other works – they tied in the story to the house, and more importantly – brought back the idea of how it is the life that we live that becomes art, rather than the other way round.

In the 21st century, art often seems so far removed from our reality – especially older, more classical art – but I feel like Villa of Delirium wanted to stress how that same art actually came from life first, because it comes from human dramas and feelings. Our life is art. Everything is art – but we forget it.

Everything in life can be art – life is what art comes from. But we forget that. The story of Villa of Delirium will remind you: Click To Tweet

The Clash Of Centuries And Worldviews

Villa of Delirium is set before World War I, and then some of it is also about the time in between the two World Wars. Basically, it is set in the time that was hard to reconcile with what followed. The main character is reminiscing about his days as a teen, living in a really curious house – a house built to be like a real villa from ancient Greece. A house where the main thing is aesthetic, and all the values are so different from those of today.

The villa belongs to a rich and very intelligent, cultured, educated Jewish family. The place, time and the circumstances is what makes this such an otherworldly setting. Part of the tragedy is the loss of this way of life, and the inability, even the unwillingness of the villa’s patrons to understand or accept that this way of life is coming to an end. This whole story is about clashing centuries and worldviews – one lifestyle being forgotten in order to adopt another.

The clash of old and new worldviews at the start of the century, with the backdrop of art and intellectualism – read the story of Villa of Delirium: Click To Tweet

There is a lot in Villa of Delirium about hatred towards Jews before WWII. It’s not so much a central topic, rather than a theme that the story keeps coming back to. The main character recollects many small instances where people of all sorts of backgrounds expressed inexplicable, ungrounded, cruel and blind hatred towards the family of his benefactors, who were Jewish.

He talks about the jealousy of the villagers, about their unwillingness to see the family as they actually were and the way they’d rather put them into references that were familiar to them – old, harmful stereotypes of a family of rich Jews. The main character of this book failed to understand why this happened when he was young, and since he narrates when he is old, he revisits this with bitter regret, as well as with a knowledge of the worldwide events that come as a consequence.

There is a lot of feeling in this book in regards to the harm that was done to the Jewish people by this petty and uneducated hatred that came through and bubbled up into something unimaginably horrible with the advent of the second world war.

Villa of Delirium is about a rich, intellectual Jewish family at the turn of the century, before all the horrific events of WWII. In this novel, you can see anti-semitic moods stirring up: Click To Tweet

Villa Of Delirium Is An Escape

In the end, the Villa serves as a place of escape for the family in the book – an escape from the real world into a world that valued other things, revolved slower, a world that was safer. A world where one wouldn’t have to prove their intelligence or their motives, and a world where one’s family could rejoice in being their own peculiar selves as much as they wanted, despite all the grumblings of the town’s dairy maid or baker, or even the intellectuals at Paris.

And as anyone who makes this kind of escape, you know that running from reality is dangerous, because it will catch up to you. This book is the story of such a thing – it doesn’t have a particularly grand plot of any sort, it’s more like it shows you vignettes of a life lived, and they illustrate the beauty, and yet the tragedy and regret of living a life you wanted to live, of seeing what you want to see and escaping the rest, and all of this – through a child’s, then a young man’s eyes, shaping his world view. It’s a sweeping story, and it’s told more in images rather than storylines. I greatly enjoyed it.

The tragedy and regret, and yet the sweetness of living a life imagined and a reality escaped – all this in the sweeping story of Villa of Delirium: Click To Tweet

I thank the publisher for giving me a free copy in exchange to an honest review. This has not affected my opinion.

Villa of Delirium is a story of family tragedy, but more than that, it's also about the majestic house that everything happens in – The Villa Kérylos. Click To Tweet

Have you read any books based on real life homes or families?
Have any of them been this spectacular, historic and unique?