Tomorrow Factory felt like such a catch when I got a review copy on Edelweiss. But then when I started reading it, it just failed to capture me. It’s written well, and the ideas are fresh and quite strong, but I guess in the end it just wasn’t for me. You’ll like it if you’re into the eerie and cold robotic future scifi though! 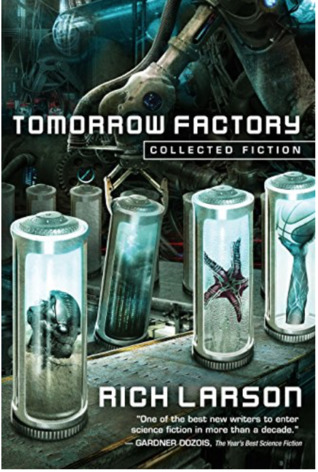 Tomorrow Factory is a collection of short stories that are quite out of this world – set sometime in the somewhat far future, they all paint a desolate, cold, but very interesting world where some things are done by ones depraved, and some – merely by the ones incredibly bored. From the criminal who uploaded himself into a war machine to protect his daughter to the bioship who wanted to have its whole family within it – it’s all about consciousness seeking an outlet and expressing oneself. If you are a fan of dystopian and very inventive stories, you will enjoy this collection.

The Stories Have A Running Theme

It was hard to pick out at first because the stories are so different from one another, but they do have a running theme. Having closed the last page of this book, you will see a very specific kind of world in front of your eyes, and it’s by showing all these different people that the author wanted to show you the diversity of this world, I think. The running theme is pretty dystopian, like I mentioned, and that’s why it was hard to read for me – it doesn’t shy away from gore or just the eerie/creepy, and it certainly doesn’t sugarcoat anything. Some of the stories will make you ponder the direction we’re clearly heading in. Most of them highlight some problem of society or humanity as a whole, like short stories commonly do, but some of them also celebrate the more positive traits of what it is being human. The only problem with that is that it’s usually not humans being… human.

A GIF of robot hands built specifically for clapping, and they’re… clapping

Which brings me to the next point. There are so many different kinds of consciousnesses here – the construct who uploaded himself into an illegal robotic body and is trying to dream. The rebel who uploaded himself into a war robot to stay alive to protect someone he loved. The alien loner who helps humans lie to themselves about how desolate and destroyed their real world is. So many different creatures, so many goals, so many points of view. That is certainly one of the most interesting points of this collection.

Being Human Is The Connection

While trying to locate the common ground of all these stories, I realized that mostly they are about AI or some other non-human consciousness, either attempting to become human, or having a hard time figuring themselves out – trying to learn to dream, trying to get a body, to experience illness or to integrate themselves with other humans, even if that means physically. It’s not the only theme of the stories, but it’s certainly a common one. Sometimes they succeed. Sometimes they don’t. In a way, that made for an interesting analysis of what it is being human in general. Where does it begin and where does it stop? What makes the equation complete? What closes the circuit?

Where It Fell Short For Me

While the themes and the atmosphere were certainly interesting, and I can agree that it’s a wonderful debut, I feel like it’s not really for me. It was dark, brutal and I found my mind wandering at times. It felt long and I struggled through it. At times I felt like I’m not being engaged. Ultimately, that’s my usual problem with short stories, because for me, it’s the characters that drive a book, but even that said, the stories were too dark and too desolate. Another thing I didn’t quite understand is that there were a couple of ‘stories’ that were a paragraph long. I must be too simple to understand the point of that.

If you’re a fan of very futuristic or dystopian scifi, or even horror, then definitely read Tomorrow Fiction. But if you read scifi for the characters and a clean future, then Tomorrow Fiction is not for you.

Beware Of The Triggers

As I mentioned before, there is a lot of gore and possibly some horror elements to this book. You will naturally find violence too. It wouldn’t be enjoyable for sensitive or young readers.

I thank Talos Press for giving me a free copy of the book in exchange to my honest opinion. Receiving the book for free does not affect my opinion. You can buy the book here at Book Depository and buying using this link supports the blog.

Do you read a lot of dystopian science fiction and have you read Tomorrow Fiction or Central Station?