Now that I look back, I realize I should have read To The Edge of the Sky much sooner. But for some reason, it took me a year to get to it. I got it after I read a great review by a friend, but reading real stories from 20th century China is usually quite depressing, so maybe I just wasn’t ready. Now I realize that reading about real life hardship can sometimes even help when you’re down, because it puts things into perspective. And this book really does that. To the Edge of the Sky explores the depth of human existence in hardship, and it does it in such a down to earth way that you won’t be able to pry yourself away. I stayed up to read it. 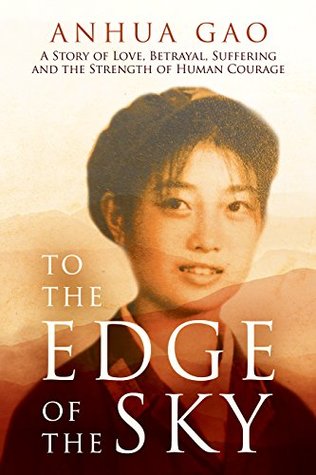 Anhua is a child born on the year of the Chinese revolution. When you read that she’s the daughter of two revolutionary martyrs, you sigh in relief, thinking, surely she won’t be subject to the horrors that are to come in the history of China. But you are wrong. You are so wrong… Despite being lucky in a lot of ways, Anhua experiences her fair share of terror, as she comes of age during the Cultural Revolution, as she tries to raise a child in an abusive household, as she tries to prove her innocence to the government – which is impossible in the given circumstances. To the Edge of the Sky is a gripping, sad and very honest memoir of one girl full of belief in the future of her country, growing up into a woman, disillusioned by the leaders and running away, because even when things are good, you know they’re never good for long.

To the Edge of the Sky is not a history book, but it made me think. What if history was taught in a way where we couldn’t help but relate? In a way that provokes your empathy, through real stories and real people? Instead, it is taught through dry textbooks, and after you write the test, you’ll never remember the boring details.

A GIF of a girl, falling asleep during class

I’m not sure I even studied any contemporary history of China in school. Now though, I know I will never forget the history of the Chinese Cultural Revolution that was told in this book. And this was only one perspective, one person’s life, with some side characters and their lives mentioned.

What if we told our histories through the lives of the people who actually lived it?

The history of the Chinese people in To the Edge of the Sky is told one at a time – lives built one at a time and then slowly dismantled, with growing intensity. The story is told with immense sincerity, there is no added drama to make it more colorful. Opinions are not forced on you, instead the author shows the thoughts and feelings she had at the time. When it’s told in that way, you can see the slow progression of the author, changing from an all trusting child of the revolution into a disillusioned youth who can’t help but think her own thoughts, but has to conceal them from everyone else.

A GIF of a group of people running, all looking exactly the same

To the Edge of the Sky explores the depth of human existence in hardship, and it does it in such a down to earth way that you won't be able to pry yourself away: Click To Tweet

A Song To The Suffering Of Chinese People

A GIF of a tear rolling from a woman’s eye

More than anything, this book is a song to the suffering of the Chinese people at the hands of nothing else but some really sick and twisted bullies – a whole mass of bullies, governed by one psychopath at the helm, making the country into one bloody, messy circus where nothing is sacred and all humanity in a person dies, or is helped to die by killing the host, if it has managed to survive. The thing that is the most baffling to me about what happened in China is… That for example, the Nazis or the Soviets mostly killed, tortured and tried to exterminate only what could be called “other people” – the jews for Germans, or people who went against their ideologies. For the Soviets – mostly people from the occupied territories, and also, of course, the rich and independently minded. But China… In China, there were no “others”. After the initial revolution rolled through the land, there weren’t even really any rich people left. The Chinese revolution ate itself, I guess somewhat like the French one, except it didn’t burn out. It damaged its own people, and at least in my probably uneducated view, it seems much more directed at those very people it was trying to save than the other terror regimes that existed at the time. For in the USSR, you had to be in opposition or burgois, in Nazi Germany you had to have a certain kind of genetic factor about you, or, at the very least, disagree with the regime. But in China? It was enough to be around 14-21 when the Cultural Revolution was happening to be effectively exiled – just like unwanted elements were exiled to work camp in Siberia. In China during the Cultural Revolution, it didn’t matter if you agreed with the party or even what kind of family you came from – if you were born in a certain year, off to the work camp you went, and that was most likely the end of your life, or at the very least your health, your future or your family. I find that truly, deeply terrifying.

These Stories Must Be Witnessed – By Us

A GIF of eyes drawn in pencil, opening and looking at you

It’s hard to fathom these things that happened while most of our parents were already alive, somewhere in another part of the world. It’s hard to understand how or why such deliberate destruction of its own people, its own society made sense to the ruling class of China at that time. Its tragic, painful and hard to believe, but it has to be witnessed. And it can be witnessed by learning the stories of these people. To the Edge of the Sky is one of them.

So if you think you’ve been suffering, read To the Edge of the Sky – it will humble you. It will make you see what happens, when basic kindness and empathy is removed from the equation. What seemingly little deeds may do, change in the long run – for the better or worse. History can be a warning to us. Let it be the warning.

If you've been suffering, read To the Edge of the Sky – it will humble you and make you see what happens, when basic kindness and empathy is removed from the equation. History can be a warning to us. Let it be the warning: Click To Tweet

Beware Of The Triggers

Triggers include: Basically , if you can imagine it, its probably in this book. If you’re sensitive, you’re very likely to be triggered.

I can only think of one similar book – Red Azalea by Anchee Min, also a memoir of similar times in China. I read this one several years ago, but I remember the stories being incredibly similar, although coming from two totally different people. I would imagine that there are many such stories in China’s history. This memoir is also very, very recommended.

I thank Thistle Publishing for providing a free copy through NetGalley in exchange for an honest review. This has not affected my opinion.

Do you read autobiographies? And are you interested in the history of China, especially when it’s told by the everyday people, like you and me?