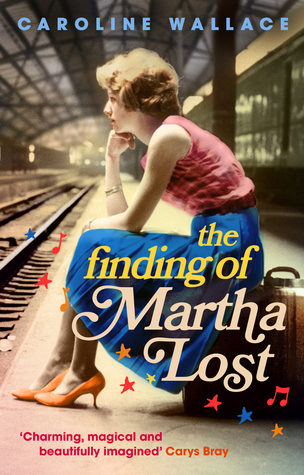 We need to talk about how I found myself feeling about The Finding of Martha Lost. Cause I for sure am not lost about how I feel about this book.

You could say I am finding myself with quite a strong opinion.

This book had me hyped up about it ever since I got approved for it on NetGalley. It offered a wonderful premise: Martha was found in an abandoned suitcase in a train station, grew up there, and needs to find out who she is, as time is pressing. Secrets, trains and unicorns.

Okay, maybe not the unicorns so much.

And it makes me sad I didn’t like it!
I super duper guilt tripped myself for not liking it SO MANY TIMES!!

I mean. Being a book worm, HOW can you not like the thought of secret libraries? TRAINS? I do feel like a failed bookworm now…

However, I have to say. Martha, the main character, was just… too daft. Too crazy. Too silly. There is a big difference between being cute and naive, and just being… unrealistic. And it’s not just the main character. The choices everyone makes in this book… I struggle to find words for it. Let me present you with some examples.

Throughout the book, the main problem Martha has is that if she doesn’t procure certain documents concerning herself, she will be evicted.

So, the normal course of action here would be, probably, to go to a certain government office and apply for them.

Now, I do understand that Martha is 16, a little bit naive and constantly abused by her insane fanatically religious mother, but.

Writing posters and leaving them on the walls of the train station for a mysterious stranger to find does not seem like a solution?? You do not hope strangers who send you books will come up with your National Insurance number? You also do not just do nothing for 30 days or so and hope it will somehow resolve?? More than that! If it was just Martha… But it really wasn’t. Gonna just spoiler-tag this.

There are other things. I can get behind unicorns and fairytales, gosh, I read Ben Aaronovitch, but this… Martha can apparently close her eyes and see how the things she finds got lost? There are all these other things about her, like how she needs to drag a rock with herself when she leaves the station, cause at 16 years old she still thinks the station will crumble if she leaves, cause her mother told her a story when she was a kid?

That, and then there’s the guy who’s dressed like a Roman soldier. Okay, so later there is an explanation, but I’m all just like:

Now if you don’t get that GIF, it’s totally your fault.

So, I feel like a super old and boring person right now, but it’s just a NO. And believe me, I’m the one who’s most disappointed by this, this was supposed to be an awesome book! I am still going to give it 3 stars, cause I think it’s mostly me, and also because the ending was kind of sweet. But my bullshit meter is just beeping too loud.

Thank you to Transworld and Caroline Wallace for providing a copy for review in exchange to my honest opinion. Too bad the opinion wasn’t too good, huh 🙁

Have you read anything by Caroline Wallace? And how do you deal with naive MCs?

I so agree with you! My last book review was EXACTLY about naive vs unrealistic. This one had so much potential! SMH! underground libraries! You don’t mess up a topic like that you just DON’T smh!

Yeah, I was so disappointed. In the end, I decided it must have been me 😀 doesn’t change the fact that I didn’t like it though!

It’s such a shame that this book didn’t live up to expectations for you but we can’t all like every book we read. I have this on my TBR so I’m intrigued to see whether I enjoy it or if I feel the same as you. I hope the next book you read it one that you love.

Yeah, I’m also super curious to see what you think. Was it just me..?

That’s a shame this book didn’t work out for you. Reading your review though, I think I would have felt the exact same way because of the unrealistic things that happen throughout the story.

Yeah… I just don’t know if it’s magical realism, or not. It needs to make up its mind 😀

I’ve not read this author before. Too bad this one didn’t work for you. I hate when that happens.

Thanks! I was hoping you would 🙂

Great review, as always. I appreciate how thoughtful you are. It’s obvious that you gave this book one heck fo a chance! After all, you’re right, some of these elements are AWESOME. When characters are too stupid, naive, or ignorant to be able to progress the plot in any realistic or meaningful way, I check out. I need far more than plot, I need character development!

Thanks! To be honest, the plot wasn’t too good either 😀 oh well. Can’t like them all!

Very nice review! I hadn’t heard of this book but I do tend to want to slap characters when they are too naive, and shake some sense into them!

😀 you sum up the feeling so well!

You got that right! And I guess, in the end we can’t all like the same books, can we?

The underground library thing does sound pretty cool, but this sounds like… Idk the word. Like some books/movies are just kind of silly and unrealistic in a magical sort of way but without straight-up magic or supernaturals. But if it’s not done well, then yeah it would just be frustrating. And I don’t think this would be for me. I think I’d be annoyed by the MC’s word decisions too.

Yeah, it’s like it’s neither this nor that! It’s how it felt to me 🙂

Oh, I forgot to mention, your spoiler tag is so cool! I’ve never seen one like that.

I love that plugin as well. It’s a tiny little plugin, I got it from DeathByTsundoku! She uses it and recommended it to me 🙂

…Doesn’t sound like my kind of thing either, if I’m honest, and usually all it takes is a library and I’m in love. 🙁
Have you tried The Invisible Library series? I love it.

I have actually hated another book with a secret library. The Shadow of the Wind. Just wasn’t good :/
I think I might have heard of that series, I will check it out, thanks 🙂

It sounds like this one would make me tear my hair out… over the missed opportunities. I mean, the setting sounds great and who doesn’t love a book about a library? Well, you and me, apparently, if the story and characters don’t live up to the promise of the setting. Thank you for the warning; I don’t think this one is for me.

Yeah, it could have been so good! Just made me kind of sad at the wasted opportunity. Oh well, all books can’t be perfect 🙂

I was about to request this one a while ago but wasn’t sure about it so ended up not hitting the request button… now I’m glad, I see that I’m not missing out. Love the review and the gifs/pics <3