The Feed is a solid, well-written, but pretty traditional dystopian novel. Definitely recommended for dystopia fans! I expected something more ground-breaking from it, and maybe more powerful or adventure driven, but it’s more of a slice-of-life. However, I enjoyed this book, and I’ll try to give you my reasons why. 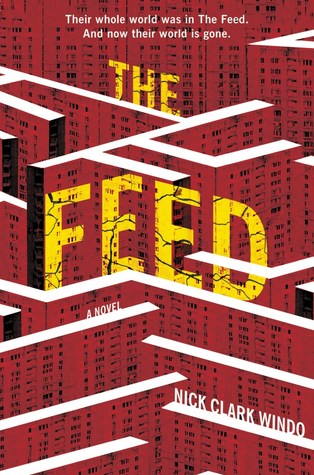 The Feed is sort of like our social media, except it’s ubiquitous. You can choose to be ‘unplugged’, but almost nobody does. The ones that do are considered outliers and activists, and that’s precisely what the main characters Tom and Kate are. Tom stands at the beginnings of The Feed – as the son of the man who started the project, he was the first child to be ‘enabled’ – without being asked, of course. The Feed isn’t that bad, except for the fact that it stops people from paying attention to the outside of their life, to the point where reading is not a needed ability anymore and isn’t even learned. When one day The Feed is hacked, chaos ensues. Suddenly, your mind could be invaded by anyone at all. The world winds down quite quickly, and everyone has to learn to live a simpler life. Not that that helps them find out who’s been invading their brains though…

While I enjoyed The Feed, my biggest problem was with the pace. Things didn’t really take off up till maybe 70% into the book, and I still wasn’t sure what I’m reading here – I mean, atmospheric tales are okay, I guess it’s more about the fact that I don’t read a lot of dystopias – so if I’m reading one, I’m expecting something to happen. It did, eventually, but in my opinion, it took too long.

Once the plot got moving, I appreciated its originality and the idea it is based on. It really is a good plot! Unline many other dystopian novels, this one is not based on constant violence and terror. Yes, there is violence, but the book really isn’t about that. In between short spurts of ‘happenings’, it’s more of a study of the characters’ inner realms, their feelings and wonderings. The main plot revolves about trying to find out what is happening to the people whose brains get ‘hacked’. Although this plot line isn’t so apparent till later in the book. I can’t give away too much, obviously for fear of spoilers, but I believe the story was uncovered in a nice way, and the whole setup was also smart and interesting. I was also deeply satisfied with the ending.

I really enjoyed the characters! They are written truly well, and you can tell them apart well – . The drama they are living through – lost children, not knowing what happened to your remote family, not having enough to eat or even knowledge to grow or forage for food – it’s all very realistic and well done. I enjoyed the slice-of-life part of The Feed.

Should I have to warn you about triggers in a dystopian novel..? Anything dystopian is bound to have scores of triggers. Although I find that this book is much less graphic than the rest, there is still violence, although most of it is perceived rather than described. Yes, you might get sad reading this book – it’s our possible future. And it’s a sad one. I believe that is meant to get us to think about what we’re doing to the world.

The Feed is a good book for the lover of slower, psychological dystopia – one that is not based on supernatural happenings or constant movement and adventure. It’s a study of a person’s feelings when something like this happens, and it’s also a study of the direction our world might be taking. Despite being somewhat slow paced, it has a very satisfying ending and poses a lot of good questions to ponder about.

I feel like this book is a lot like Station Eleven, which was also a sort of intellectualist-dystopia, although possibly more high-brow than The Feed. The pace and feel is quite similar though, so if you enjoyed it, I think you will enjoy The Feed as well. Children of the Different is also a similar story, but in a different way than Station Eleven. It focuses more on movement, pace and adventure, but somehow, the feel is quite similar.

I thank William Morrow for giving me a free copy of the book in exchange to my honest opinion. You can buy the book here at Book Depository and buying using this link supports the blog.

Have you read The Feed? And do you like slow-burn dystopian Novels?