I was so excited to write a review for this one! The Swish of the Curtain is strangely both as relevant as ever, and slightly dated at the same time. But it’s a wonderful read! First released in 1941, it talks about timeless things such as ambition, talent and… your parents not letting you do what you want with your life. Then again, something that has been written back when my grandmother was born has to be dated in some ways too, and they’re not surprising. But let’s talk about good things first!

If I had to place this book, I would say it’s somehow both middle grade and YA. I think that’s got a lot to do with the fact that children’s age was understood very differently back then, and they had freedom where we don’t right now (like walking around alone and doing whatever you want with your time), but also didn’t where we assume we will have freedom now (pursuing a career we want, for example). All of these things that have changed or, on the contrary, stayed the same, are interesting to compare with today’s times. And the main messages stay the same! 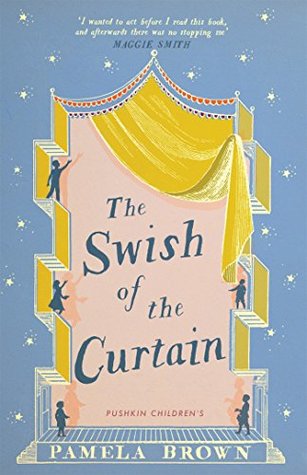 It all starts with a few new kids on the block – a group of seven new friends, some accidental mischief, and a great idea of starting up a theatre for the holidays. Of course, all of the adults of skeptical, “let the kids play their games” – which is why they don’t expect the kids to be able to actually give a good performance. But they do! And they keep doing it again and again. Because these kids will do anything to have a future in the theatre. Even if their parents don’t agree to it.

So The Swish of the Curtain talks about a bunch of kids and teens with some artistic ambition, and that’s why I say its both middle grade and YA. It represents quite a few age groups. However, what I think is very relevant is how it shows these kids to have some incredible direction – they do everything themselves and manage it all so well! This is rare in today’s world, because a few generations later, the school system has taught us to be shepherded and not think so much for ourselves. It’s truly empowering seeing these kids and teens do things so well and be appreciated by others – adults no less, while their families harbor not even a thread of belief in them at first. The fact that kids could write plays, act and run their own theatre? Unimaginable, right? And yet, when you see them not only manage it, but excell at it, you feel so inspired.

A GIF of a standing ovation in a theatre

Kids And Teens With Direction And Ambition

What I also liked in The Swish of the Curtain was that all the kids, or at least the older ones, were presented in the light of thinking about their future, what they want and how to pursue their ambitions. The book was very YA in this regard, and that’s why I think it’s a good story, despite she dated drawbacks. These kids are fighting for their own decisions and their dreams, and they have to convince their parents that a safe and boring career is not what they’re looking for. I don’t know if this is a problem many teens still face today, but even if they don’t, the topic of going forward to reach your dreams and figuring out your direction is a great one.

First released in 1941, The Swish of the Curtain talks about timeless things such as ambition, talent and... your parents not letting you do what you want with your life: Click To Tweet

The Realities Of The Theatre

Another thing that I really liked about The Swish of the Curtain is that it paints the theatre realistically – it’s not all roses. It’s quite hard, even exhausting both mentally and physically, and there is a lot of work involved. A lot of backstage work as well as acting! The story doesn’t just talk about the gleam of being on stage – it doesn’t forget the ones who design and make the costumes, or how much that costs. It also doesn’t forget that someone needs to take care of the curtain or give five minute stage calls. Someone also needs to write and produce, and even understudy or prompt lines – all things a kid dreaming of a career in acting who’s never been in any drama club might not have thought of.

The Swish of the Curtain is a wonderful read for anyone who does drama at school – it shows the backstage world without illusion. But it also shows how much fun it can be! Click To Tweet

I also found it incredibly refreshing to read and compare the kids of the 1940’s with the kids of today (well, I can’t speak for the current generation, but I figure they won’t be that far off from mine, with the exception of also being really tech savvy.) The kids in The Swish of the Curtain redecorate an entire building! They change windows, fix chairs, they PAINT THE ROOF. On a ladder and all. Unimaginable today, eh? Now, we dress our kids in reflective vests for basically going to the school bathroom. there would absolutely be no talk of kids repairing a dilapinated building, on their own, with actual tools. Pointy and heavy ones. And while I understand the need for safety, I also can’t resist the charm of these children who not only can stand on their heads or do cartwheels, but can also apparently fix up a house (none of these are things I could do myself at any point of my life either!) Yeah, there will be kids who can do some of these things, but it’s definitely NOT the norm. Incredible to read about. That’s how I feel about them:

Then Again, Some Stuff Is Dated… And Not In A Good Way

Okay, so we’ve talked about the good things. Now its time to talk about what’s dated. Well, you’ll find no body positivity in this book for sure. I was sad at how one of the characters, Maddy, was constantly put down by everyone for being “plump”. Her parents, her friends, her teachers. It’s to the point where her ability to act is doubted because of her figure, and she’s only ever given side acts (athough admittedly, not just because she’s plump, but also because she’s the youngest and not taken seriously at all). It made me really sad, although I guess I can see how it’s in the book, it being written in the 1940’s. However, there’s more to Maddy as a character – and the reason I am still giving this book 4 stars is because this theme is abandoned in the next books, and Maddy is given some pretty badass parts that kick the butts of all of her friends. So I think that these remarks were mostly there to accentuate Maddy’s character arc in the coming book, which is actually called Maddy Alone. Then again, you can’t deny that outlook is incredibly dated and harmful.

Another thing that I have to mention that was dated (and really weird!) is that the boys seem to smoke and that’s just okay, despite them being, what, 14? Apparently that was accetable back then?? So if you buy this book for your kids (which I can still recommend you to do), just let them know that people back then didn’t know how cigarettes were bad for you, so they should most definitely NOT follow their example of smoking.

All in all though, considering this book was written when my grandmother was born, I’d say it has surprisingly little in it that could be seen as problematic.

I thank the publisher for giving me a free e-copy of the book through Edelweiss in exchange to my honest opinion. Receiving the book for free does not affect my opinion.

Not many triggers in this book. About the only thing I can mention is the way Maddy’s figure is talked about, but I’ve already talked about that above. If your child feels bad about their weight, maybe skip this book because it might trigger them.

About the only one I can think of is Dodie Smith’s The Town in Bloom. It’s not a kids book – it’s more or less a… young adult or even new adult book, but it was also written in the early 20th century, and it also has an exceptional amount of information about the theatre and its inner workings. I can absolutely recommend it!

Have you read any other young adult / middle grade books that have been published a while ago? Are they still relevant today, or have they become completely dated? Do you think you or your kids could still enjoy them like I enjoyed this one?