At first I was reluctant to request Sugar Money because I’m a weakling at handling slavery stories sometimes. I turn into a puddle of sobs. But, despite being quite detailed about the hardships of slave life in 1765, it was a very engaging read. It doesn’t have a very happy ending, as you might surmise, but it tells a story worth hearing, told very soberly and matter-of-factly. 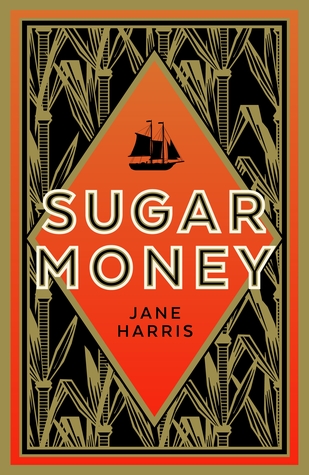 Two slave brothers, Emile and Lucien, are charged with a daring mission – their owners, French monks who keep a hospital, have no money to reclaim the slaves that were lost during the English invasion of some years back, so they want Emile to talk the slaves into escaping. As if it’s an easy feat, the brothers have to sneak onto an island where nobody is allowed to speak their language anymore and pull of a stunt to get all the slaves – able bodied or not – across half the island to a ship to escape. This is the story of how this goes, and it’s one based on true historical events.

The Story Is Very Soberly Told

Despite being a slavery story, it doesn’t contain a lot of drama. Pain, suffering and despair are usually the things that destroy me in slavery stories – but in this book, it’s all told so soberly. In the end, it makes sense that even though life is pretty damn horrifying, those people would not be alive if they didn’t learn to live with it – the human spirit doesn’t fare well, unless it adjusts. A person can’t keep reacting to horror dramatically. I felt like it made the story extra believable – it being told like that. The story is also told through Lucien’s point of view, and he is a young teen when the events take place. I feel like telling it that way really works well for a male character’s point of view as well.

I was listening to this book on text to speech, and actually, as I was going, I had to pretty much max out the speed – so I could just find out what happens. The story really does keep you on edge, when things start rolling! At times, it was even a little bit much. But definitely in an enjoyable way – I could just not put it down.

Not Dramatic, But Definitely Emotional

Despite not containing a lot of drama, like I said earlier, there’s still emotion. The author has walked a whole ‘nother mile, creating backstories to Sugar Money. The stories of why the slaves are where they are. Of why the main characters have these memories, these feelings. Of who they grew up with, who they fell in love with, and… lost. All of these paint a really engrossing image of the community and life for these people. It will also tug at your heartstrings for sure. I really loved the backstory of Emile and Celeste. It also gave me all the #FEELS.

It’s Kind Of Between Fiction And Nonfiction

If you’re a nonfiction fan, I think you would really enjoy this story. It’s definitely still fiction – but it’s based on true events and it doesn’t feel like the story strays too far from them. You can truly feel the research the author has done, and all the settings are painted in good detail. The sober tone that I’ve mentioned before really does give it a feel of reading a history book, but not a dry one at all. It’s also an important topic to talk about, so I feel like the author has picked an amazing setting and historical event to write this based on. In the end, the point it makes is that even if a slave trusts their owner, it’s just an owner – and they will sell them out. Owning a slave and treating them well is not a merit – in the end, it’s still just owning a slave. And owning another person is not something a human being should do.

Well, obviously – it’s a slavery book. Expect rape, murder, torture, bodily harm and all that. I don’t feel like I need to go in more detail. It’s not told dramatically, but it’s told in detail (although no rape happpens, it’s just talked about as an event that took part in the past.)

I thank Arcade Publishing for giving me a free copy of the book in exchange to my honest opinion. Receiving the book for free does not affect my opinion. You can buy the book here at Book Depository and buying using this link supports the blog.

Have you read Heart Berries? Have you heard about it? What is some of the fiction or nonfiction literature you’ve read recently on the topic of any indigenous people and their experiences?