You guys (and gals, and enbies), this book was so good!!! I don’t even know where to start. When I accepted the review copy, something made me think the book would be much more lighthearted than it was. I didn’t expect Prepped to be so serious and kind of heart-breaking. I thought it would be an adventure, but it’s so emotional and so much bigger than just an adventure!

Prepped is about growing up, making tough choices and realizing that a better life is possible for you, just maybe – if you are willing to fight for it. It also made me wonder about how tough some people have it, when growing up – without anyone around them the wiser about how broken the families might be. It’s also about fanaticism, taken to the extreme, and it catches you unawares – throughout the whole book, you’re struggling to believe this could be someone’s reality. 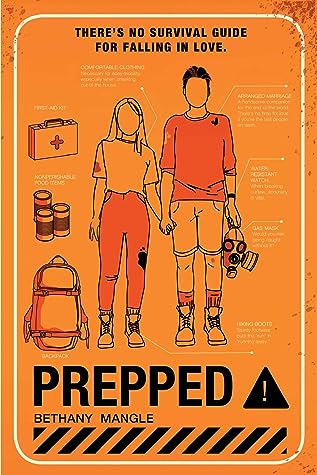 Check out on Goodreads
★★★★★ 5 stars
How I read this:
free ebook copy from publicist

Becca Aldaine has grown up in a family, in fact, in a neighbourhood of Doomsday preppers. They’re not religious – at least, not in that sense. But they do religiously believe that they must be ready for anything, be it a nuclear winter or a third world war, and they will do anything to ensure they will survive. ‘Anything’ includes all sorts of practice scenarios which may actually be more dangerous than the accidents themselves threaten to be.

Which is why Becca can’t wait till she’s 18 and can somehow get away from this nutcase community. But she’s worried about her little sister. And then there’s Roy… Her arranged-marriage boyfriend, whom she’s always seen as another nutcase, just as everyone else she’s always known. But maybe Becca doesn’t know the whole truth about Roy. And the coming months will ask everything of her – in order to prove how much she really wants to be free.

So as I said at the start, I didn’t expect this book to drop you straight into tough topics like that, but it does. You start off with Becca’s quite light-hearted bantery tone, but… The things that are happening scare you straight off the bat. The book starts off with kids and teens being shoved into a freezing lake and their near-death by hypothermia being treated as ‘nothing out of the ordinary‘.

And it’s this whole contrast that did it for me. The bantery tone, and yet – serious problems at home that you become aware of just gradually. Made me think, I wonder how many families had trouble, and I never even suspected? Many people cover the truth. So did the main character in this book, as a child – lying to social workers who came to ‘snoop’, because she thought her parents really did want the best for her and it’s the government who’s evil. 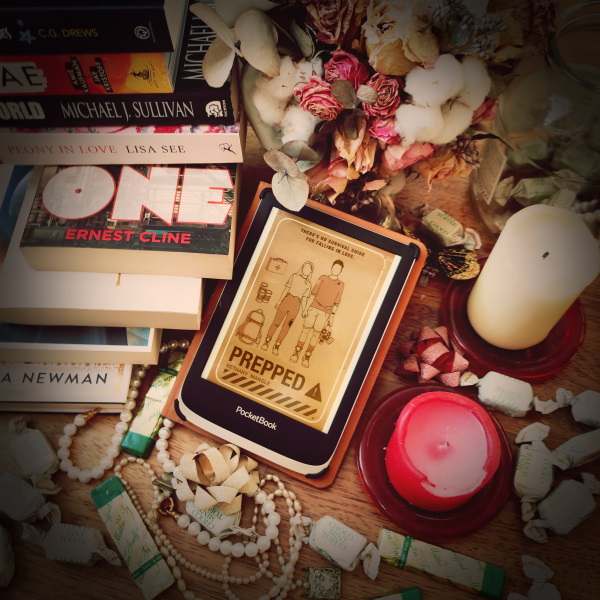 An image of the cover of Prepped, on a PocketBook Color e-reader, with books and candles around it; Photo by AvalinahsBooks

But at 17, Becca’s belief in her family’s innocence and kindness is long gone. With every memory and every little detail that she recounts, you get chills down your spine. The way this family runs uncovers itself slowly, and you get more and more worried about the characters as you go – the lighthearted tone shattering in front of your eyes. That was kind of an eye-opener for me, and it really got me into the book so that I couldn’t stop reading.

Prepped was a real eye-opener for me – some abusive families are so good at pretending to be normal, you don't even know what's going on. This YA is definitely worth a read: Click To Tweet

I didn’t really expect romance in this one! But it was very sweet and adorable. Roy, Becca’s arranged-husband-to-be is a darling from the very start. You can tell he is not the way Becca sees him – having known him from an early age and having been shoved into the relationship without being asked whether she wanted it or not, Becca’s always treated Roy with tolerance at best. Especially when he’s always seemed so keen to do all the trainings and otherwise seemed like the perfect Prepper kid. Becca thinks Roy basically has no soul or brain, but she couldn’t be farther from the truth.

I loved Roy’s character instantly. The way he cares for Becca – in ways she doesn’t even notice – is endearing. I always say I don’t have book boyfriends – but if I did, it would be Roy. He’s the sweetest, softest character ever, but he’s also capable of dealing with tough situations and he’s smart. He felt like the perfect YA love interest for me. 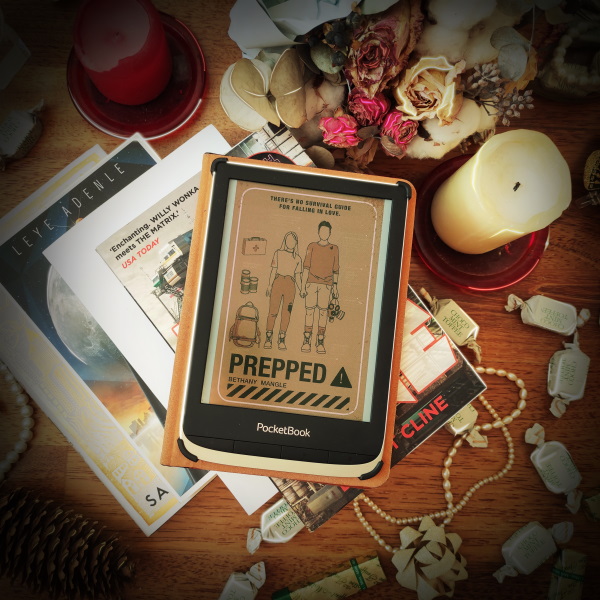 An image of the cover of Prepped, on a PocketBook Color e-reader, with books and candles around it; Photo by AvalinahsBooks

And it was also adorable to see how Becca slowly starts recognizing him for who he truly is! This romance isn’t the typical, sweet romance – the things happening in the book are sad and complicated, so there’s no room for a “sweeping off your feet” kind of thing. But romance in tough circumstances is always interesting to read – at least for me. That’s why I enjoyed it.

The Story Had A Lot Going On

Before writing my review, I glanced at some others and noticed that someone said the story had too much and was trying to be too many things at once – a romance, a coming of age, a thriller and maybe some more things.

But the weird thing is that for me, that’s what did it – that’s why I liked it so much. It WAS so many things!

I don’t agree with that particular reviewer that a book should be about one thing only – at least, this book. And while I respect their opinion (a reviewer is entitled to their opinion, whatever it may be), I think that life itself is never as simple as a “one topic thing”. Often when we experience romance on one side, we are struggling with work, school or family troubles on the other. Very rarely is our life only “about one thing”.

That’s why I liked this story – it was SO MUCH of everything. Yes, they fell in love – yes, they had to fight for their right to live as they wanted to live. Yes, they had to risk things and give some things up. But that’s life! If anything, I am surprised the author has managed to cram so many things into one story, AND do it well.

So it is like they say – indeed, what’s 2 stars for one person, can be 5 stars for another, and for exactly the same reason!

Prepped is about so many things – abusive households, fanaticism – but also love, caring for others, fighting for your future. The story is a whirlwind: Click To Tweet

I wish I could write a better review for this book – cause it was amazing and it deserves it. But all I have is this bundle of emotion in my heart after finishing it, and I can’t translate it into words! It was so MUCH, and it was about so many things – abusive households, fanaticism, people not caring – but also love, caring for your close ones, fighting for your future, belief in the decency of others. I don’t know how to put it into words, but this book is definitely worth a read, and all I know is that when I finished the last page, I looked up and said “WOW”. And that’s why I think you should read it too.

Prepped is about growing up, making tough choices and realizing that a better life is possible for you, just maybe – if you are willing to fight for it. ★★★★★ 5 stars: Click To Tweet