What an incredibly strange, and yet interesting, artistic thing I’ve just read. I have no idea how I should review it now, even. It’s a graphic novel called Metropolis by G.B. Royer, but it’s also so much more than just a graphic novel. And it was a pretty interesting coincidence for me as well. Let me give you more detail.

Ages ago, when I was still a teen, I remember trying to get some friends to come over to my house for a silent movie watching evening. Silent movies are now in the public domain, so you can just find them and watch them – and so my plan was to watch Fritz Lang’s Metropolis and the Trip of the Moon. (Yep, I was that sort of teen. I was either trying to be intellectual or maybe even actually was – I don’t even know anymore. It’s funny remembering it.)

A trailer of the restored version of Metropolis

But somehow the party didn’t pan out. I don’t know, I wasn’t too popular! (Kind of comes with being an intellectual / or trying to be / an intellectual teen…) And in the end, I never got to watch the movie. (I did watch the Trip to the Moon and it was lovely.) But Metropolis is still sitting somewhere on my old laptop I’m sure!

Anyway, it’s just one of those things you were “always gonna do”, but never did.

So imagine my surprise when I received three graphic novels based on this movie. I thought, wow, so I’m finally going to know what happens! And maybe I’ll even watch the movie. Talk about a nudge.

So let me tell you what I thought about the graphic novels. 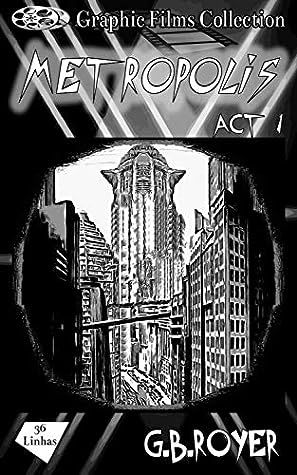 Check out on Goodreads
★★★★☆ 4 stars
How I read this:
free review copy from publisher

Metropolis shows us a dystopian future which is much like a lot of the stories we still write and read today. It’s a futuristic city where the economy is driven by the suffering of the poor, and the rich live lives of comfort and abundance (think about almost any dystopian YA novel of the past decade or two and this will be it!)

However, one day the son of the wealthy city master learns how the other half lives, and being a kind, sensitive soul, he strives to make way for change. However, his father has a different opinion on things. And he also has a mad scientist friend who may just be able to offer a solution… in the form of a, *gasp*, robotic woman! (I know!)

So events escalate, and the fate of the city, as well as the main characters, unfolds in a dramatic manner very fast.

Metropolis is a classic story that we still understand today, but it is also presented in a form we don’t really consume anymore. Which was why it was such a different, interesting read. It’s certainly nothing like anything I’ve ever read! Silent film is a strange medium, unfamiliar to us now. I’m sure I would probably have some trouble watching the movie itself, but after reading this? I definitely want to. Because this graphic novel somehow has the feel of a silent movie? 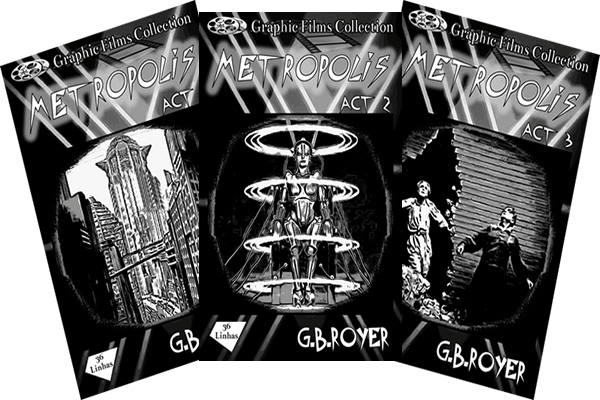 An image of the three covers of Metropolis side by side

The way the story is presented is certainly similar to a silent movie. The text acts as commentary, not like we would use it now in movies or graphic novels, really. The art style presents the panels as if they were frames, sometimes they will look a lot like one another, so it really does feel like I’m looking at stop frames.

The drawing style itself is very interesting too. It certainly breathes the feel of a silent movie – especially the make up that is so very specific to that time. The artist has clearly put a lot of effort into studying the style and feel of the movie sets and imagery because there’s so much feeling in these drawings. 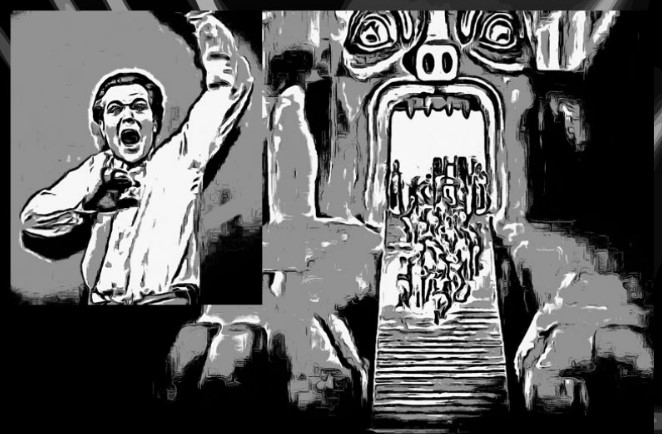 One of the scenes in Metropolis, Act 1 (copyright belongs to the publisher, 36Linhas)

About the story itself – it’s fascinating how it seems still absolutely current. Something that was written pretty much a hundred years ago, and yet it’s the same dystopian story we still tell today. You think the world changed, but did it really?

There is still so much in common between us and the people of some three generations ago. We fear the same things. We imagine the same pitfalls. It’s plainly fascinating to see these touchpoints.

The story of a person from a rich, unencumbered background, coming face to face with the bare reality of ‘the other half’ is still a story we tell. And it’s still just as relevant as it was a hundred years ago.

To put it closer to the media we’re consuming right now – this is the same kind of story most of us as reexperiencing right now through the Final Fantasy 7 remake – a grand city with big people who will not bat an eye at the struggle of the ones who keep the city up and running. I know we are playing it in our household at the moment – so seeing both these stories at the same time, yet from wildly different times of creation of the media – was fascinating for me and it drew a lot of parallels.

Almost 100 years later, and yet we still tell the same #dystopian stories... Check out Metropolis, a graphic novel based on a silent movie from 1927: Click To Tweet

The other thing I found quite fascinating is how the storytelling in this story is so wildly different from what we’re used to right now. It’s like words are secondary – most of everything is told through emotion, expression and especially lighting. For this, I specifically have to watch the movie – silent movie makers seemed to have been the masters of dramatic lighting.

The emotion that certain angles of light express in these panels was nothing short of stunning. With media these days, what you have to do is just gloss over what’s going on. But with Metropolis, you have to pause at each page and try to interpret what was meant because few words are used to explain it in verbal terms. I can only assume this must come through even stronger in the movie. 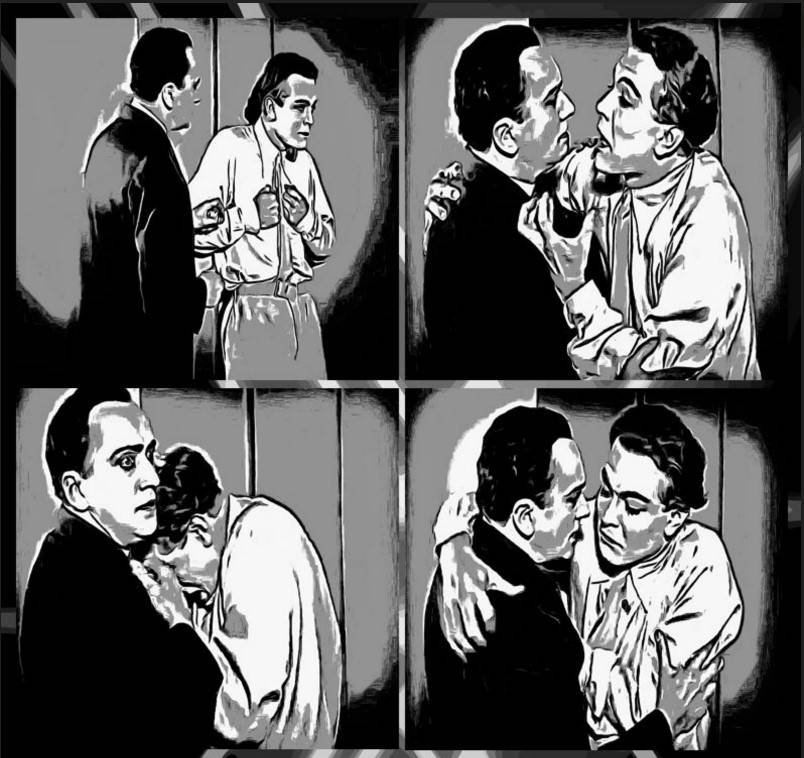 One of the scenes from Metropolis that really moved me – you can see all of the emotion and the words are not needed at all
(copyright belongs to the publisher, 36Linhas)

I found the characters of Metropolis to be stunning, emotional and very well fleshed out despite the lack of the medium – no descriptions, no color, not even movement – and yet, they were so full of life. I especially loved the main character, the tyrant’s son – he exudes feeling and virtue. I can’t help but be completely fascinated by the talent of the lead actor, Gustav Fröhlich, whose expressions upon finding out the hard truths of his life and his privilege were truly carrying the emotions through. I must also mention that the artist did an amazing job capturing them and transfering them on paper.

How has storytelling changed in the past 100 years? Do we consume stories differently now? Read this graphic novel based on a silent movie and you'll be able to see it for yourself: Click To Tweet

Despite being a quick read, it was very emotional. It was interesting to read something that challenged the way I am used to perceiving and understanding stories. I came away from reading the graphic novel Metropolis with an urge to watch the movie as well. I hope I can get to do it soon! It was certainly very deeply moving and very different to any kind of media I have experienced in a long time.

Have you ever read a story where words don't really matter? Check out Metropolis, a graphic novel based on a silent movie of the same name, filmed in 1927: Click To Tweet

There’s just one thing I have to mention about this graphic novel – the English translation of these books could be much better. From what I gather, they were originally released in Spanish or Portuguese, so it’s a translation into English. It didn’t prevent me from understanding what was going on, but it certainly could benefit from being proofread by a native speaker because I found some grammatical errors while reading. However, even though there are shortcomings in translation, there is very little text in the graphic novel and it focuses on the images and the emotion, so it really does not change the whole feel of the work that much – it’s still worth giving it a go for sure.

I thank the publisher for giving me a free copy of the ebooks in exchange to my honest review. This has not affected my opinion.

Have you read anything like this yourself? And have you seen any silent movies? If you have, tell me what you thought!