Have you ever wondered what it would be like to write a book with someone else? I know I have.

And now that I think about it, I’m not so sure why I’ve always thought of that as mind-blowingly complicated – after all, many of us work in teams. A lot of the work we do is divided between individuals, and somehow we manage.

And yet… writing a book is such a, I don’t know… personal kind of act? How do you manage teamwork around that? How do you divide coming up with ideas? How do you literally put two brains together? I know I’ve always wondered. And today I actually have a chance to ask!

Meet Caedis Knight – the author of the paranormal romance series Blood Web Chronicles. Or rather, meet NJ Simmonds and Jacqueline Silvester, the two authors who wrote these books TOGETHER. And today, I’m going to ask them all the questions about co-writing I’ve ever had. So let’s start! 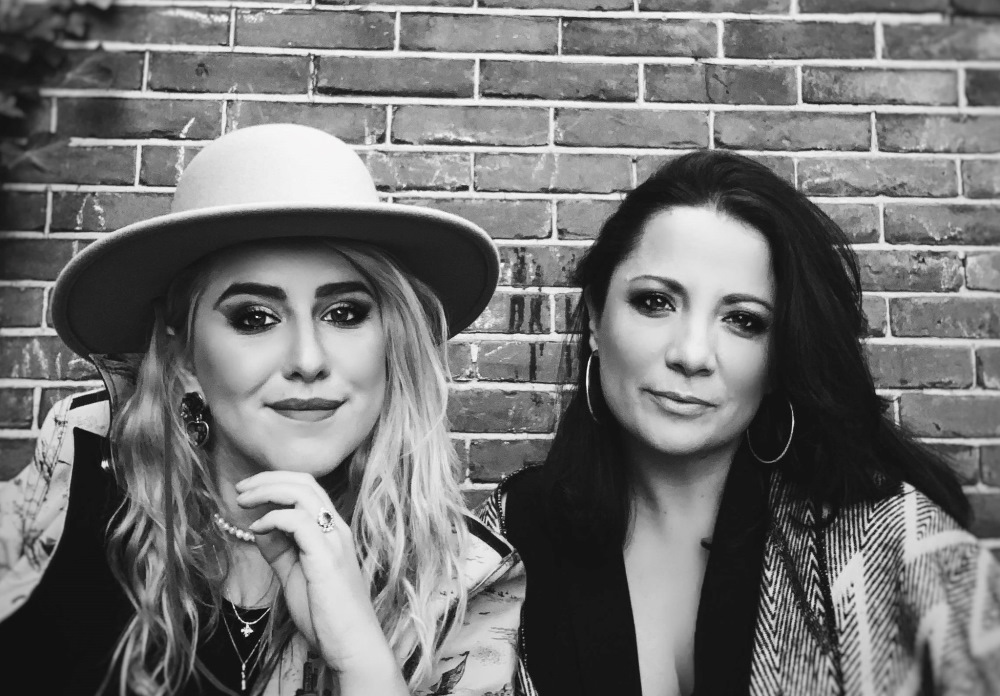 Welcome NJ and Jacqueline, I’m very happy to have you on my blog. Would you give me a few sentences each about you and your work to help my readers get to know you better? What kind of books do you write, individually?

NJ Simmonds: Hi! I write fantasy, and my Indigo Chronicles trilogy is made up of The Path Keeper, Son of Secrets and Children of Shadows. I also write manga. All my work involves complex women, gritty urban settings, a nod to my Spanish heritage, and plenty of magic. When I’m not writing I lecture on Storytelling (rebel-story.com)

Jacqueline Silvester: Like Natali, I also write fantasy… although for more of a YA audience, as well as being a script doctor. My background is animation, and my trilogy is called Wunderkids. I’m also working on a couple of contemporary YA and my first MG.

I would also like to hear more about Caedis Knight. From what I’ve heard about your series and your author persona so far, it’s almost a third person! What’s the vibe of the series you are writing together? And I would also love to hear how you came up with the pen name – is it special in any way?

NJS: Caedis is kind of her own person as we are both very different writers, but when combined our style becomes a third voice. Caedis is our much cheekier, darker, no-holds-barred persona.

JS: We wanted a very paranormal romance pen name, so came up with one based on the Latin word Caedes which means ‘stabbing, beating, cutting, murder’. Our books are all about the paranormal crime underworld. And Knight worked well with it because our MC is somewhat a reluctant hero… and it sounds like ‘night’. 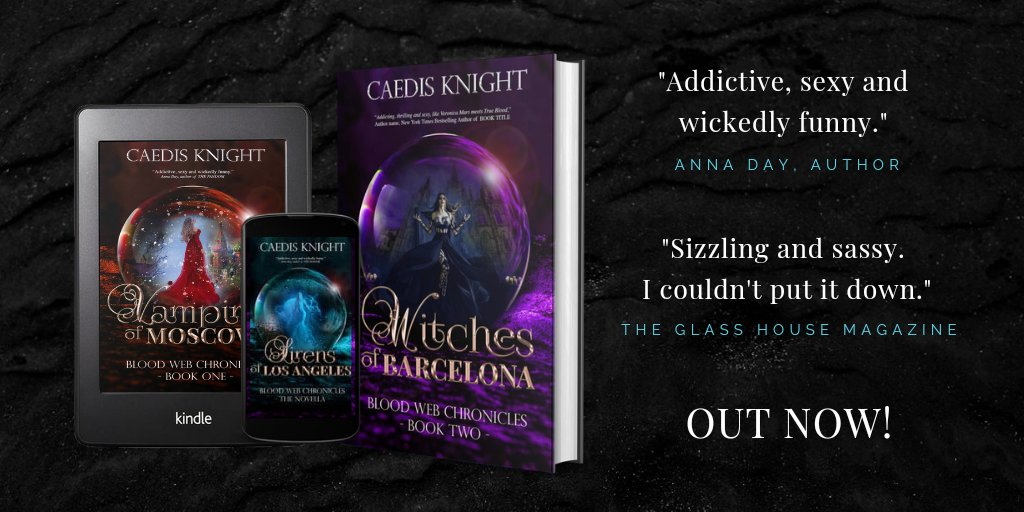 An image of the latest series by Caedis Knight, the covers of all three books and review snippets: “Addictive, sexy and wickedly funny” by Anna Day, and “Sizzling and sassy, I couldn’t put i down.” by The Glass House magazine

Let’s dive into the writing though. I’ve always wondered about the process of co-writing books. I’m not an author myself, so I’m not greatly familiar with the process of writing a book alone – but is writing with another person very different from it, or is it kind of similar? What’s your process together and how does it differ from how each of you write your own individual books?

NJS: We’ve had to adapt two very different writing styles to comfortably work together. I am a huge planner, Jacky tends to get plot ideas as we go along.

JS: And Natali writes in a lot of detail from the beginning, whereas I’m more sparse and add the detail later.

NJS: So in order to work successfully together we do a lot of groundwork first. Shared world lore files, Pinterest accounts, daily communication, long meetings, character sheets, chapter by chapter breakdowns, and beat sheets all before we start writing. Luckily we are the best of friends, so we love chatting!

JS: And once we start writing we pass the document back and forth, writing a chapter each and editing one another’s work.

Sounds like fun, actually! Do you have any specific tasks that you have divided between yourselves? Like, does one of you handle a specific task that the other one doesn’t? What are these tasks?

NJS: We’ve been writing together since Oct 2019, so over time we’ve learned to work to our strengths. My background is marketing, sales, art direction – Jacky is more tech-savvy, amazing at film, and also great as design. She created our gorgeous book trailers and covers…

JS: And Natali designed our website, newsletters, manages most of our social media, plus the PR side of things.

NJS: Between us we cover almost everything. And writing-wise, I like description, action and tension, and Jacky is really good at humour, deep characterisation and tight plotting.

What about planning out the story? Do you come up with your ideas separately and rehash them together, or do you have ‘jam sessions’ with snacks and margaritas or something like that and come up with the plans together?

NJS: We literally don’t go a day without discussing the series. We knew from the beginning we would have 6 books and 3 novellas, also the entire story of Saskia looking for her sister spans the entire series – but then each book has its own plot and can be read as a standalone. Jacky invented the initial world…

JS: Well, it was my idea to write the series together and I already had a rough idea of themes and characters. But Natali suggested we only write about the cities we’ve lived in as between us we’ve lived in eight countries and speak five languages fluently. Then with each book we build the plots up bit by bit, sharing photos, vibes, funny ideas.

NJS: Although if we’ve lived in that book’s city we have a bigger input. My family is from Barcelona so I came up with a lot of WITCHES OF BARCELONA setting ideas, and likewise Jacky has lived in Moscow and LA so a lot of the first novella and VAMPIRES OF MOSCOW was her.

How often do you check in with each other when you write? And what’s the way you do it usually?

JS: More than once a day

NJS: We mainly FB chat or call on the phone

Has there ever been any point when you thought, “well, this isn’t working?” How easy is it for you to figure out inevitable differences in ideas in your creative processes? Because I would imagine that with any team, there will be differences of opinion from time to time. And if there are, how do you decide which way you’re going to go?

JS: Neither of us is sensitive to anything the other thinks or says. We often re-write chapters the other has written, and it’s always for the best.

NJS: We are both really respectful of one another’s ideas and rarely disagree. We both think the other is probably right anyway haha.

JS: At the end of the day having a peaceful working relationship is more important than what colour a character’s hair is.

NJS: It’s a bit like raising children, everything is a joint decision and we work to our strengths because ultimately we both care about the series as much as the other. We haven’t ever argued or really disagreed. In fact we are already discussing other series set in this world – so Caedis will be around for a long time to come.

Finally, let me ask you a little bit more about the series. What got you excited to work on this story and what are some of the most important themes and goals of what you’re telling the reader?

NJS: When Jacky asked me to co-write this series with her I was SO excited as I’ve always wanted to have the freedom to write sex-positive paranormal stories with a strong, yet flawed, female lead. Who doesn’t want to write about witches, werewolves, fae, vampires, sirens and shifters? Saskia is also bisexual and a witch, so the posibilities for relationships and adventure was endless. Coupled with each book taking place in a different (mainly) European city AND some really strong themes made this series so much more than just a fun project for me.

JS: It was also important to me to get STEM and tech in there. Saskia is an undercover reporter for a newspaper on the paranormal Blood Web (a hidden paranormal corner of our own dark web) – and through that she finds herself investigating different paranormal crimes that slowly lead her to her missing sister. We tackle plots involving big pharma, immigration, consent, childhood trauma, blockchain and crypto, sex workers, death and trafficking. Yet the books remain fun, light, wickedly funny and very steamy.

NJS: Writing sex scenes with a friend sounds awkward, but actually it’s the most fun ever. We are really big on featuring characters from all walks of life, a really diverse cast, and reflecting the immigrant lifestyle we have both experienced.

JS: I can’t believe how far the series has come since its release six months ago, actually. We already have two books out and one novella, plus another book and novella due out this year.

NJS: And we secured our own foreign rights agent who has got us a deal with Russia’s top publisher, AST. So we are over the moon that the series will be in bookshops over there too.

JS: We have other countries potentially interested, and talking to TV people, so who knows what will happen next?

NJS: Blood Web Chronicles is a gritty, fun, sexy series for those who love the fast-pace of YA but are looking for something a lot more adult to sink their teeth into. And judging by the feedback we are getting, it looks like that’s something readers are enjoying too!

This was an incredibly fun interview for me, and I hope it was for you too! If you are curious about the books these authors have written and co-written, I’ll leave some info right below!

You can also read The Indigo Chronicles from NJ Simmonds – I loved the series and you can read my latest review here.

And also check out the Wunderkids series by Jacqueline Silvester.

An image of the latest Wunderkids book, Wakefield manor, with a 5 star review: “An addictive, twisty, thrilling page-turner.”