Duckett and Dyer was the wackiest read ever!! It has funny, it has serious, and it even has a bigger plot coming for the next books. I am excited to read the next ones, I gotta say! If you’re looking for some fun evening reading, you should definitely pick this one up – it’s worth it. Especially if you’re a fan of the scifi comedy novel. 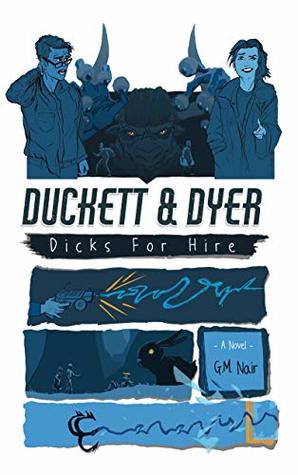 Check out on Goodreads
★★★★✬ 4.5 stars
How I read this:
book gifted by the author

Michael and Stephanie are two young people who aren’t quite making life work. Michael’s struggling to pay his and Stephanie’s rent, and Stephanie… Well, she’s not doing much of anything, really. Except for getting Mike in trouble. They’ve been friends since the dawn of time, but the friendship has been souring – at least for Michael. It reaches a breaking point for him when these weird people start showing up, asking him to investigate their cases because somehow, there’s an ad online about Michael and Stephanie’s PI agency! An ad nobody ever seems to have put up. Needless to say, the agency doesn’t even exist? Stephanie jumps into the affair headfast, and the only reason Mike decides to tag along is because his new crush seems to be in danger. So they embark on a quest that might make or break their already half-dead friendship and may or may not put them in a lot of danger. This is a story of how they unravel the mess.

What I loved about this book was how easily it read, how wacky it got and how witty it was!

I love G.M. Nair’s talent for putting the serious dialogue into the wacky parts as seamlessly as he did. It had just the right balance of fun and serious. The wackiness got a little confusing for me in parts, and I guess that’s where the half star went, but it may as well have been me as any other thing. I feel a little sad that I chose to read this book during a trip and then came back home as I was only halfway into it. When you come back from a vacation, a lot of hassle tends to manifest, and that’s exactly what happened to me. I didn’t manage to remain in the same frame of mind and had to abandon the book for a while, and coming back to it was tough. So I feel like maybe it’s just really unfortunate circumstances, because if I read it as one block, I would have enjoyed it so much more! (And forgotten less details!) So don’t let my missing half star judge for you. It really is a great story and I keep worrying that maybe I’m just not cutting it slack because of my own personal reasons, completely unrelated to the actual book. Ah, #bookbloggerproblems…

Anyway, the characters are quite interesting! Michael is too serious about life, and Stephanie is his exact opposite. She’s almost like a cartoon character – her behavior is ridiculous to an unrealistic degree. But as different and clashing as they are, they do make a good team… sort of. Because while Stephanie needs to be more responsible and less hyper, Michael also needs to open up his mind a little and ease up on the anxiety. As happy go lucky as Stephanie is, her own character does not prevent her from seeing the world as it is – even when it’s being ridiculously unrealistic. And it’s being way more than ridiculously unrealistic! (Hence the aforementioned ‘wacky’ part.) So at first you question the morality of what Stephanie and Michael are doing, but after a while you just… Stop. Because things are going head over heels and things are just too wild to follow. That’s when you start wondering where it will take you.

This book is a mixture of wacky and serious, sad and just way over the top and out there. It will talk about friendship, responsibility, anxiety and finding your place, but it will also have people with apple heads and giant bunny rabbits as horses. Exploding, for some of them.

It’ll have details of the wackiest things, like Dogpile being there instead of Google and a number of other things you would imagine yourself if someone asked you to come up with a weird alternate reality. But they’re all really fun and make for good, dynamic reading.

I really enjoyed Duckett & Dyer: Dicks For Hire by G.M. Nair. It’s fast paced, light-hearted, silly in all the right places and serious when it needs to be. I can’t wait for part 2!


Duckett & Dyer: Dicks For Hire by @GaneshNair could be your fun book of the year. It's fast paced, light-hearted, silly in all the right places and serious when it needs to be. ★★★★✬ 4.5 stars: Click To Tweet

I thank the author for gifting me a free copy of the ebook. This has not affected my opinion.

Have you read any fun books lately, especially scifi comedy? Anything you’d recommend?