I was very excited to read The Anomaly after I got the publisher’s invitation. There was promise of conspiracy, ancient secrets, danger and fright – anything ranging from Indiana Jones to Uncharted and all that. Exciting! I was kind of sad when at 40% of the book, nothing much had really happened, and when at 70% it just lost me. I guess it’s safe to say that the book was not quite for me, but I can also vouch for the fact that the wider public will love it. And let me tell you why. 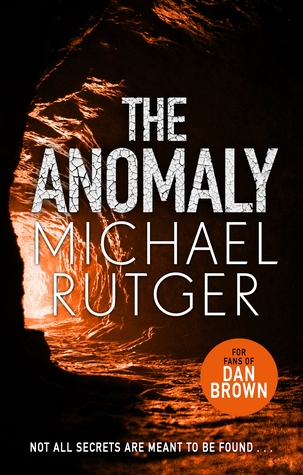 Nolan Moore is a Youtube conspiracy theorist, an Indiana Jones wannabe (sort of…) and is on track to finally be picked up by a cable TV as a program. But before he can, he must… finally find something to show. And he thinks he’s on track.

And he actually is. The Smithsonian is sitting on a big secret of a cavern in the Grand Canyon, insisting it doesn’t exist, although facts point otherwise. So Nolan and the team set out to find this cavern and uncover the truth about the world’s origins – and although they don’t really know what the secret is, they believe it will be world shattering.

It turns out, Nolan is onto something. But does he know what is really going on? And what will be the consequences of his little excursion, both for himself and his little team, and the world at large? Nolan doesn’t expect to find anything else than an archaeological site, but what he finds is much, much more dangerous.

So What’s Good About The Anomaly?

I have to agree that I was completely hooked on the promise of fight and adventure! I still believe that this story could have been delivered so much better, and not just in terms of how it was told, but the story and its details itself. Tell anyone this premise and they’ll tell you “this should be a movie, NOW”. That’s no coincidence – the author happens to be a screenwriter, and I actually wondered if he was before I read the acknowledgements, where it’s confirmed that he was. Unfortunately for The Anomaly, the fact that the author is a screenwriter didn’t make the book more cinematic – it somehow made it miss certain very integral parts of story telling on paper. I can’t point out exactly what it was – but I know that certain things would have worked perfectly on screen, but didn’t work so well on the page. I still maintain that the idea for the story is amazing. I just wish it was delivered better.

Continuing this theme, I must admit that the themes were great. Ancient civilizations, stone computers, mysterious creatures, crafted from relevant elements. Big organizations, trying to achieve dubious goals. And even your typical urban fantasy male lead who is struggling with a broken marriage and a cracked image of self, when he really isn’t that bad. All these things were great. And this is exactly why I think The Anomaly will still appeal to most occasional readers – which is actually something I’m already seeing, judging by all those great reviews on Goodreads. If you’re less picky, if you don’t read a lot, if you prefer movies to books – chances are you will find this very engaging, although maybe a little slow to develop.

So What Disappointed Me So Much?

Well, first of all, there was promise of fright. There are several blurbs for this book, and all of them talk about ‘a nightmare’, ‘a scare’, and the reviews rave on about how people were afraid to turn of the lights. Me while reading this book?

I truly and honestly did not get WHAT the promised scary part was. There was NOTHING scary about this book, legitimately. There was arguably only one scene that had the potential of being scary, but honestly – we’ve seen it all (we’ve seen it in 1980…) That’s not what scary is. Sure, they were trapped in a mysterious cave with dangerous artifacts and no way out, but… that’s just sad, that’s not scary. There was no dark presence. There was nothing evil at work. I have read kids books that are scarier than The Anomaly.

Another thing was the pace. Like I mentioned before, three quarters of the book in, and still nothing much was moving! I can see a lot of less patient readers just dropping it altogether. When things happened, they stopped happening several pages after they started, and never picked up. The book is largerly about people wandering dark cave corridors. And that’s it.

That would also be okay if there was a big secret and mythologies involved. But there barely is. Another thing that upset me about the story was the lack of smart, viable explanation. Things just happen and are a little too easy to explain, and very conveniently. Explanations are simplified: “for some reason it’s doing that.” At first an inexplicable catastrophe starts, and then it reverses itself just as inexplicably. I am gullible, but not this much. I understand that the characters don’t know squat about what’s going on, but please, have you watched Stargate or Doctor Who, or even the said Indiana Jones? For people to buy sciencey or magical mumbo jumbo, you need a lot of detail, and if the characters don’t know anything about it – they must at least try guessing and surmising. There have to be clues found. They can’t just go “well this happened. For some reason.” That does not make a compelling story. The Anomaly fell very short in this regard, as there were barely any explanations or theories on the whole ‘big thing’ that is happening.

And yet, despite all these shortcomings, the book was interesting to read and I didn’t want to drop it. That’s why I’m giving it three stars. It’s an interesting evening read, as long as you’re not looking for it to be ‘gripping and terrifying’, despite it claiming to be so.

I thank Bonnier Zaffre for giving me a free copy of the book in exchange to my honest opinion. Receiving the book for free does not affect my opinion. You can buy the book here at Book Depository and buying using this link supports the blog.

Have you read any good thrillers lately? What would you recommend me?