Today I’m happy to be part of The WriteReads blog tour for The Cousins by Karen McManus! I don’t often read thrillers, but when I do, I make a point to choose good ones. The Cousins was a good twisty mystery of sins done in the past and family grudges still running strong – it wasn’t one of those stories where you’re stressed or scared while reading it, which is a good thing – it’s more like a laid back, summer kind of read, but with a fast-paced and tense ending and quite a solid mystery. It’s definitely a good read! 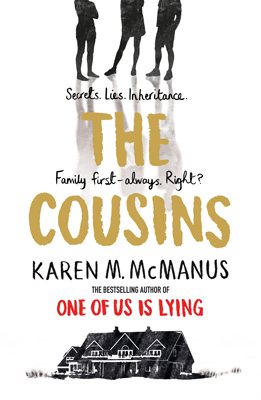 Goodreads
★★★★✰ 4 stars
How I read this:
free review copy for blog tour

The book starts with a riddle – four disowned children of a rich family, and an invitation to come work in the family resort over the summer issued to their three children. The invitation is as much of a mystery to everyone as the original disowning of the four Story siblings was at the time it happened.

The cousins don’t really know each other, but their parents will do almost anything to get back into the good graces of their mother, even if it’s more than 20 years later. So the teenagers are shunted off onto the island resort of the Story family, without knowing what to expect, and without really wanting to be there.

In fact, each of them has a good reason not to want to be there.

The story begins with a slight tension – because you are ever so angry at the grandmother on the behalf of the three cousins. Sure, maybe their parents DID do something to deserve this – but the kids never did anything apart from being born. How did their deserve their grandmother completely cutting them out of their lives, while she lives in incredible luxury? 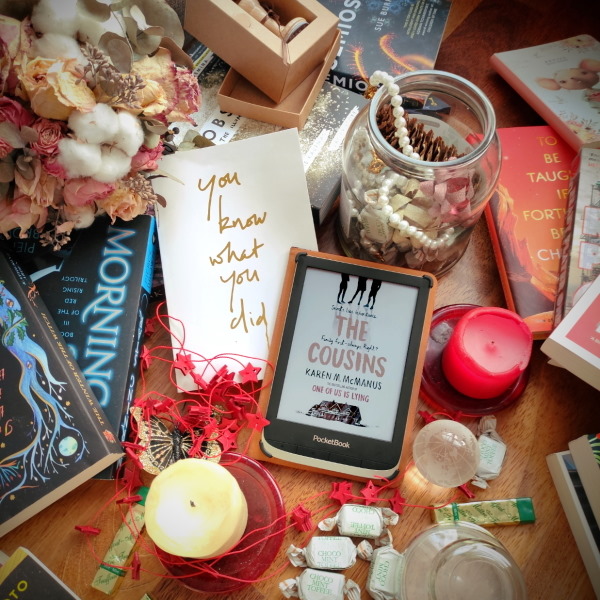 An image of a color PocketBook ereader screen, showing the cover of The Cousins by Karen McManus, propped up on a print ARC copy of the The Cousins, the cover just white with an “I know what you did” line running in gold; around there are other books, candles, sweets and other random things; photo by AvalinahsBooks

The first meeting with their grandmother took if out of me – what a cold, awful woman! But I couldn’t help wondering whether there was something else behind all this, because from very early on, the story hints at some old secrets. And as the story goes on, we learn that some of those secrets may even be dangerous – dangerous for all involved, even after all those years.

Why did the Story children get disinherited all those years ago? And why did their own children get invited back NOW? The summer when old secrets will come back: Click To Tweet

The Pace And Characters

The most prominent ones, of course, are the three cousins – Milly, Aubrey and Jonah. They are all likeable, but in wildly different ways. They came across as quite realistic people, and I could relate to something about each of them. I liked their back-stories as well. The way they grew up really does give you extra information about the wider history of the Story family, and the snippets of backstory we get about their parents are also integral to what’s going to happen.

You will like at least one, if not all of the characters of The Cousins – and along with it, you'll get a good mystery about family secrets: Click To Tweet

Anyway, after the book hits the middle point, it just gets rolling. I couldn’t get away from it after that point. The story takes off, gets a seriously darker and more dangerous tone, and developments happen quite fast. I would have perhaps liked the story more if the first part didn’t take so long, but it does wind up into quite a good thriller.

And I have to say, never in a million years did I see the book taking THAT turn. I don’t want to spoil it for you, but it was pretty good!! I mean, part of the whole deal with The Cousins is guessing where it’s gonna go and what really happened all those years back. My kudos to you if you actually guess it right!

Never in a million years did I see that twist coming – I'm talking about the one in The Cousins by Karen McManus: Click To Tweet

I only realized this after I finished the book, but I really liked the characters. The cousins are a trio made up of just the right kind of people – a girl who looks strict, self-sufficient and pretty much perfect on the outside, but very frail inside, another girl who doesn’t even truly know who she is, when she’s not trying to please others, and a regular seeming guy who is actually something of a softie inside. This makes for a good character dynamic, and I’d hate to spoil, but for some good twists as well. An image of the ARC of The Cousins, opened and put upside down so we can see both covers and the spine; around it are other books, flowers, candles and other stuff, along with a color PocketBook ereader screen, showing the cover of The Cousins by Karen McManus; photo by AvalinahsBooks

Although slow to start, this was a good thriller. I liked the characters, and the main story was quite wild in the end. About the only drawbacks I can think of is the slow start and somewhat lacking execution of the final reveal (I felt like I wished the parents’ personalities came through more than they did, maybe more time was devoted to their backstory). However, I really did like the ending, and after the midpoint, the book kept me racing through the pages. If you want a rather light, but definitely engrossing mystery about family secrets, this will be right for you!

Disinherited, cut off... Reinvited? A story about a summer when past secrets come back – The Cousins by Karen McManus: Click To Tweet 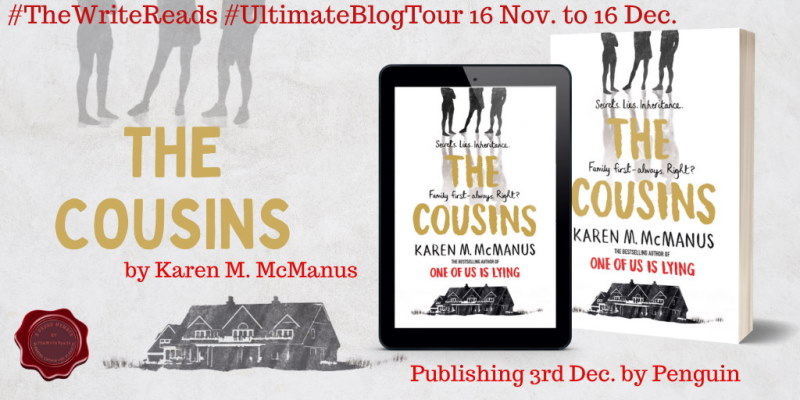