Sometimes we value things based on how much they cost us. We can’t really help it, it’s simply psychology, or maybe its societal. But that’s not always right, and it certainly wasn’t when it came to The Sundered. Because I got this book as a freebie or review copy before I even blogged, and let it sit unread on my Kindle for ages. But now I just sort of want to buy everything Ruthanne Reid has ever written. And that says something.

The Sundered completely got me. It’s genius. It’s unique, it’s about huge things. And it draws you in straight away. 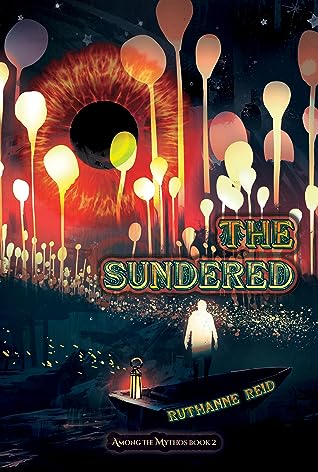 I was not even surprised when I looked at the reviews of other people after I finished the book and found that they felt the same too. The book is highly immersive and you can’t get your face out of it when you start. You expect a typical post-apocalyptic scenario, but it’s not. It’s not formulaic. It’s hard to predict, and it’s kind of combustible. But what’s especially relevant and present in most really revolutionary dystopian scenarios are the morally gray areas, and The Sundered is wonderful at this. If you thought you have it figured out though, you couldn’t be more wrong. This book will have you and it will drag you by the nose, and at the end you’ll appreciate it so much how it had you.

We are thrown into a world which has ended, and humans new coexist with these interesting part-human-like creatures. Naturally, humans belittle them and treat them as expendable slaves, because nobody else can have a real mind and soul, right? But it’s so easy to shove someone in a different category because they look, feel or think differently. Oldest trick in the book.

So the main character Harry binds a Sundered to his will. But it isn’t a typical specimen. Aekesh feels like he’s a king of men, a king of whatever he is. He is power, he is knowledge. He hints at a higher existence than plain old humanity. And yet… Why does he stay bound to good old Harry? Or is it Harry who accidentally got bound up in a game bigger than himself? Because, oh, I forgot to mention – Harry is searching for the Hope. Its a mythos of something that could save the world, and Harry’s family has been looking for it for generations. Harry might be closer to it than he thinks, but it might also change the world in different ways than he expected it to.

One of the main things in this story that I loved so much was how it completely didn’t center on Harry’s human team, and instead focused on his relationships with his Sundered. Sundered are sort of something between human and beast in this book, they come in different colors, sizes , and shapes and can look like anything. They’re thought of as expendable, inferior and unimportant. But for Harry, that is about to change, because he will get to see a taste of their true nature. As Harry’s relationship with his Sundered deepens, the one with his team weakens, until he finds himself in a world he can’t understand anymore, with every one of his viewpoints challenged. I really loved this process – showing the human how he was wrong and how conceited, short-sighted his people are. We do this as well, although we don’t have any Sundered. But we apply this to other humans – other races, cultures, tribes. We do this all the time. Which is why I liked it so much to see these flaws explored and challenged.

The Sundered by @RuthanneReid explores how short-sighted we humans are when it comes to other races, cultures, tribes. A really engrossing, ★★★★★ 5 star #dystopian #fantasy: Click To Tweet

I thank the publisher for giving me a free copy of the ebook through Story Cartel in exchange to my honest review. This has not affected my opinion.

The Sundered may be triggering. It’s a post-apocalyptic world where people struggle and non-human life isn’t valued and is treated as expendable. There will be violence and mass death. But most of the triggers are emotional rather than physical, so just emotional struggle for the most part, and

What’s the most recent book that surprised you like this? When you were expecting something simple, but instead got a really engrossing, dynamic story?