It’s hard to start the review for Stay and Fight. It’s one of those books you feel is not merely just a book, just a story. It’s so large it encompasses universes. Mindsets. Ideas. It’s so weird, but also so real, you’re simply sucked in. I was charmed and entranced by this book. My moods shifted along with the events in it. It was a journey. 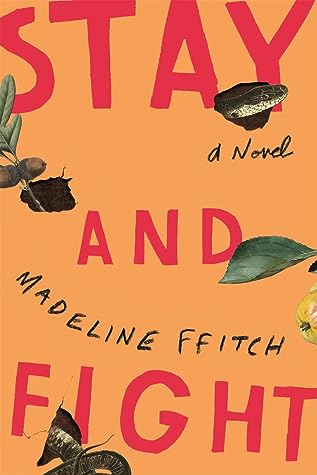 Helen is left with no place to call home after her boyfriend leaves her in the middle of the Appalanchian forest. Well, apart from the trailer. But Helen won’t leave – no, you don’t beat her down just like that. So she builds from what she’s got – misfits like her with no place to go – Karen, Lily and Rudy, crooked walls and ceilings, survival dice. It’s a ragtag kind of life, but it’s a life.

But the thing is… Living in a different way often upsets people. Proper people. In part, Stay and Fight is about that. But it’s also about so much more than that.

Women, Hippies, Minorities – But Not The Way You’re Used To Reading About Them

Stay and Fight is largely a woman’s book, written in a somewhat rugged, manly style, which gives it a nice contrast and freshness. This has incredible charm, and especially because it paints a picture of some really strong women – women who can build a house, have a baby inside that that house – just the two of them, build and maintain a garden, skin animals, wrangle power tools and cut trees. They hunt. They dig holes and haul lumber, with a baby strapped to their backs… They survive. They protect. These are women of nature, women who actually don’t need any man to survive. These are the women who brought us here, up to the 21st century. Goddesses of power! Irresistible power.

But don’t expect them to glorify it. They’re just living their lives. They’re just trying to live in a way where people leave them alone. Because they’re different, because they’re queer, because they want to live like our great grandparents lived – without the plastic imitation of happiness. Off the land, even if it means struggling. And especially because it means freedom. Freedom from the lifestyle we all seemingly choose, and freedom from the people who will enforce this lifestyle on everyone else who wants to live another way.

The characters in Stay and Fight just want to live like our great grandparents lived – without the plastic imitation of happiness. But do you think society will let them? A ★★★★★ 5 stars read: Click To Tweet

Charged up and electrifying, rough and brutal, motivating and inspiring, Stay and Fight is also rather realistic. The life you’re reading about is admittedly incredibly weird to the 21st century person – people getting their food mostly from the forest, killing animals for food, not buying things when they don’t have to. It’s rebellious and it’s just something we can’t imagine anymore. And as you read, you are surrounded by this incredibly different kind of life.

But this kind of life isn’t idealized. I’m only saying this, because a lot of raw vegan movements and such tend to claim that their karma is clean and they basically fart rainbows. Well, this isn’t one of those books. These people are not “one with nature”. To be a part of nature, you have to earn your keep – if you decide to leave the safety of the jungle of concrete. They struggle, but they know why they’re doing it. And reading about it might be weird to you, while you’re still in your concrete jungle, but you can’t help being engrossed in this story. It’s people just like you, but at the same time, it’s so incredibly otherworldly. The takeaway here being, that it’s people just like you. And that your way isn’t the only way.

The Otherness That We Humans Can’t Accept

A big theme of Stay and Fight is the otherness of strange people’s lives and how we are completely not open to other ways of living – how we’ll judge, how we’ll make them change simply because we don’t like it – and not because it’s essentially not good. It goes as far as making even your spouse adopt your lifestyle. Controlling the way they live without intending to – it’s just that if they want to live with you, that’s the way they’ll have to live. Without thinking of the other person’s needs. The book is written in different perspectives that give you insights into the situation, so you see the crushing extent of this phenomenon. It’s done very well, because you can’t seem to decide who you think is right after all. They all make a compelling argument. And isn’t this how life is? Everyone always thinks they’re right, when none of them are, really. Stay and Fight illustrates a situation like that so well. It’s just part of life.

Stay and Fight illustrates how everyone can be 'right' at the same time so well – it's hard to pick a side in this book. ★★★★★ 5 stars: Click To Tweet

Which is why reading about Lily, Karen and Helen was refreshing. Not only are they different, uncaring about any beauty standards or even society standards. Their virtues are different. They don’t care what the others will say. They are practical, they know what matters to them if they want to live life the way they want it.

Stay and Fight depicts a different kind of woman – a powerful one, of blood and flesh, who is able to survive in the wild and doesn't care what you think about her lack of manicure. ★★★★★ 5 stars: Click To Tweet

But You’re Not Allowed To Be Different, Remember?

A lot of the book is just the stories of these women, but there’s a lot besides that which is just there to bring attention to how unfair the world (in this case, America) actually is. If you’re rich, you’re probably fine. If you’re a man, you’re probably fine. If you’re a woman, god forbid queer, and if you’re a racial minority, then you’re in trouble. It doesn’t matter how you’ll want to live your life. You’ll be punished for the crimes done to you. Nobody’s out there to protect you. And if you somehow don’t measure up to the model of life they want you to live, tough luck. They’ll force you into it. Or it into you. As long as you’re not you anymore. As long as you don’t shame them with your existence.

This is the part of the book that broke my heart. Families are policed. Love is policed. Friendships are policed. Even if your way of living in a family, your way of loving doesn’t hurt anyone, it will be broken up if it doesn’t fit the mold. It’s an incredibly relevant topic still in the 21st century. I don’t want to spoil the book, so I’ll just say that it’s a huge thing – children and how the government thinks there’s only ONE way to raise them. And only one kind of family. One with, to loosely quote, “a man, a woman and children all alike”. The state is blind to any other kind of family. And sad to say, many states and countries are. I believe it’s even worse in my part of the world than the one this book is about.

Stay and Fight highlights the problem that many governments only see ONE type of family and ONE way to raise kids, so they will police people's lives over non-existent crimes, and yet fail to punish the guilty. Click To Tweet

Stay and Fight is a huge book. It’s an act of love as much as it is an act of rebellion. Whiteness, privilege, power – and poverty – all defining factors of a lot of people’s fates. Limitations that are needeless – refusing to understand other people’s choices, labeling someone as man or woman, refusing to accept anything but the idea of a biological family – all of these are things tearing us apart, and this is what the book is trying to illustrate. Sometimes we choose the freedom, and sometimes a certain freedom is the only kind we can choose. Stay and Fight is a wonderful book, spanning so many themes, such as family, love, being different, living off the land and being completely self-sufficient, braving it out – and that’s far from being all of it. I can only urge you to grab the book and see it all for yourself. It’s unforgettable.

I thank the publisher for a free copy of the ebook through NetGalley in exchange to my honest review. This has not affected my opinion.

Do you also enjoy reading books about life the way it is, without sugarcoating it? How do they make you feel?