It’s that time of the month again! Time to look at our review copies and rejoice… or despair. But hopefully get motivated! I’ve been moving more and more towards the idea of not requesting any review copies anymore, or at the most one or two a month. But I have successfully not requested anything for the entirety of this month, and I have kept it up with last month’s vibe of reading my old ones. So I have a few happy things to share, some of which you might have already heard:

So suffice it to say that I’m feeling on a roll and I think I’m going in the right direction. I’m very motivated!!

So what ARCs have I read this month?

I have to say that June was a really good month for reading ARCs – especially considering they were old ones, I truly don’t know why I didn’t read them sooner. Most of them were amazing books! I cried, I laughed or was just simply glued to the book for an entire evening. The best ones out of this batch were Have You Seen Luis Velez?, The Sundered and Three Days Breathing. I reviewed Have You Seen Luis Velez? here and it’s a wonderful, moving, warm and relevant book about society, being there for each other, and it has amazing aroace rep. The Sundered is a sort of half dystopian fantasy where humans live on a world inhabited by these quite odd creatures, and of course, humans take advantage of them and don’t know anything about how all of this came to be. The Sundered was so incredibly imaginative and instantly engrossing, I can’t help but recommend it, and I’ll be reviewing it soon. Three Days Breathing is also a dystopia, and it’s somewhere along the lines of A Brave New World, and it’s wonderful – although, naturally, really really sad. I’ll be reviewing it here soon too. Some other truly noteworthy books were The Design and Construction of the Nautilus, which I’m sure I’ve already mentioned once or twice – it’s a love letter to Jules Verne’s creation, The Nautilus, and it’s truly a work of art – soon to be reviewed on the blog. And also Malibu Motel, a novel loosely based on a true story of a lottery winner who died homeless, because a windfall doesn’t equal good skills handling your assets. Most of the others were good too – My Counterfeit Self is a coming of age story of a girl in a rich family, who was sadly unloved and suffered polio, but grew up to be a poet and participated in all sorts of anti-establishment movements, and it was quite interesting. Bunyan’s Guide to the Great American Wildlife was a quirkily written story about a very, very sad thing and problems inherent in areas with a lack of culture and education and a lot of alcohol. The other books were alright, but I won’t go into too much detail here.

Now tell me, how is your ARC reading going?

Anyone is free to participate! If you want to, just link up anytime during this month and refer to this page as to the rules of what to put in your post and how to link up. The next State of the ARC post is going to be on (most likely) July 31st, so if you can’t make this one, mark it down!

To be honest, I can’t believe the progress I’ve made in the past two months. To have gone from over 70 total review copies to almost 50! I’m nearly there. I’ve also got done with a lot of obscure author copies that I’d gathered during my first forays into blogging, which is really nice, cause they’re hard to keep track of – cause they’re not on an aggregated system like NetGalley or Edelweiss: 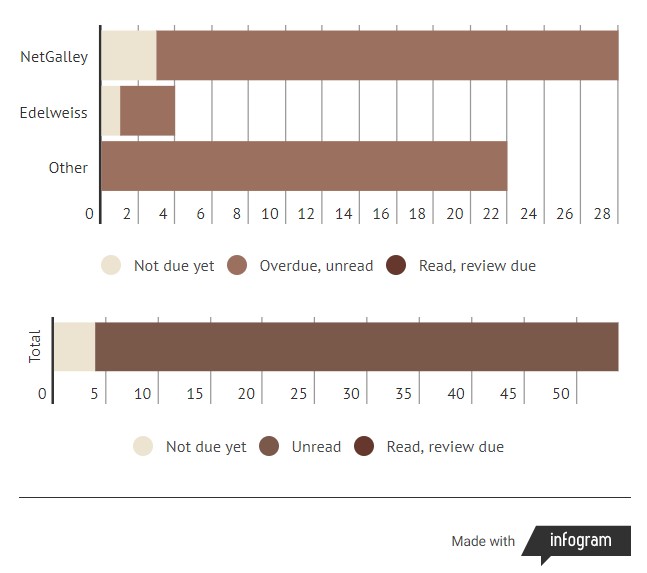 A chart: 4 ARCs not due yet, 50 overdue and still unread and 0 read with a review due to be posted

It seems I’m not doing too well on my own bingo though 😂 I just don’t have any graphic novel ARCs I guess. And while I know reading the oldest one I have entirely depends on me, I… Am just not picking it up 😂 since the bingo is only there for a half a year, it seems I’ll need to come up with a new bingo sheet for next month! 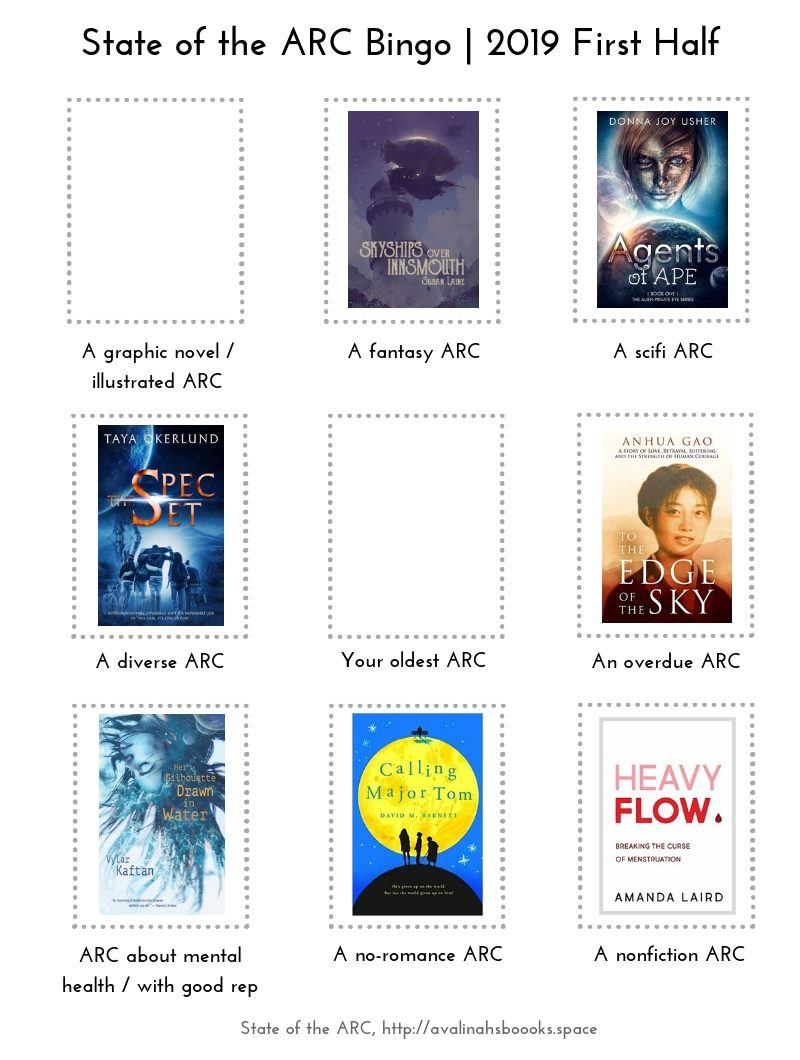 Nothing!!! I hauled no ARCs!!! I can’t even believe it myself!