You know what. It turns out I have only been reading review copies this whole month, pretty much..? O_o and yet, my review copy count has gone up by one book. WHAT GIVES?? Either way. I feel like I’m doing alright… How is your State of the ARC?

Anyone is free to participate! If you want to, just link up anytime during this month and refer to this page as to the rules of what to put in your post and how to link up. The next State of the ARC post is going to be on (probably) October 30th, so if you can’t make this one, mark it down!

So then. It seems my stats haven’t changed much, except they went ONE UP. Huh. It’s probably those unsolicited review copies I was so excited about then, huh. It seems as though this time most of my ARCs go well with the bingo! I’ve put down Ewan Pendle and the White Wraith for favorite color cover (so I’m cheating a little, but it has both pink and purple, and I can never decide between those two.) Tomorrow Factory is a debut, and The Psychology of Time Travel talks about discrimination for mental health issues. 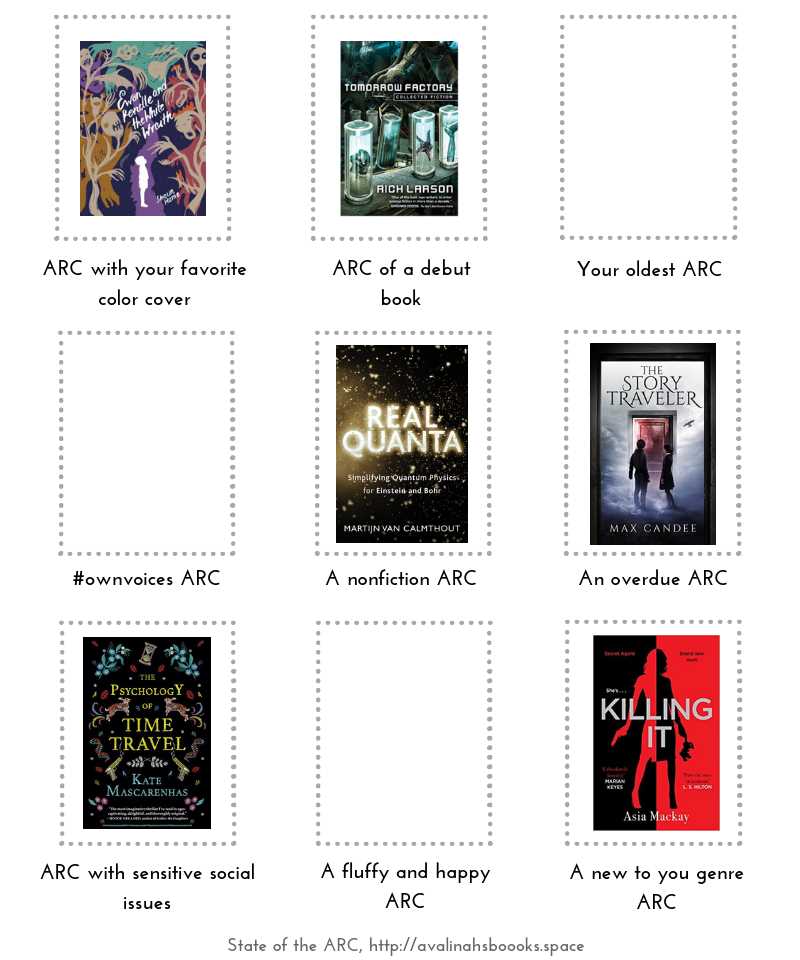 So I’ve got eight bricks, one of which is plastic (means I’ve still got to write the review). I’ll be trying to request less, so I have more freedom with my books, because this month it seems it was hit or miss – either it’s 5 stars, so just a DNF. And I’ve been struggling hard with the DNFs lately.

So these books really mostly divide into two categories: loved and… didn’t enjoy. Well, most of them! I loved Mindless – a really strong short story about a girl who needs to defend her family and has to make some tough choices, gets punished for not having a choice basically. I also really REALLY loved The Extremely Inconvenient Adventures of Bronte Mettlestone and I rave about this middle grade masterpiece here. Of course, I adored the final installment of The Murderbot Diaries – Exit Strategy, and I’ll be talking about it on release day (Oct 2), and I unexpectedly loved Finding Baba Yaga, my first ever novel in verse. I guess I’ll be talking about it sometime, but you shoold definitely check it out! Ah, actually the only book I liked, but had qualms about it, was Ewan Pendle and the White Wraith. It was a great middle grade book, but maybe I just read it at the wrong time, cause it was pretty dark and heavy and it just got me down. The rest of the books… Tomorrow Factory was good, but just not for me – it bored me to death. I mostly DNFed it. The Psychology of Time Travel I also DNFed (life’s too short.) because it triggered me – there was a lot of bullying and discrimination over mental health. But other than that, it is a good diverse novel and raises good questions. And when it comes to Things We Learn When We’re Dead – I don’t think I understood this book, because where everyone else though it was just witty and profound, I found it bleak and tragically depressing. I struggled through it for weeks, but at least I didn’t DNF!

I’m excited about these three right now! God knows, I’ve been excited about Creatures of Want and Ruin for months, and have probably already told you that countless times. But I’ve already started reading it! I’m also really excited about Black God’s Drums, because it came in the mail unexpectedly, and I remember wanting to request it when it was an e-galley, but having no time to read it at the point, so I didn’t request. And I’m just excited about the nonfictional Interplanetary Robots (the robots that went into space with NASA) simply because I’m a huge, huge space dork!

That’s that! So what ARCs did you get and which ones are you excited this September?