There are books you read that engross you so much, you develop these love-hate relationships with the characters. You toss these books over the room when that silly ass girl does this or that. You curse under your breath in a coffee shop when that guy won’t follow through with his romantic intentions despite all sanity and reason pointing to the fact that he should. You shout at your poor significant other when he DARES to ask you a question while you’re in the middle of a really, really, REALLY unfair and tense chapter.

Well, the first book in N.J. Simmonds’ Indigo Chronicles, The Path Keeper, was like this for me. Son of Secrets is the sequel, and I HAVE WAITED ENTIRELY TOO LONG for it!! Never have I EVER (not since high school, at least!) been in such a hot and cold relationship with book characters! On one page, I love them, and then ten pages later, I hate their guts for making this or that choice. These characters will just do that to you, I swear. Which, oddly enough, makes it one damn good read!

So I’m happy to say, this year I’m on the blog tour for Son of Secrets! (And I seriously can’t wait for the next book in this series, hopefully next year.) Son of Secrets was amazing, I loved it, and I simply devoured it. Here’s more about why I enjoyed it.

There are books you read that engross you so much, you develop these love-hate relationships with the characters. So much so that you toss a book when the character does something dumb. This is one series like that (in a good way!): Click To Tweet 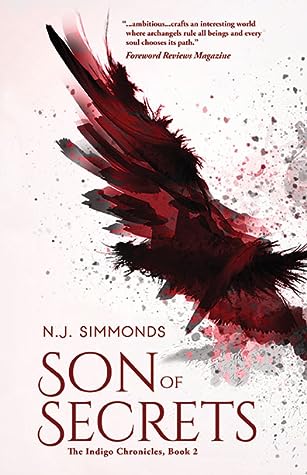 In the previous book, The Path Keeper, we got to follow the story of Zac and Ella – and their unusual meeting. Ella’s just a girl, but Zac… Zac is an angel who’s supposed to keep an eye on Ella – to make sure she follows her life path. Except… Zac has also been in love with Ella, for, uh… I don’t know, the last 2000 years?!! And he’s never got to talk to her ever since that one lifetime when they were actually together. Until the events of The Path Keeper.

The Path Keeper takes us on a wild ride of a story of how Ella and Zac finally get to meet. But then all hell (well, actually, all heaven) breaks loose and something bad happens. I don’t want to spoil it for those who haven’t read the first book, so let’s just say that things take a downward turn and bring us to the events of this book, The Son of Secrets.

And let me tell you, are the questions answered, alright. The Son of Secrets is focused on finally letting us understand what happened to Zac. And his mother. And it’s all about what’s next in store for our star-crossed couple, and it’s one hell of a drama.

If the first book, The Path Keeper, was hard to get away from, Son of Secrets was purely impossible to unglue myself from.

This is such a weird series – weird in the sense that it makes me angry and eye-rolly, but also I am just plain old stuck to the page with my heart rate up.

It’s seriously one of those books where you kind of have to practice speed reading through parts of it cause OH MY GOD those pages just can’t flip themselves fast enough for you to find out what’s going on!

If you're ready to go on an emotional rollercoaster along with the characters of a book, try reading Son of Secrets by @NJSimmondsTPK: Click To Tweet

So Full Of Feeling And Completely Manipulates Your Emotions A pencil drawing of me, completely absorbed in a book, with book stacks beside me

The Indigo Chronicles is one of those series that makes you feel A LOT, and you will both love and hate the characters and especially their choices. At least I did! So after reading the first book, at the time I wrote the review I may have been a little salty and angry at everything that happened, and so I may have given it less stars than I should have – now I realize this.

The trouble with that is that only a half a year ago did I realize that I was painstakingly checking NetGalley for the next book in the series every weekend – not every book leaves you THIRSTY about what happens next!

Angered by the characters or not, it’s a damn good story if it does that to you. Which is why I was so anxious to find out what happens next! I let myself run with the characters, instead of questioning their morality or choices and putting them into behaviors that seem natural to me, and the story just flowed and flowed, and left me full of emotion.

And man, does a lot of stuff happen. So much drama! Get yourself some popcorn, seriously, because reading this book is one hell of a ride.

I was mad at the first book, but then realized I was checking news on the sequel every weekend. What is this series, you ask? Check out The Indigo Chronicles by @NJSimmondsTPK: Click To Tweet

What I also loved in Son of Secrets was the love triangle. And that’s weird! Because I normally HATE those. But this.. I don’t know, at some point I was rooting for “the other guy” as well?

Ella is really unsure of what to do – you can see how she’s 50/50 on both guys and genuinely doesn’t know what she wants to and who should she choose. She’s tired of fighting life and going against the grain – it is much easier to just embrace your life path. But… Is it really what’s best for her? (To be honest, after finishing the book, I don’t even know how to answer that question myself anymore! Book 3 can’t come soon enough.)

We Get To Meet Zac’s Mom And… She’s A Handful!

I won’t go into a lot of detail about what/who Luci, Zac’s mom, really is – for that would be spoiling! But I’ll say this much. Luci is a good depiction of a ‘demon’ – but a realistic demon. A woman demonized just because she didn’t bow to someone’s will, a witch – the original witch.

She can be bad, but she also just likes getting her way and can’t be bothered – she’s not inherently evil and she doesn’t crave destruction. But she is the product of her life – trampled on, demonized, and her only son taken away from her cruelly.

Luci doles out punishment that may not be not proportional to the crime of the people who got in her way, but her answer is also understandable given that she’s been living in a sexist, oppressive, judgemental and cruel environment for over two thousand years – her answer is of the pissed off, dead-tired feminist who simply has the power to make them pay for once. It really quite matches the attitude of many women’s movements right now, although may be a bit hyperbolized to make the point come across faster. It certainly gave me the vibe of how tired of this crap women as a whole are at this point.

And that’s why I really liked how her character was framed – because after the first book, when we didn’t know much more than just hearsay about her, I was expecting an innocent victim in hiding, but instead what I got was a strong-willed rebel.

It was surprising, and at first I didn’t know what to think about it – but then I realized that this kind of Luci is WAY more interesting to read about. She is the mythical great mother, and she’s been disappointed. She will still protect the children, but everyone else is on their own. I adored Luci’s character.

And not to spoil anything, so I can’t say too much – but I absolutely loved the feminist / witch themes NJ Simmonds had in the second part of the book. This is a much needed conversation and it was done well, and I feel like the historical backdrop was also great!

The witch or rebellious woman themes in Son of Secrets by @NJSimmondsTPK were amazing! I felt they really captured the essence of the tired feminist who just wants to be left to live her life: Click To Tweet

The book was amazing, and I loved it even more than the first book! It’s a rarity that books get better as the series goes along – and this one certainly knocked me off my feet. I simply can’t wait for the next book!! Bring it on, NJ Simmonds!!

Please visit other stops on the tour! 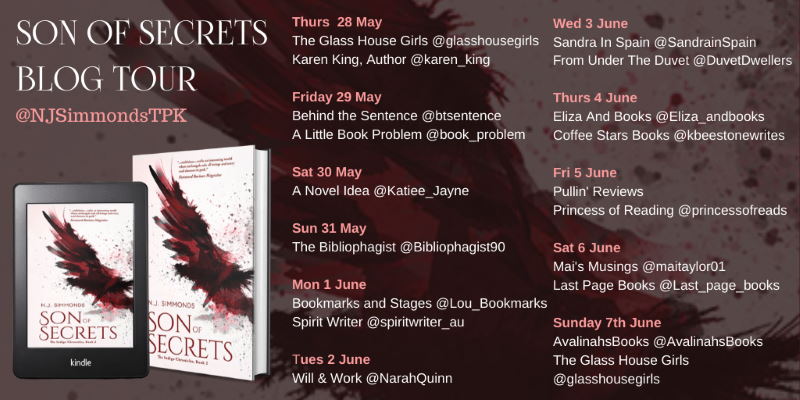 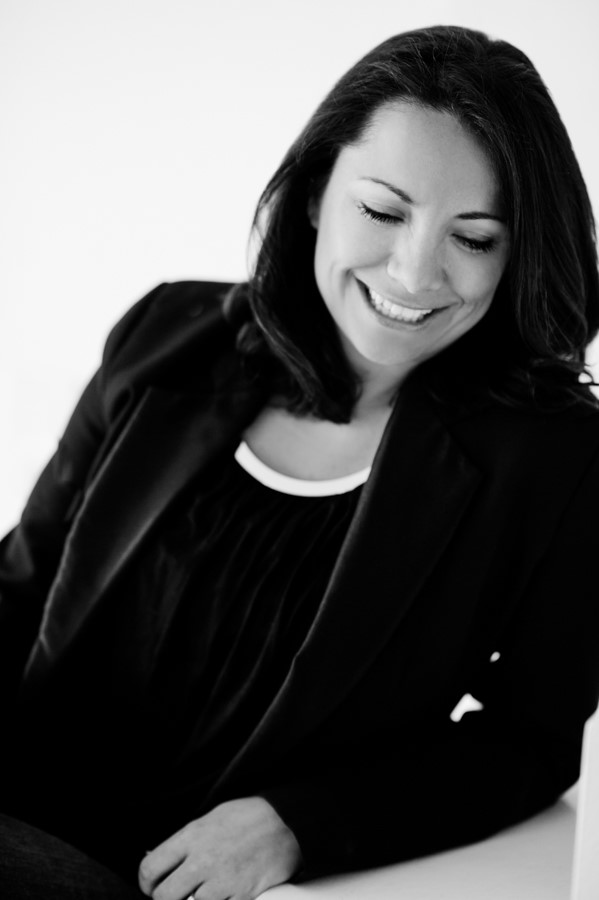 N J Simmonds is the author of fantasy series The Indigo Chronicles – she also writes Manga comics and is one half of Caedis Knight. Her stories are magical, historical and full of complex women, page-turning twists and plenty of romance. Originally from London, she now lives with her family in the Netherlands.

So have I convinced you yet that you need to pick this series up?