The Forty Rules of Love has been on my wish list for a long time, and I wish I had got to it sooner. I instantly fell in love with it! Although, when I think about it, maybe it’s best to read books when you’ve forgotten even the blurb. This is how I picked up the forty Rules of Love – a quick glance through the shelf in the library, me remembering I wanted to read this years ago, considering I must’ve had a good reason, and here we are. And like I said, me and the book instantly clicked! 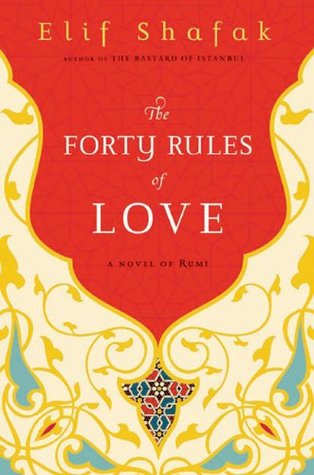 The Forty Rules of Love weaves two stories together – one of the acclaimed philosopher and poet Rumi and his beloved, yet tragically lost close friend Shams of Tabriz, and the modern day story of Ella, a wife in the perfect American family, yet a loveless marriage that is about to break. These two stories of love and tragedy mix together to bring a blend of spirituality that will make your heart bleed and resonate with all the forty rules – which you can actually find in this book.

Simple And Sincere Spirituality, But Not Over The Top

The shape of a woman, meditating in a lotus pose, seemingly sitting in a crystal ball, with the front window showing her craft hurtling through space

The Forty Rules of Love is surprisingly poetic, and yet – also really simple to follow. The writing and emotions feel sincere, the language, while being aesthetically pleasing, doesn’t seem pretentious at all. And perhaps the thing I liked the most is the fantastic element of an ancient, outlandish story intertwining with the modern world. I feel like this is a book that could appeal both to hard-core fans of books like the Alchemist, and also to people who, um, like simpler, less flowery prose and maybe less dreamy sounding slogans for spirituality. Why “um”? Because I liked The Alchemist too when I was 16, but a little while later I started thinking that maybe it was a much too sweet and sterilized view of spirituality for me. So I don’t want to offend the fans, because I also understand why they like it, but I find myself somewhere in the middle of the two crowds, when it comes to the “dreamy” kind of spirituality like that. Anyway, what I’m saying is that The Forty Rules of Love has a little bit of that same feel in the story – enough so that the fans of the Alchemist might enjoy it, but also not enough to make the others roll their eyes. So basically, just the right amount!

The Forty Rules of Love is poetic, and yet – really simple to follow. Fans of The Alchemist will love it, and yet, fans of more down-to-earth spirituality won't roll their eyes either. Click To Tweet

It’s Essentially Two Books In One

I really love stories told like this! The Forty Rules of Love is about a middle-aged woman, struggling with her marriage in modern times, but it’s also about some Sufis from the 15th century. The stories intertwine through “a book in a book” – because Ella, the modern times character, is reading the manuscript and writing her first literary review, having just got a job at a publishing agency (yet another detail that might appeal to bookworms!) I will have to admit, though – my favorite story between these two was clearly the 15th century one – without a single doubt. I’d even venture to guess that It will have been most readers’ favorite. Because Ella, the modern times wife, is kind of an insufferable character! She is cynnical, not open-minded at all… She is basically a Stepford wife. I’m pretty sure that’s the way she was supposed to appear – so we could witness her gradual change.

However, there’s more than that in this for me – Ella’s life is dripping incredible privilege, and I don’t know if that was intentional or not, but it angered me at times. The fact that this woman has the privilege to not work, to have time and the luxury to choose what and how she will do, that her house gleams, and she has more than one such house – and gets a dream job only because her husband knows people – all of that is infuriating when you couple it with the fact that she does not count her blessings and isn’t happy. As a European person from poor origins who has had to earn every little thing herself (AND support her single parent as well), I hate reading about characters like that. But then again, I can’t hold it against the book either – because first of all, that’s America and it is how it is, and secondly, I think this character was intended to make you feel like that. So, if anything, it only makes the book better!

The Spirituality Is Not Being Sold To You

I know I would have shared so many quotes on social media, had I been reading this in English. So many thoughts appealed to me, and it might just be that this particular blend of spirituality really works for me. But what I liked about it the most is that the philosophies in this book are not trying to sell themselves to you. They’re the kind that you have to come and pick up yourself, if they appeal to you. They’re simple, yet poetic, and they’re so incredibly sincere – it seems they are coming straight from the heart of the one who wrote them down. Simple, yet poetic and emotional – that’s not an easy way to write something. And I think that’s why I couldn’t unglue myself from the book.

The philosophies in The Fifty Rules of Love are not trying to sell themselves to you. They're the kind that you have to come and pick up yourself, if they appeal to you. This is what makes the #book irresistible. Click To Tweet

Ultimately, The Forty Rules of Love is not meant to teach you or make you more spiritual. It’s just telling you a story, and you can make what you want of it. But the pervading theme, in my opinion, is that if you really want to experience life, and experience it in a manner that moves you, lights you up and basically lets you live a little, you have to let it go and let life live you – not the other way round. No matter what happens – even if it’s dangerous. There’s no other way than to face life and its lessons head on – and face them with love.

Because love isn’t just the romantic love. Love is all pervading. Love is what makes you alive. Its not about romantic love. It’s about love for the existence of everything.

Love Through The Prism Of Friendship

A GIF of animated hands, joining

In the Western cultures, love between friends is often a no-no. Any mention of that is reduced to romantic love (which is problematic for so many reasons – and, to be honest, it’s why aro ace people get treated so poorly – because we have no concept of non-romantic love in the Western culture, sadly.) There can only be romantic love, and even parent or sibling love is being mentioned only in very careful circumstances.

But it seems in the older days, love was a broader term. Loyalty, understanding and true lasting relationships between friends was also often called love. Knights had close friends they could die for. Even in the Oddyssey and the Iliad characters wept at the loss of their friends. It was no shame to love a friend. Where did we lose this?

The 15h century story in The Forty Rules of Love helps bring this back. Love is talked about as if it’s divine, and no matter what kind of love – especially love between friends. It’s portrayed as pure and helps you see and understand beyond your own self and your limits. (After all, any strong and lasting romantic love only comes if there is friendship – before or after the act of falling in love with someone.)

I really liked this exploration of a different kind of attachment in The Forty Rules of Love. It is a subject I’d like to see more in books! But The Forty Rules of Love just has so much more than that in it. There is so much symbolism, for example – details such as every chapter starting with the letter B, because it’s divine and it holds everything in it? To be honest, I probably missed a lot of the hidden meanings, coming from a Christian background, as this book is essentially about Muslim philosophers, but it was just as majestic and wonderful all the same. I truly think you should try this book for yourselves! I think The Forty Rules of Love might be one of those books that opens up to every person in its own way. And maybe you can then tell me all about the way you saw it too?

Shame on me, because I didn’t write the triggers down a month ago, when I read this book. So I’ll try to remember to the best of my ability! From what I can remember, there’s

These are going to be a bunch of quite different books! But they all have something in common with this one (links on the images.) I really enjoyed Island by Aldous Huxley, because it’s a kind of utopia that also doesn’t try to sell its spirituality to you, and it presents such a different model of life and happiness to our Western, capitalist philosophy that it’s truly a delight to read. When the English Fall, meanwhile, presents the Christian Quaker pacifism in the light of the end of modern civilization. It’s a study of societies and their strengths and weaknesses, as well as the lengths people are ready to go to to stay true to what they believe in. I loved it, and here’s my review of it. Then, I’ve already mentioned that it has some stuff in common with The Alchemist, but I feel mixed about that book myself, so I’ll just say that while they have stuff in common, they’re not the same either, and you might like The Fifty Rules of Love regardless of whether you loved or hated The Alchemist.

Have you read any of these books? And do you like books that have two stories – one set in the present, and one in the past? Does fictional spirituality normally go down well for you?