When I first started my journey of following Ewan Pendle on his adventures, I remember giving the first book a half-star “in advance” – because I knew the story would eventually start rolling. Having finished Ewan Pendle and the Castle of Nightmares, I am glad to say that I knew what I was saying! The story indeed got rolling – so much so that the first book almost feels like a prequel, or as if it was mostly meant to set the stage for the larger picture to appear. Book two not only answers some really huge questions that we had in book one, but gives us some new ones – not to even talk of the huge plot twists that come our way. 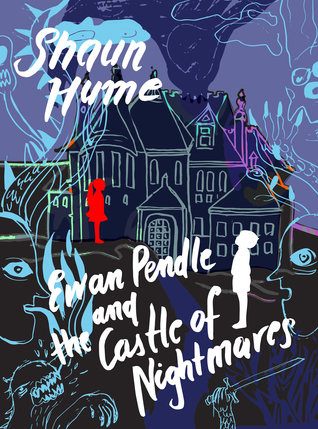 Ewan Pendle has succesfully survived year one at Firedrake, a school for children who are essentially somewhat… magical. But despite spending an entire year at the school, uncovering and almost blowing a huge secret mission against the Queen and generally learning more than he ever has before in his short life, Ewan is still just as confused both about the world and himself as he was when he was a fresh-faced first year student. Not only that – there are so many new questions that are forming in his mind. But the main one remains… His family. Answers to that question just don’t seem to be forthcoming, but Ewan can’t stop having these strange nightmares, and he’s about to find out they’re not just going on inside his head…

The Book Plays A Long Game

A GIF of a cat, licking his paw and flipping a page of a book that is called ‘The Art of Military Strategy’

The funny thing about the Ewan Pendle books is that you can only enjoy them together, so to say. That’s because the author is playing a long game, and you won’t even find out that that’s the case until you read book two! After finishing book one, I had so many questions that were left unanswered. The story wrapped up, and some things were left as they were, and to be honest, I found it jarring. I wondered if perhaps the author forgot to explain those things to us? That’s why I feel I might have given it a lower rating at the time.

Turns out? Everything was in the plans. Because there are some strings that weren’t even mentioned at the end of book one, and yet they suddenly surface in book two and provide some huge twists and story changes! So its not at all that things have been forgotten or neglected. The author simply sees Ewan’s story as one big piece, divided into tomes – and not simply several separate books. All these books are going to be like a chapter in the story!

Which is why once I realized this, I started taking mental notes of the hooks that were thrown into book two, and let me tell you – there are a lot of them – I can’t wait to find out what they turn out to be!

A Dark Story That Still Makes For Good Evening Reading

A GIF of a clouded night with the moon, the clouds parting to show it

So I might have accused book one of being a tad too dark. Well, Ewan Pendle and the Castle of Nightmares is no walk in the woods (actually, there is a walk in the woods segment, but it’s quite dangerous!) Anyway, the story is also dark, but somehow it makes for very pleasant reading, somehow? You’ll be surprised that this was my evening read before bed for quite a few weeks. The story is nicely cohesive – a thing that I felt lacked in book one. The series is developing a very specific feel that is unique to this particular story, and I really like it when books are like that. It was a very enjoyable! About the only problem for me was that the story called for more suspension of disbelief than stories normally do for me, but it IS a story about a school of “sort of magic”. Speaking of which…

What Exactly Is Firedrake A School Of?

That’s the thing about Firedrake – the magical school – you can’t write pin it down. It’s not quite a school of magic! Yes, there is a whole clique (what you’d call a ‘house’ in Harry Potter, for example) dedicated to witchcraft, BUT it is said to be the youngest discipline, and only a select number of cadets can even perform it (so, they’re not all taught magic.) And to be honest, I’m not sure I’ve seen even ONE cadet do any magic yet. The three other cliques are dedicated to stealth, physical prowess and sword fighting. About the only thing that’s rather otherworldly about all of the cadets and that they’re got in common is that they can basically see paranormal creatures – and that’s it. The whole learning process is geared towards teaching the kids to protect other people from these creatures. And it’s this concept of a ‘magical school’ that doesn’t fit into typical any mold that fascinates me! I love it when things are original. And there seem to be no strict rules about what goes and doesn’t go in this world, in terms of ‘magic’. I love that!

The Ewan Pendle books center on a secret world of magic, which actually isn't quite... magic. It's a very interesting and unique idea, and it's very refreshing to read about. Click To Tweet

Then, there Are All The Girls

A GIF of an animated fist with a bracelet with the symbol of a woman on the wrist, being raised in power

Truthfully, this is a feature that book one did wonderfully too! And book two certainly takes up the mantle. The female characters are just GREAT! There is a stunning array of them, and they are both good and evil characters – all of them done well. The two main ones, friends of Ewan, Mathilde and Enid, might take a bit of a backseat in this one, letting Ewan do more of the dirty work alone, but it’s always them that drag him out of the most awful situations. Then there are all the villains! I truly enjoyed reading about the women villains. And of course, the headmaster of the school, Enola, a fierce swordfighter, and Betony, a reformed felon, a sneaky spy, a true delight for a reader – because she never ceases to be a source  of secrets. I can’t wait to see where all if these characters’ storylines go!

I truly did enjoy Ewan Pendle and the Castle of Nightmares! There are so many things I would have liked to mention – but I can’t, because I don’t want to spoil you – those were things I was truly surprised to see and never ever saw coming! So I’ll just say that I can definitely recommend this series. Book one is good, but book two gets so, so much better!!! So much so that I can absolutely not wait to see what happens in the long run. And I don’t just mean three books, as is customary – I’m in for all of the books, however many there will be.

Admittedly, Ewan Pendle #2 is quite a dark book. And it takes its darkness as if it’s completely normal. So there will be some triggers. Look out for

Have you read many magical school books, aside from the obvious one? Do you generally enjoy them?