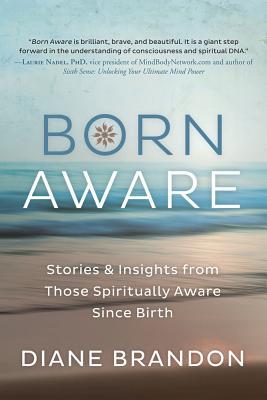 If you’re only here for the fun and the fiction, turn around. This post is not for you. In fact, if you haven’t heard terms like lucid dreaming, awareness or consciousness, or if you use terms like reincarnation or karma as topical jokes only, you might find this post weird. So it’s best for both me and you that you stick to my posts about fiction. Especially if you’re religious. I don’t want to offend anyone’s beliefs. ‘Kay?

Also, it might be a bit of a touchie.

So now that I’ve got the attention of those who are truly interested, let me talk to you about a lovely book called Born Aware. You might have realized that I’ve dabbled in matters of consciousness before. I would say I believe in at least half of ‘that stuff’, some by experience, but I wouldn’t like to delve too deep, because this isn’t about me – it’s about the book. Long story short, though, I have had extraordinary experiences, I have always felt different, I have always been different.

Hey, it’s perfectly fine to call me a weirdo. You weirdo.

Which is why I picked up this book. I have read a lot of ‘weird’ things (not that I think them weird, society does), Carlos Castaneda and Jane Roberts among them, and many others. So I know my way around this. Which is why I can say that Born Aware is good spiritual literature. It’s unassuming, geared towards the better good, does not judge, does not try to get you to join any cult. It’s just there to tell you the stories of people who were born aware (meaning, people who remember being born and being a baby). If you’re skeptical – of people, who believe they were born aware. It’s not really a big difference if that’ll make you feel better about reading it.

So was I born aware? No. Fortunately or not, like any normal person, I can only remember my life as of maybe being 3 or 4 – which is even relatively late for most kids. But I could say I was born spiritually aware (the book goes more into what that is). I won’t go into why (quite personal, and this is not about me), but the bottom line is, I felt very alone in being like this. When I’d feel or do one thing, society would always do something else. Society punishes you for being kind, for being spiritual – unless you’re the fashionable spiritual, that is.

I’ve believed in people a little too much when I was kid. I would rather take the bullying than bully someone else to fit in. I’ve always believed everyone’s goal was to make it the best possible world for everyone (keep dreaming…) I’ve always suffered from heightened empathy. And I’ve felt like such a weirdo, doomed to be nice to others when they step on my face, cause that’s who I am (here I am typing this and thinking you’ll say I’m bragging, and being embarrassed about that. I am absolutely not, I can tell you I have been embarrassed about not being able to lie (legit), at paying for my parents’ bills when they were jobless although everyone said I should just “let them have their own problems”, at hurting when other people hurt – I am legit embarrassed of being like that cause it does not pay at all to be this way in society.) I am still failing at getting to the bottom line, which is THE BOOK TOLD ME I WASN’T ALONE.

Every single story the book told – acting and feeling differently, being deemed too kind, being unable to lie, being bullied, being depressed – some go as far as trying to commit suicide at age 5 (!!)… Not feeling like life was seriously meant to be lived, cause it’s just too hard and heavy. All of it fit in so well with what I’ve always been feeling. And suddenly I wasn’t alone anymore. Suddenly I was just.. different. But I wasn’t the only one different.

I’m not saying this book is for everyone. It might not be for you. But even if it’s not about people like you, you still should read about those who have come here with something more than we have. To read about how much of a gift, and yet also a punishment it is (so far, I’m siding with punishment… ugh.) If you’ve ever felt like maybe the world is running the wrong way, that maybe we’re all a little (or a lot) too selfish as a society, that something is fundamentally wrong with us, and we all lack trust of each other and feel like we’re not all one, that we should work together instead of fight, you should read this. Yes, perhaps you’ll cringe at the mention of reincarnation (a lot of people do), and I’m alright if you cringe at me – but I believe reading this can be a truly enriching experience. It might even tell you more about who you are.

I thank Llewellyn Publications and Diane Brandon for giving me an early copy of this book in exchange to my honest review.

So do you read anything of the sort? Do you think I’m weird now? 😀