The Zanna Function was AMAZING!!! It was so amazing, I had trouble finding what to pick up next after it, and then spent at least a week actively missing reading it. All I can truly hope for is that it won’t be a standalone, because it’s too good to just end right there!

5 Reasons To Read The Zanna Function 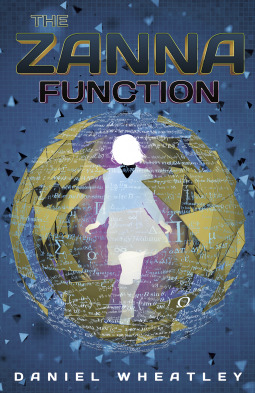 Zanna Mayfield is a smart 14 year old. She loves doing puzzles and loves science. Too bad the other kids at school don’t really love her. But maybe that’s not such a big problem after all, because Zanna has just received a formal letter, inviting her to join St Pommeroy’s, a school for scientifically gifted children. She is very excited, but she doesn’t know the half of what she’ll find there.

Because the school for gifted children is basically the Hogwarts of scientists. Who use their ‘science’ as you’d use magical powers. However, things are not that simple – there is someone pursuing Zanna, trying to keep her away from the school, trying to… Kidnap her. There’s something dark and dangerous out there, and she’s just a kid, even if she’s gifted. And she’s all alone against it, because since when do the authorities ever help a magical kid defend against a powerful dark being..?

In the words of Scifi & Scary, this is like Harry Potter – but with a girl and science instead of magic. What else could you possibly want??

Come on, you totally want to see how science becomes magic. That line about HP so totally got you right there. It’s what happened to me. However, keep in mind that this book is no rip off! It’s full of its own lore. You have to go in without expectations. But hey, even if you go in wielding those, I think you’ll still come out fine. There were a few things about how this ‘sciencey magic system’ failed to suspend disbelief for me, but they’re details – this whole concept is so unique, I’ve never seen it before! Plus, hell, SCIENCE! Science becomes magic! It’s all just way too cool for school. But it IS a school. *badum tss*

Kickass. Girl. Does. Science. WINS AT IT. Plus… Kickass Female Villain!!

Not only does Zanna proves to be as smart as she was thought to be. She also proves herself to be mentally strong and able. Cold thinking, but also honest. Willing to make sacrifices to get where she needs to get. She might even be too adult and strong – but if you’re a teen reading this, this is the hero you need to see. You need to see a girl just like you achieving all of this. And Zanna is amazing for the job.

And then we must talk about the villain. She’s very well-fleshed out – not just brutal, or evil just to be evil – it’s all very well thought out. And let’s move back a few steps here – the villain is not a guy either! This whole book is basically centered around kickass women!! It’s so incredibly empowering, and you know what? These women, they ain’t doing cooking, they ain’t doing art. THEY’RE DOING SCIENCE. When I was a little girl and thought I’m too stupid for science, cause they kept telling me that – this would have helped me out so much! In the end, I did take the science exams and came out top of my class – but it would have been so much nicer not to have to fight my own inner ‘you’re just a girl’ demons before I did that.

When I started The Zanna Function, I expected yet another calm-ish magical school book. NOPE! No. Peace. Of. Mind. The three or four days I spent reading The Zanna Function were all me being jumpy about what happens next, cause this book is just filled with tension. It’s not that things keep happening and rolling over each other, it’s more that there’s just all this anticipation and danger! It’s really quite intense.

The reason why I avoid most YA is the boy tropes. I just… Can’t stand those perfect – or worse – brooding YA heroes. While this book falls somewhere between MG and YA (I’d have trouble deciding, actually), it does not have any ‘perfect guy’ tropes. There are a few boys in the story, but they’re never presented as mysterious or cool, in fact – their bad qualities are stressed and exposed. But don’t think you will not find lovable boys in this book – there are two possible book boyfriends, depending on your taste – whether you like the vanilla top of class who is actually really kind, or a misunderstood rebel who has quite a lot of flaws but is also pretty hot stuff, or rather, will grow out into one. One thing to be noted, the book does not really talk about relationships yet – it’s more an anticipation of their possibility, or just close friendships. That’s why I say this is bordering on the MG and YA threshold. And it’s why I really loved the dynamics!

Focus On The Self

The Zanna Function isn’t just a book about being good at science. Or conquering enemies. No, The Zanna Function has its deep moments too. Besides studying Physics, Maths and Chemistry, the children must understand the self as well – as you cannot uncover the mysteries of the universe, without first uncovering the secret to the self. There’s a lot of talk about the self here, and the importance of not hiding from one’s self, understanding oneself. I believe these are very important topics for a teen to read about – and not just for a teen, but rather for all of us.

GOD, JUST READ IT ALREADY. Please? You will love it? Granted, this book might have some flaws, like  – but all of these are really minor details in the general scheme of things. All I know is that I really hope that this will be part of a series and I will get to read Book 2, and possibly Book 3, and possibly even Book 7! Please, bring it on, Daniel Wheatley!!!

Well, I don’t need to explain why I compare The Zanna Function to Harry Potter anymore, do I? As for Blood Red Road, it is quite different in feel, but it shares the same kind of strong female heroine. It’s similar with The Girl with All the Gifts as well, except there’s also the scifi element and the less-YA feel to it. And I’m comparing it to Felix Yz just because I feel like it, so there! Something about these books is similar, but I just can’t point it out. They have a similar tone and similar virtues.

I thank
Jolly Fish Press for giving me a copy of the book in exchange to my honest opinion. Receiving the book for free does not affect my opinion. You can buy the book here at Book Depository and buying using this link supports the blog.

Have you read The Zann Function? Have you already heard about it? (Most likely, from me…) Will you consider reading it?