So this is actually a book people have been waiting for me to review. And yet… I finished this more than a week ago, and I still feel like my review is nowhere near the way I want it to be. No pressure.

So I’ll just have to publish the review the way it is, because over all my fretting the book already came out and now it’s not even an early review. Oh well. Here goes. At least you know you’re looking forward to the book, right?

The Bear And The Nightingale by Katherine Arden 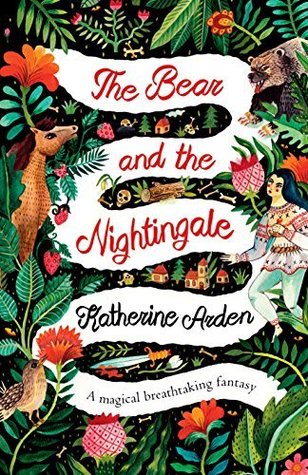 Let me begin with the fact that I think Russian mythology is great. I regret only that my own people’s mythology could not be preserved in such splendid detail. I grew up with the beginnings of the understanding of Russian folklore at least a little (it’s a neighbouring country) and I found out bits and pieces through other great (non-Russian) fantasy books like Deathless or American Gods. The Bear And The Nightingale only reinforces this feeling! Slavic mythology is great, and I DO want to read more about it.

I also can not believe this was a first book. It’s just so good!

So onto the review. What did I expect from this book? I couldn’t hold back from thinking it would be something like Deathless – a girl, spirited away into the crazy world of beasts and magic, expected to defend herself and clear her own path. But of course, going into the book, I consciously realized that comparing it with another I really liked is by no means a great way to look at a new story. However, I found out it’s absolutely different from Deathless – and that’s great.

We observe Vasya, a Russian girl in the middle ages, growing up. She is not a typical girl, and to be honest, she should have been happier to be born a boy – especially in those days. This is the part of the plot that comes in when the story deals with women’s position in the middle ages – either at the hearth raising babies, or at the coven, hidden away. There was simply no other way to be, and so we learn the cruelty of such a limited existence. Especially if you’re different – like Vasya – a little roguish, a little tomboyish, and.. a little magical. 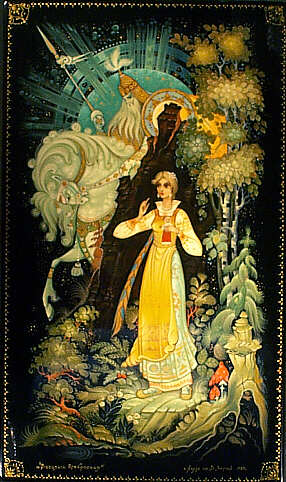 Vasya has to grow up without a mother. Of course, her father brings her a stepmother – what fairytale does not have one? While she is also ever so slightly magical, these two women are contrasted in how they deal with it. Vasya accepting her gift happily, and Anna only panicking, screaming and running away to hide from what she thinks is her curse.

And so Vasya is shunned by the village, by her stepmother, and pitied by her family. The new strict priest doesn’t help either. Unfortunately, he brings such unrest into the village that people stop observing respectful rites for the old spirits. And slowly, their world tumbles into darkness. I don’t think the author wanted to criticize Christianity so much here – I think she merely wanted to show that if you take people’s belief in the very basis of their existence away, nothing good will come of it. Also, in this critique of the violence of Christianity over other faiths in the middle ages, the author contrasted real faith with broken, fearful faith really well. We see an example of a priest with a very broken spirit and very dark views, but we are also presented with other priestly characters in the story, which are bright and respectful. The author will not tell us what to believe. She will let us choose our own opinion.

So what is this book about? It’s about so many things, so many layers of society and how it works, so many problems in it as well. It’s also about magic and bravery, although I did not mention it in this review. Yes, there’s load of magic and spirits, there’s the evil Bear who symbolizes the evil and greed of the world, and there’s Frost/Death, who is the good guy, as much as demons can be. There’s loads of horses too, and they.. sort of talk. In the end there are even brutal old-Russian style bloodsuckers, which is pretty cool! But for me, that is not what the book is about – those are just the props, so I didn’t talk about them a lot. For those in doubt – it’s a proper fantasy book. And you’ll probably love it! There’s just one thing – don’t expect too much action – this is one of those books where the scene is being set for at least half of the book, steadily darkening the setting. And only when you almost reach the end, you experience the action. It’s also definitely adult fiction, it’s serious and not quirky, no banter or other things common in YA, if you were expecting those. It’s not anything nor the sort. But it is very satisfying, the characters are relatable and the fantasy interwoven into reality so seamlessly you will start looking out for imps in your own back yard.

So there you go. My surprisingly timid review for an exciting fantasy book. And I’m a reviewer. #FML.