I haven’t really had a Sunday post in about a year, and today I thought, maybe it’s time to revisit it? I’ve got a few mini reviews and I also wanted to take a look at my ARCs, so why not! Let me start with the mini reviews.

The Family Holiday by Elizabeth Noble 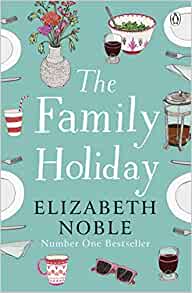 Check out on Goodreads
★★★★☆ 4 stars
How I read this:
free review copy through NetGalley

The Family Holiday was a good story full of quite realistic characters you might even get attached to in the end (which I did!), and it had a good amount of well-rounded stories in one book. We follow family holiday, arranged by the grandfather, actually planned years ago by his wife, who is long since gone. It is Charlie’s last attempt to get all of his family together and grasp that fleeting feeling of belonging that hasn’t quite been there since he lost his wife.

Everyone else in the family seem to have their troubles too. Nick has lost his wife a year ago and is now scrambling with grief, loss and three young children. Laura is going through a divorce and is dealing with some other quite serious family stuff as well. Scott has only recently got married and his Instagram influencer wife is basically perfect – but he worries his family thinks she’s not genuine. Who knows how they’ll all do, when put together in a country house for 10 days?

The Family Holiday was marketed as “the feel-good book of this year” or something of the like, and while I did enjoy it, I wouldn’t say it was “feel good”. Yes, each family branch has their own story which was very well written and I have to say, incredibly well rounded-up in the end. But they weren’t very “feel-good” – in fact, a lot of the material left me anxious and stressed out, because there were some serious problems they were solving and there was drama involved. The story is heavily family oriented, and the characters are written well, it all makes sense – I truly did enjoy the story, but I also wanted to mention that it was quite a bit more stressful to read than I expected it to. But definitely worth a read nonetheless! 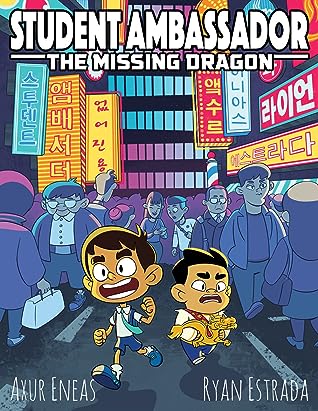 Check out on Goodreads
★★★★☆ 4 stars
How I read this:
free review copy through Edelweiss

Student Ambassador – The Missing Dragon was a lovely graphic novel. The story has such a wonderful message –that if we all tried to be ambassadors to everyone we meet – tried to represent our country, our workplace, even our family to them, and tried our hardest at it, the world would be a better place.

There is a lot of stuff about South Korea here and there’s even some stuff on how you learn to read Korean, which may get the reader interested in learning it! In fact, the story is very, very loosely based on the two separated Koreas – and how it would be nice if they joined again.

The student ambassador meets a very selfish boy-king of an imaginary country, which incidentally also happens to be broken into two countries of the same ethnic origins, just like North and South Korea, and is quite close to them. But the comic isn’t political – it’s more about being selfish and learning to be better about it. It doesn’t poke you in the fact with moral righteousness, though – it’s just naturally presented through how the two kids interact, one of them being nice and getting his way through kindness or just cunning, and the other always taking what isn’t his and being incredibly entitled, because he is a king, after all.

The comic is also fun to read because it’s got a good, dynamic pace and the illustrations are really cool too. So I enjoyed reading this.

And What’s The State Of My ARCs?

If you remember, a couple of weeks ago I posted a post about The State of the ARC, a meme I used to have, and why I don’t host it anymore. Currently, it’s being hosted by Sarah, and she’s motivated me to take a glance at my own ARCs again! So while she’s still hosting for me, this month I’ll be linking up to her post because I was too curious and just needed to see how my ARC stack was doing.

I have actually been reluctant to even LOOK in that direction for a while. I’ve been a little click-happy at the start of the year, but… as it turns out, my ARCs stack isn’t as bad as I thought! Certainly not worse from the way it was a year ago, when I stopped posting the meme. Here are my numbers: 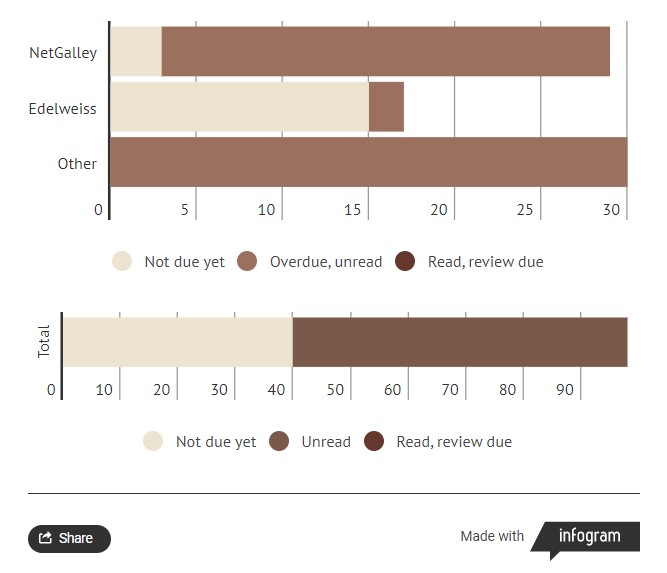 To be honest, I expected much worse. I do have a stack of really, really, REALLY old ARCs from even way before I was a blogger, but those are a lost cause at this point anyway. However, I’m feeling motivated to crack down on some of those old ones now!

A Summoning of Souls is part 3 to a series I am absolutely in love with – about a Ghostly Precinct full of women mediums, who are also sleuths. It’s amazing! You can read my reviews for part 1 and part 2 here, and you should absolutely look into this series because it is spell-binding.

Then I know nothing about Otherwood, but I got really intrigued by the blurb – a middle grade story of kids learning family secrets in the woods? Count me in.

Then, When the Red Gates Opened is a Western journalist’s account of living in China during a time of huge change – opening up to the west in the 1980’s-1990’s, and I’m super excited to read about this.

I was also really excited and lucky to get approved for Magic Lessons – so I finally get to find out the final (or rather, first) part of the story about the first witch in the Owens bloodline of the Practical Magic series.

I have more ARCs, but currently these are the ones that are the most exciting for me!

Do you have any exciting ARCs this month? And don’t forget to visit Sarah’s post and link up there!

Great post and great reviews! I have some very exciting ARCs I want to read this month like Mexican Gothic, Hunted By The Sky and Where Dreams Descend

Thank you! 🙂 And I hope your ARCs turn out good 🙂

Yay for Magic Lessons. I am hoping to listen to that one. Your State of the ARC isn’t too bad considering. Thanks for the mini-reviews 🙂

Haha, I also thought it was a good state of the ARC but then I found out that I missed a couple dozens of copies… Whoops… 😀

The Family Holiday looks beautiful. And after reading your mini review I can say that I want to read it too *sigh* Stay safe and well!

I’m so behind on reviews that I’m bringing back My Monday Minis so I can catch up. Other Wood sounds like fun!

That’s a good idea 🙂 I’ve been doing a lot of mini reviews myself, but I keep them mostly on Goodreads only, cause posting on the blog is just so much work!

Both of your books you mention above look like good ones. And the new ones look good too! 🙂

Hope you are well Evelina!!

Ahh I need to read so SO many ARCs I have been a bit click happy this year. But I have Girl Serpent Thorn and Verona Comics and If We Were Us this month and I’m excited for them!!

Hahaha tell me about it, SAME! After I posted this post I realized I missed a couple of last year’s books! So the list is much longer… Lol

Sarah @ All The Book Blog Names Are Taken

It makes my heart so happy to see this post. You saved me from my ARCs (and gave me some good tips along the way!) I am happy to help, and some day I will figure out those graphs!

Lol, saved you from your ARCs 😀 so happy to hear that 🙂

Keeping up with my ARCs in an ongoing battle. I read and review a bunch and then a new batch is offered. Good luck in whittling down your list!

I loved seeing another Sunday Post by you again! I’m happy to hear that you have many ARCs that you’re currently excited about! I only have one to read but I’m looking forward to it! I’ll probably be starting Deadly Curious next week, as I need to read it in time for the blog tour

Thank you 🙂 haha most of my ARCs are old xD but yes, I have a few exciting ones at the moment 🙂

It feels like ages since I did a Sunday Post – actually I am slowly getting back into blogging and I am still not looking at my state of the arc because it will definitely not look as good at yours. But we shouldn’t put pressure on ourselves and just read the books that we enjoy!

Me too! Except for that one. But it was fun to catch up 🙂 maybe I’ll do another one one of these days. Except I only post on Sundays now that I am lazy xD how many books do you have on your state? Cause mine grew xD