Today I looked back at my stats… and I’m happy with what I see. We will ignore the fact that I think I’m mixing something up in my grand master sheet of ARCs… I think there are actually like 5 ARCs more than I managed to count. Counting ARCs in a list of hundreds is actually a nightmare, especially when Google docs just doesn’t filter the list, despite the boxes saying the same thing without typos, and also regardless or every drop of sanity and the fact that it totally should. But hey, what are 5 ARCs, give or take? If I wanted to, I could end my NetGalley black streak in a matter of months now. As opposed to when I started out with this meme and had like… over a hundred?

I’m starting to think about what I’ll be doing with this meme when I cut back on my overdue ARCs and won’t have stacks upon stacks anymore! I’m sure you’ll still want to join the State of the ARC, because it’s become such a fun community meme and activity. I guess I’ll just have to keep requesting FOR YOU ALL 😂😂😂 cause that’s definitely the reason why. Yup. Although, to be very honest, I have barely been requesting lately, and I’d say even for months now. For some reason, it’s just lost its shine. I hear that happens to “older” (LOL) reviewers a lot. But anyway! Let’s get to the meme and the numbers.

Anyone is free to participate! If you want to, just link up anytime during this month and refer to this page as to the rules of what to put in your post and how to link up. The next State of the ARC post is going to be on (most likely) February 27st, so if you can’t make this one, mark it down!

The reason I was happy with my stats was because I’m now down to less than 30 on NetGalley! My NetGalley dashboard doesn’t say that yet, cause although I’ve drafted the reviews, they’re just not out on the blog yet. But even with all those reviews uploaded, I still think there are at least a few books that I’ve lost among the cracks in the spreadsheet. However, there are so few compared to what it used to be, I’m sure I’ll weed them out with just the help of the NetGalley dashboard itself. Currently, most of the books I have that are way, wayyyy overdue are from authors and other obscure platforms – from back in the day, even before I blogged. Not looking forward to reading most of those, to be honest. Most of them aren’t even in my genres. Maybe I can just weed them out and DNF them. Years later, it probably doesn’t even matter that much anymore. 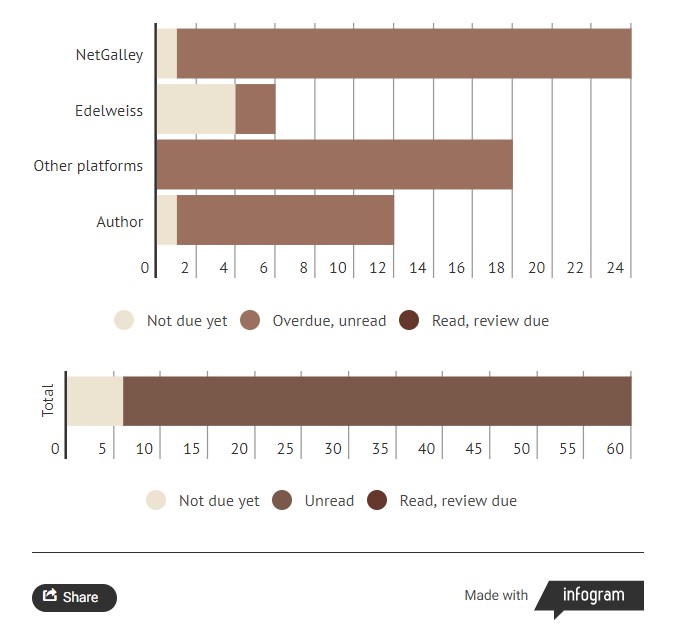 I am quite happy about this month’s bingo progress, although I wasn’t working on it specifically at all! But I guess the first slots are the easiest to fill anyway, right? I might be struggling when I need to fill that fantasy one (I don’t read a lot of fantasy..) or the diversity one (it’s mostly YA that’s diverse, like, ever, and I don’t request YA books..) I feel like the good mental health rep one could be hard to get too, because it’s not an easy beast to find, good mental rep, sadly! 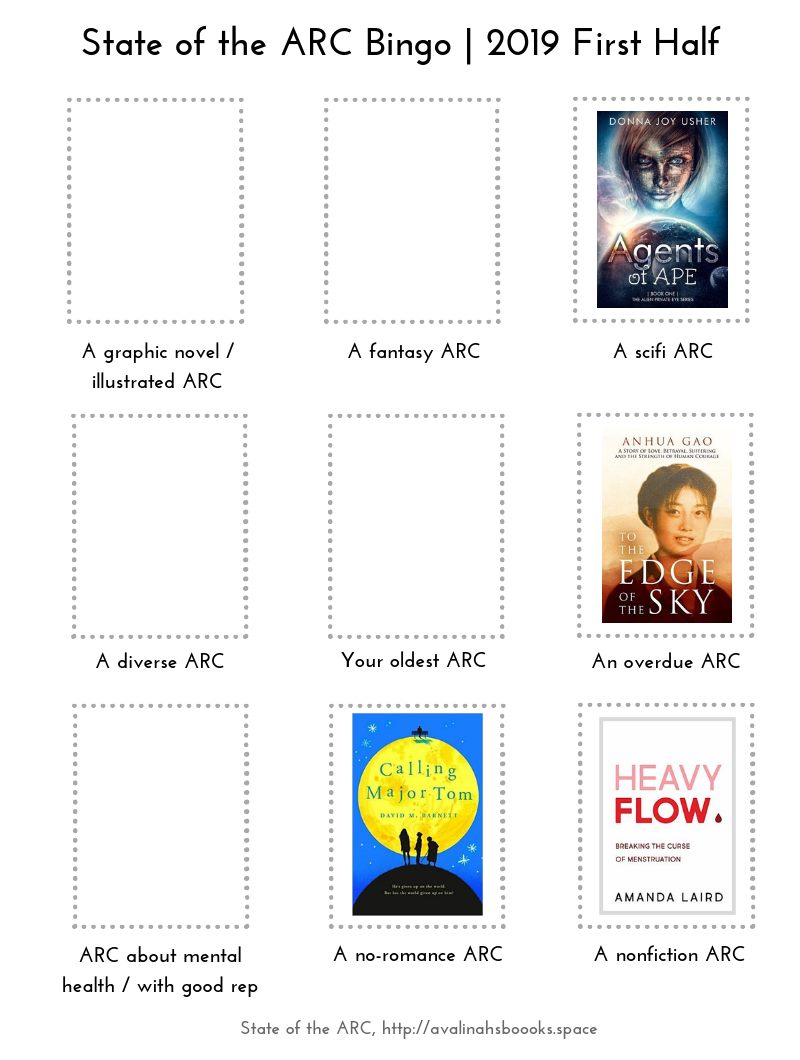 An ARCs bingo sheet with no romance, nonfiction, overdue and scifi slots filled

This month I concentrated on bought books, library books and buddy reads, so I didn’t read too many ARCs. Which is why I’m surprised I somehow finished five! I guess they dragged on from the time of the holidays. It all seems so far away now! Hasn’t January been like a super long month, somehow?

I started the month out with some adventure scifi called Agents of APE which was fun and there’s a short review here. Then there was To the Edge of the Sky, a long overdue book that made me cry and touched me to the depths of my heart. I’ll actually be reviewing it next week! Then there were Interplanetary Robots, a nonfiction for the NASA nerd which was pretty enjoyable, although I’m not nearly nerd enough to have enjoyed it properly. There’s a review on Goodreads here. Then I read Heavy Flow, a book on demystifying menstruation and explaining the negative narrative around it that surely doesn’t have space in the 20th century anymore. I can recommend this book to every female out there, and I’ll be reviewing it in the coming weeks. I will also be reviewing Calling Major Tom soon – also a book that I greatly enjoyed, because it’s one of those books that both makes you laugh and cry while reading it. Deeply touched me!

That puts me at four bricks knocked down off my wall – the reviews are written, now I just need to schedule them!