So, uh… Time flies. I’m sorry to say I have not peeked into my #ARCsAnonymous group even ONCE this month. Too busy! But that doesn’t mean that we won’t be doing State of the ARC. Nope, that’s a must.

Anyone is free to participate in this meme! If you want to, just link up anytime during this month and refer to this page as to the rules of what to put in your post and how to link up. The next State of the ARC post is going to be on February 26th (cause Feb is a short month!), so if you can’t make this one, mark it down! 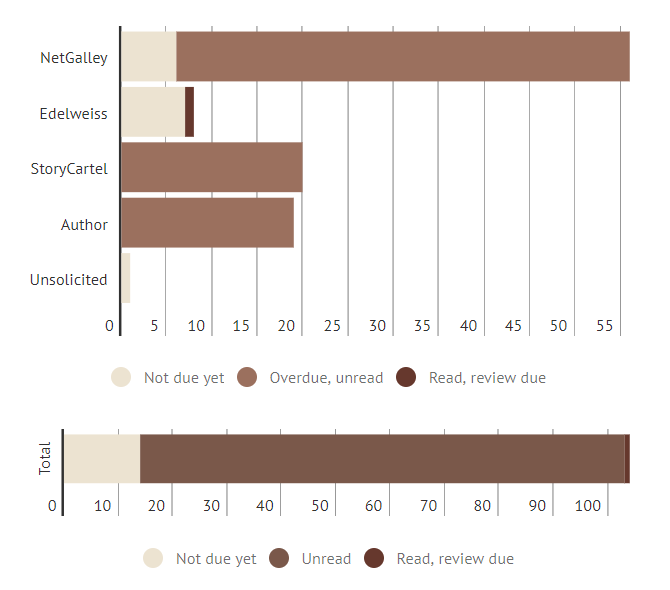 So! As it seems, I have finally taken care of almost all of those books that I had read and not reviewed! NetGalley is also getting so much better, and Edelweiss is totally not due, and clean and happy. However, January seems to be a month when I had a significant review request dump from authors contacting me, and it seems I can’t say no? Those are all due pretty much RIGHT NOW, so they’re not doing wonders for my stats. Oh well!

It seems this month wasn’t bad after all! I read 4 ARCs – two of them were old overdue ones (yay!), and two were current 2018 ones. Not so bad, considering this month I was concentrating on backlist books! I also seem to have reviewed 3 of them, and only one still remains, because I read it early and it’s not due for like two months yet. Good results!

These are 3 of the books – the fourth one was so terrible that there’s no way I’m giving it any space on this post! Actually, House of Shadows was pretty bad too in one regard (and you can read about why in my Goodreads review), but more like problematic, than outright bad that the book we’re not going to mention. Meanwhile. The Mermaid and Mrs Hancock and Rosie Colored Glasses were really nice books and I can recommend them both. Read the review for The Mermaid and Mrs Hancock here and as for Rosie Colored Glasses, I will be reviewing it in February, closer to when it comes out.

I am reading The Girl: Marilyn Monroe, The Seven Year Itch, and the Birth of an Unlikely Feminist, which I’ll admit isn’t coming out till May, but I just couldn’t resist starting it right after I snagged it off NetGalley! It’s a very good book too (not to talk of the #coverlove!) I know I have always admired Marilyn Monroe and felt like there’s more to her personality than we could glean from her most popular films, and this book presents exactly this side of her. It’s about how despite being a sex symbol, Marilyn was a feminist and fought for her (and other women’s) rights in the incredibly sexist world of the 1950’s Hollywood scene. Some pleasant surprises in this book include facts about Marilyn that make me happy I have always felt inspired by her – she was no dumb blonde, unlike most of the unfortunate roles she was cast – she was an avid bookworm, preferred high-brow literature and was very honest and even shy. You can’t help but adore this woman’s charm when you read about how she was always underestimated, labeled and misjudged. I can truly recommend this book!

That’s my ARC January! What has yours been like? Any good ARCs snagged? And did you make a dent in your numbers? I’ll be waiting for your links!