Ah, physics, my love. It’s so easy to forget you. You make yourself a tough mistress to keep – one has to always pay you attention to even remember how to talk to you or read you. But when one does, there is such a big reward. 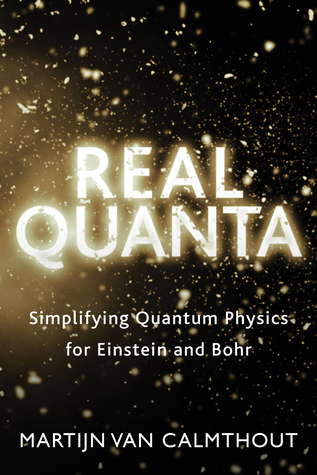 Real Quanta is a nonfiction popular science book for people like you and me – who either took physics in their early university years, or were just fascinated by it and have always wanted a sneak peak into that wonderful world. It’s not a complicated book – don’t expect equations or science speak – it’s written simply and it’s a pretend conversation that the author is having with Einstein and Bohr (well – mostly a monologue), and as he does that, he elaborates more about how and why quantum physics is making its way into our daily lives more and more – without us even noticing. The goal of this book was to make everyone understand that quanta are not some magical and rare things, they are ever-present and they are a part of us, as well as any other thing in this world that surrounds us. So if you want to remember that fascination you felt towards physics, without actually having to go into maths and equations, this is the book for you.

The Love For Physics

Physics is like magic. Especially quantum physics. And reading Real Quanta helped me remember why I loved it so much. Why I studied engineering, although I don’t work in the field, and how I still don’t regret all those physics classes I took (quantum physics as well.) I might not remember the equations now (although I did ace them at the time) but I remember that I basically studied MAGIC. And I remember how it felt. This book brought me right back.

A GIF of a little girl in an old black and white movie, saying “You don’t believe in magic, do you?”

You sense the love for the magic of physics dripping from the pages. And what is the love for physics, if not for the love for how magically the world is built? How incredible it actually is, when you try to look beyond the surface of simple everyday objects that we take for granted and forget how actually complicated everything around us is and how perfectly it keeps ticking, like a precise clock, but without having to be wound up?

So What Is This Book Really About?

Real Quanta is comprised of the author’s monologue, although it’s meant to be his dialogue with Einstein and Bohr, the two great physicists who shaped what quantum physics is today. It’s written in a simple manner, maybe not exactly for a layman because you have to know some basic scientific facts, but there are definitely no equations or anything too complicated. Safe to say it’s popular science, and if you’ve ever loved physics, you’ll be able to read it just fine. There’s a lot of history of physics, but it doesn’t bore you at all – it’s told with interesting detail, for example, did you know that a lot of theories came to be while the physicists were “vacationing”, and with their mistresses, no less? Or that the famous double slit experiment was actually just Feynman’s lecture tool, not actually performed till much later? All of this detail makes the book an easy and engaging read. It’s more of a history of quantum mechanics and quantum physics than any real science stuff of in depth explanations – the whole point of the book though is to show you that quanta don’t exist solely in CERN laboratories – you’re made of them. Your devices function because of them. YOU function because of them. (The part I liked best was that the spinach in your fridge is actually a quantum computer. I am not kidding.)

A GIF of Popeye putting spinach in his mouth

If you’re a student and you take physics – read Real Quanta. It will definitely give you some inspiration for those classes, especially if you’re struggling with them. Or if you used to take physics and loved it – read it as well, if just to remember all of that wonder that it might have made you feel. It made me feel like I want to take up a quantum mechanics class, again. Never you mind that I’d first have to take a few years of maths and general physics to get to where I can remember anything at all!

I remember that I didn’t particularly enjoy Universe in a Nutshell as much as most other readers, but I suppose it makes sense to recommend this if you like reading about physics in general. I did, however, enjoy Stephen Hawking’s Universe a lot, which sort of gives a run down of the history of the latest scientific discoveries up to the point that it was written.

I thank Dundurn for giving me a free copy of the book in exchange to my honest opinion. Receiving the book for free does not affect my opinion. You can buy the book here at Book Depository and buying using this link supports the blog.

Do you read any popular science books? Have you ever thought that physics, especially quantum physics, is the closest we’ll ever get to magic?