When I was asked to review this title, I was both captivated, and also a little apprehensive – captivated, because all the reviews seem to be SO GOOD! If you look at the Goodreads or Amazon pages for No Fourth River? It all seems to be 4-5 stars. Why apprehensive then? Because this book talks about a very sensitive topic – domestic abuse. And I come from a family with some of that history – and I myself have a history of being quite badly bullied. So reading a book that talks in detail about real, actual experiences of heavy domestic abuse? Seems strong. Maybe even too much for me. But as usual, curiosity won out, and I agreed to take part in the book tour. And you know what? I do not regret it. 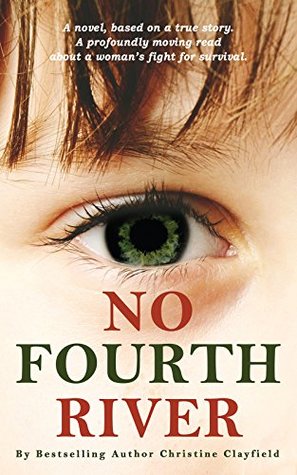 Christine grew up in a rich household – like the coveted ones, ones thought to bring The Good Life™. The Dream. But the grass is always greener on the other side, and the reality of Christine’s life proved to… basically have no grass at all, in this regard. Tyrannical, alcoholic abusers in the home are a tragedy, and an even sadder tragedy when there is money involved – because we in this society still believe that if someone’s rich, they’re probably great people to deserve it, and so we do nothing to help those trapped in a household like this. This is what Christine’s life growing up was, more or less – a glorified prison with sufficient emotional, as well as physical abuse. A household like that drove her to an even worse marriage – not just one with domestic abuse, but actual poverty this time, which made it all the harder a lifestyle to deal with. But did this bring Christine down? For a while it did. Until she had enough. Which is when she swore she would not cry a fourth river of tears. And that she would own her life from then on.

No Fourth River Sets An Example: It Can Be Done

This is as much of an ode to domestic abuse victims, as it is an inspiring account of finding your own strength and moving on. Victims of domestic abuse, bullying and other forms of manipulation often feel like they’re powerless – even long after they’ve escaped the situations that were jailing them to that way of life. Finding the strength to both stand back up on your feet, as well as fighting not to bring yourself back down again, is the hardest thing. Which is why we need to hear more success stories, written by people who have escaped these situations, said NO, and turned everything in their lives completely around. This is precisely what this story is about.

You Will Not Be Able To Put No Fourth River Down

For the first chapter or two, I struggled to read it, because it was just emotionally hard – through reading all the embarrassing, painful and degrading childhood experiences of Christine, I was reexperiencing my own failures, bullying and embarrassment. Remembering that stuff is hard, and if you have such experiences in your life, you might also find it hard at first. But as you go, you find yourself unable to stop reading No Fourth River. It’s engaging, and it forces you to empathise. You MUST know what happens to Christine. You MUST find out if she’ll be okay. And exactly how that’s even possible, when the situation is this tough.

It’s purely spectacular to see how Christine has gained a different perspective on the events of her own life – how she looks at her past self and realizes how gullible, manipulated, mistreated she was. I loved the openness of the narrator, which is, of course, simply an older self of Christine – and I admired how she could talk about all these potentially very embarrassing things in her life – for example, do you know any person who actually had a bedwetting problem deep into their 20s and weren’t embarrassed to talk about it to you? You can really tell that Christine has moved on from these experiences, and is also to look back at them through a healthy point of view. What this makes you feel is endless respect for her and the way she’s come, as well as making you feel like, YES, THIS IS POSSIBLE, THIS IS DOABLE. Which is why I say that it’s important to put this kind of narrative out there – accessible to young women, and to possible domestic abuse victims.

Finding Your Strength As A Woman

We have it easy now in the 21st century, you know. A lot of the things that were taboo in the 60’s or 70’s are now talked about. A lot of the barriers have been taken down. So the tale Christine Clayfield tell in No Fourth River is even more inspiring, considering what she had to face back in the day. And how, despite being told she’s no good, being physically beaten to the brink of death, she still managed to rise up and take up business in one of the most masculine industries of the 80’s – computers and IT. And starting her own company as well. If nothing else, Christine’s story is truly inspiring. I am so happy that my blog was considered worthy to host a blog tour review for someone who has turned their life around like this.

A Message Of Forgiveness

The thing I feel the most respect for Christine about, however, is that she managed to forgive the ones who wronged her, and even be grateful for the challenges they presented in her life. My life has actually enfolded in a very similar manner to Christine’s – in many ways. I’ve seen my share of abuse, and even my long distance love story went similar to hers. But I guess that is the difference of being 58, as opposed to 29. Christine forgave her tormentors and even tried to understand them – without forgetting what they did or justifying them. That is truly admirable, and a good message to send to her readers. I can only hope this is still in my future.

Not all of the book was equally as easy to read. The start might have been hard because of the emotional baggage it carried, but it’s almost equally as hard to read the second part of the book, when Christine becomes suddenly very successful and loved. The change is very sudden, and it’s just hard to switch – at least it was for me, emotionally. And like I mentioned, even though my own love story was very similar to hers, I wasn’t comfortable reading too much about it. I feel like maybe the love letters or the personal questions they asked each other shouldn’t have been shared, but maybe that’s just my thing. I believe Christine wanted to give as many pointers as possible to young women who need to get their priorities straight. Perhaps that would have also benefited me several years ago. I do agree that to a young female who is still trying to find out what’s good for her in a partner, these could be a good thing to think about.

Of course, you must have realized by now that there WILL be triggers. This is an account of real life domestic abuse, both growing up, and in a romantic relationship. Also, bullying at school and being abused by teachers. And then there’s attempted rape. If you have lived through any of that in your life, you should consider it carefully if you want to read this book. However, if you do feel like you’re in a strong enough place right now – this story is well worth it, because it is inspiring and a good role model.

A lot of you might know Chimamanda Ngozi Adichie’s Purple Hibiscus – it touches upon many related topics, although it is fictional, and No Fourth River is a factual story. You might also be able to enjoy Rosie Colored Glasses – also a fictional story, but written loosely based on growing up with a mother with a substance abuse problem and depression, who is sadly driven to give up on life due to a suffocating family environment and a husband who fails to understand that life can be lived in more than one ‘proper’ way. And, the recently very coveted A Thousand Perfect Notes also talks about related issues in homes, and presents these problems in a young adult point of view (to be reviewed next week!). All three books very recommended.

I thank Christine Clayfield, RASC Publishing and Bookollective for giving me a free copy of the book in exchange to my honest opinion. Receiving the book for free does not affect my opinion. You can buy the book here at Book Depository and buying using this link supports the blog. Have you read any strong domestic abuse stories, especially ones based on true facts? Have you ever experienced anything like it or known anyone who has?