The Million was a really quick read that seemed to be promising, but sort of burned up before it got anywhere. I would certainly enjoy seeing sequels and finding out more about this world though! 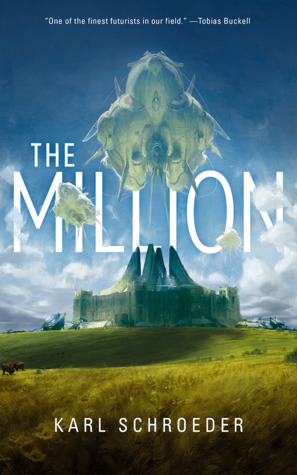 The world has changed – it’s now a shared home. Most of the time, it’s inhabited by only a million of chosen people, each of the families owning vast expanses of land and even armies to defend them. But every thirty years they’ve got to step away and let the ‘lock-steppers’ live out a month of their lives the way they want to – partying, polluting, destroying – by sheer numbers of them. This is a treaty, signed by the people of Earth, and it’s the way life works in the world of The Million.

But being one of The Million is a prestigious thing, so every birth is calculated. And the main character, Gavin, is an illegal child. Which means, he has to be hidden away. But certain things happen that pull Gavin out of hiding and make him pretend to be something other than he is. He loses a lot of what’s dear to him and puts his brother in grave danger. And now he has to fix everything.

My General Impressions Of This Book

I think The Million could have been a really good read! The biggest problem it has is that it’s incredibly slow moving and info-dumpy at first, and then super fast-paced by the end. I remember reading it and seeing that it’s almost finished, but the main plot hasn’t even come close to getting resolved! I think this book would have benefited from choosing a different format – had the author opted to go for a full-length book, the story could have kept a more even pace. If the whole story was longer, there would have been no problem with the info dumps – that could have worked as a means of world-building. Meanwhile, with The Million turning out to be so short, it just sort of gives you all of this information about the world, and then nothing really happens. It was slightly disappointing that way.

A GIF of Joey from Friends shrugging

Some Really Great Ideas, But…

Like I said – had it been a full-length book, it could have been great. The world was truly interesting! The idea that families have their own armies to defend each other, and treaties amongst themselves is pretty interesting, as well as the ‘lock-steppers’, who are actually a pretty interesting concept too – living in suspended animation for thirty years, to be awoken for only a month – they are sort of like time travelers. The Earth is described in great detail, as well as how the cities have been preserved and what’s important to the people of the current time. I am not sure if this book will have sequels – but it might, and I’d be curious to read them to learn more about this world.

A GIF of a scifi world with a forest, a waterfall and a castle-like building in the middle of it

I would love to read the sequels, but this book remains a three star for me. I wish I could write a longer review, but that’s literally all I’ve got! There could have just been so much more in it. If a reviewer walks away from a book without really knowing what to say in the review, that probably tells you enough. I wish there was just more!

I thank Tor.com for giving me a free copy of the book in exchange to my honest opinion. Receiving the book for free does not affect my opinion. You can buy the book here at Book Depository and buying using this link supports the blog.

Have you ever read any novellas which you wished were full-fledged books? What were they?