October was a busy month, but despite that! It’s actually been a really good reading month, and most of those reads were ARCs as well. I’m happy to say I’ve done well! Except of course, I also hauled quite a few. So I don’t know where I actually am right now, in regards to my ARC reading xD I guess we will see!

Anyone is free to participate! If you want to, just link up anytime during this month and refer to this page as to the rules of what to put in your post and how to link up. The next State of the ARC post is going to be on (probably) November 30th, so if you can’t make this one, mark it down!

It seems I have been doing a lot of reading, but last month I also hauled some awesome ARCs. So my numbers are not looking so great right now 😅 but a lot of those ARCs aren’t even due yet, so that’s great! Although I really need to work on that backlog of the oldest ever titles. I am currently at 75% feedback ratio on NetGalley, though! So that’s exciting. Almost there! 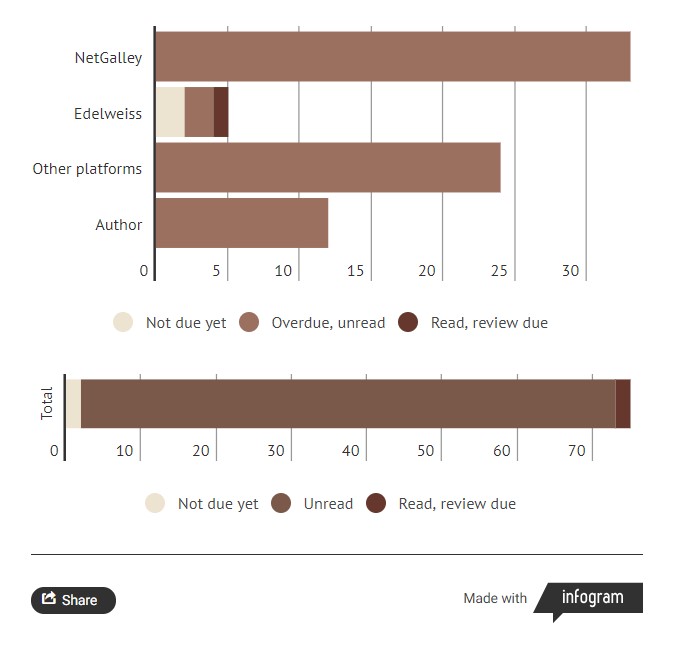 I am quite surprised to see that I only have one slot in the bingo! I was pretty sure it would be hard to fill up the #ownvoices slot – it’s always hard to find books written by a person that’s been through something and is telling it from their own perspective. But I was glad to realize that Polyamorous was written by an #ownvoices author (especially because that made it all the more accurate as well), and then I also filled up the fluffy ARC slot with a middle grade story about popularity at school. Now it looks I’ve only got to tackle my oldest ARC! It keeps coming back to that… heh. 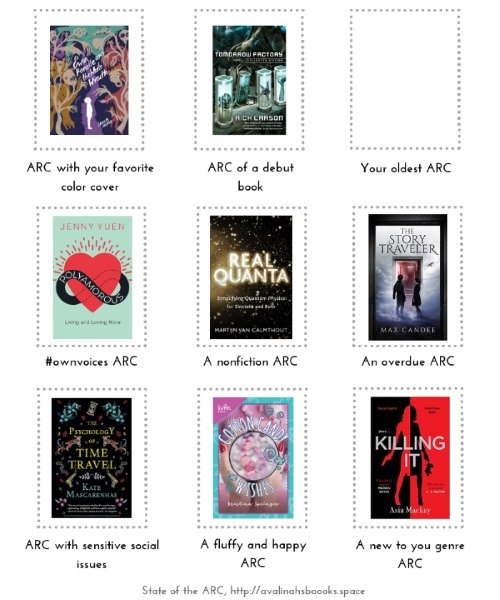 My ARCs this month have been really awesome! The Worrier’s Guide to the End of the World turned out to be flat out amazing, and I could relate to it so well. I wrote a really heartfelt post about anxiety in relation to that book, and you can read it here. Then War Cry was a three star read, cause perhaps it wasn’t really for me, but it was enjoyable. The Truth about Archie and Pye was pretty entertaining – like a little mystery / spy novel with maths and adventure. And Battlestar Suburbia from the same publisher has been one of my reading highlights of the month! The review comes out next week. My Friend Sleep was a beautiful kids picture book, and Cotton Candy Wishes was a rather forgettable, but very comfortable and nice middle grade about popularity at school and staying true to yourself. Creatures of Want and Ruin was also a great sequel to one of my favorite books of last year, Creatures of Will and Temper, and while maybe not as incredible as I thought the first one to be, still a really good and engaging read. And finally, Polyamorous was a non-fiction read, you guessed it, about polyamory, and it was definitely very interesting, because I knew nearly nothing on the subject, but got a chance to find out more.

So I read 8 ARCs again, just like last month! And six of them I’ve already written reviews for. Only two to go! So two lego bricks and six more normal ones knocked off the big wall of ARCs.

Currently the most exciting ARCs I’ve got are these. What Would Boudicca Do? – a book about the women in history who did more than they were expected to do, even though they were not given any liberties to do it. The Eleventh Trade is a really touching and well-written story about a refugee boy, trying to reclaim something that he and his family lost. And List of 18 is an absolutely amazing story about dying before your time and finishing your business, all the while learning some things about yourself as well. I love all three!

That’s that! So what ARCs did you get and which ones are you excited this October?