Some say that a person becomes his circumstances. Or, at least, that someone’s circumstances make them who they are. Because it’s enough to only thrust someone into an unfamiliar, different environment, and they seem to become a whole different person. Have you had this happen to you? Have you ever felt how when you go on vacation, you’re suddenly so much more emotionally stable, mature and perhaps more like you’ve always wanted to be? Or is it the contrary – maybe you’re prone to wandering around aimlessly, without knowing what your days are even supposed to be about now, now that you don’t have the routine of work around you, so handy in grounding you and helping you remember who you are? So it’s just like I said, your circumstances make a great part of who you are, whether you’re consciously aware of this or not. And in a way, this is what The Enchanted April is about – among other things. 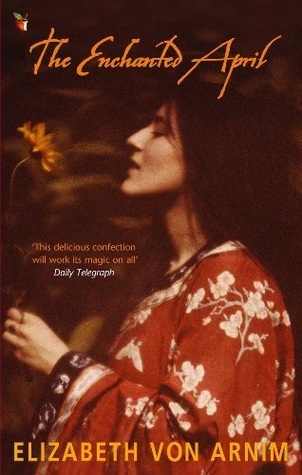 Check out on Goodreads
Free Download on Project Gutenberg
★★★★★ 5 stars

The Enchanted April is about four women who could not possibly be any more different from each other, getting put in the same, let’s say, somewhat heavenly circumstances of a spring in an Italian castle in the countryside. Each has her own emotional baggage – and make of that what you will. Some of them will instantly clue into what’s happening to themselves and others. Some will keep trying to lie to even their very own selves for a long as possible – to maintain the status quo. What follows is a colorful dance of coincidences, emotions and conclusions. The Enchanted April is an incredible window into the condition of having a human soul and learning to figure out how to use one without a manual. With a couple of laughs along the way.

The Woman – Trapped In The Beginning Of The 20th Century

But it’s not solely about that. The Enchanted April devotes a lot to talking about a woman’s world – perhaps a lot more of how it was in the 1920’s and 30’s, but I feel like a lot of it is still relevant today. These women have all, at least in some way, been attempted to be moulded into something they’re not – for the sake of propriety, religion, a good family name – some of them already shaped into what they believe they now are, after a long life, some rebelling against being treated this way, and some just simply trying to survive and make the best of it, because society has nothing better to offer for women like that at the given time.

The book shows plainly, emotionally and compassionately just how much the women have been conditioned not to spend a mere second or even a small coin on themselves, not to give themselves even a moment of fun, because their lives are supposed to be all about serving others – and to think that there could be anything more than that is very rude, indeed. Even the way these women are referred to, at first, before they reach the castle – a symbol of their freedom  – points to this, because before they arrive, they are all merely a “Mrs” – the first time their given names are used is when they finally realize they’ve arrived. Not even the woman’s name belongs to herself, after shes married – she ceases to exist. She transforms into the owned property of her husband.

But from what I’m saying, you might infer that its a slow, deep and possibly very literary novel. Literary it might be, but it’s a light and flowing read, and its certainly as funny as it is touching and sincere. The narrator is witty and seems to know more than the characters themselves at any given time, but it’s also not a mean tone at all – their behavior is criticized or even poked fun at in a very compassionate way – so that you might even think, “oh, I’m also guilty of doing this sometimes!” If you’ve read anything by Dodie Smith, you’ll find the tone very similar in nature, and quite possibly incredibly enjoyable.

The Enchanted April is an incredible window into the condition of having a human soul and learning to figure out how to use one without a manual. With a couple of laughs along the way! Click To Tweet

We All Have A Tame And A Wild Side, And We Only Know Our Own Experience

But it’s also about the fact that people are not just “one person” – I mean that every single person is a muddle of all sorts of traits, and you can’t essentially know someone inside out. Some situations call for one side, some – for another side of a persoreality. Nobody is set in stone!

The Enchanted April also includes everyone’s point of view wonderfully – some of which we might have never even considered. For example, the challenges a truly beautiful woman faces in society – challenges that most other women will envy her, thinking it’s all a blessing, when it’s actually a curse in disguise. Elizabeth von Arnim’s talent is plain to see – to be able to put yourself in so many people’s shoes, to be able to describe and explain their experience so thoroughly – one must be nothing short of a genius. It’s also incredibly elucidating to read about. Some of these things I would have never come to think about! Especially when it comes to the experience of the coveted lady, which, as it turns out, might not be so desirable after all.

Elizabeth von Arnim's talent in The Enchanted April is plain to see – to be able to put yourself in so many people's shoes, to describe and explain their experience so thoroughly – one must be nothing short of a genius. Click To Tweet

I wouldn’t say the book had many triggers at all – it’s written in a very lighthearted manner. There is mention of None of these mentions are really graphic and will probably not trigger you, because everything is discussed with good humor and bright outlook.

Oh, anything by Dodie Smith, really! The one that I felt was closest in style would be The Town in Bloom, and you can read the review for it here. Then I also thought The Sunday Lunch Club was somewhat similar – although the style is very different, it talks about a lot of similar problems, mostly family and marriage problems, as well as group and community ones. You can find my review for it here. And then there’s also Going Widdershins – while a lot more tragic, sad and triggering, it has the same vibe when it comes to how women were treated in society at a similar time, and also dishes out a lot of well-thought-out quotes about being human in general, as well as finding yourself and your place in the world. My review of it can be found here.

The Enchanted April is free for download to anyone because it’s available free here on Project Gutenberg.

Have you read The Enchanted April? Do you like lighthearted books that talk about serious things?